‘Nowhere in rebel-controlled Syria is there a secular fighting force’

Also read the news of this Traitorous Bastards connection to Soros and the Clinton’s! Soros, Clinton-Linked Teneo Among Donors to McCain Institute 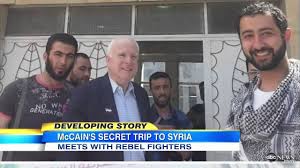 World Net Daily Via InfoWars – One of the Muslim terrorists who perpetrated the London Bridge attack previously fought in a militia associated with the Free Syrian Army, a group that Sen. John McCain, R-Ariz., has worked tirelessly to arm and support.

According to the London Telegraph, terror suspect Rachid Redouane fought first in the Libyan revolution under a group known as Liwa al Ummah. He later joined a militia that deployed fighters to Syria and worked alongside al-Qaida jihadists.

Liwa al Ummah was formed by an underling of Abdul Hakim Belhaj, the former emir of the al-Qaida-linked Libyan Islamic Fighting Group. The Liwa al Ummah in Syria merged with the FSA in 2012 and collaborated with al-Qaida’s Syrian branch, Al-Nusra.