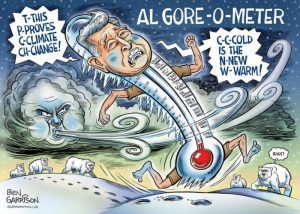 Daily Caller – On Friday, Al Gore’s sequel to “An Inconvenient Truth” – “An Inconvenient Sequel: Truth to Power” – arrives in movie theaters across the country. But there’s another inconvenient sequel worth noting and, like most sequels, this one is even worse than the original.

Gore’s hypocritical home energy use and “do as I say not as I do” lifestyle has plunged to embarrassing new depths.

In just this past year, Gore burned through enough energy to power the typical American household for more than 21 years, according to a new report by the National Center for Public Policy Research. The former vice president consumed 230,889 kilowatt hours (kWh) at his Nashville residence, which includes his home, pool and driveway entry gate electricity meters. A typical family uses an average of 10,812 kWh of electricity per year, according to the U.S. Energy Information Administration.

Read more at the Daily Caller.