The NUT did not fall far from the NUT Tree!

I want to try and be as nice as I can in describing this Bimbo, so I will use scripture and not write what I am thinking! 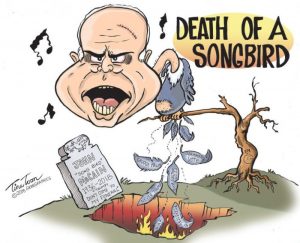 This goes for ALL of the Dirty necked, Stringy Haired old Whores on the View! Ooooop’s — I did write what I was thinking!!!

Proverbs 9:13 “A foolish woman is clamorous: she is simple, and knoweth nothing.”

Proverbs 27:15 “A continual dropping in a very rainy day and a contentious woman are alike.”

Proverbs 30:20 “Such is the way of an adulterous woman; she eateth, and wipeth her mouth, and saith, I have done no wickedness.”

Matthew 12:34 “O generation of vipers, how can ye, being evil, speak good things? for out of the abundance of the heart the mouth speaketh.”

Excerpts from Gateway Pundit – McCain has been involved in a long-running feud with President Donald Trump over her late father Sen. John McCain (R-AZ), while Behar is consumed with Trump Derangement Syndrome over her hatred for the President.

Text of McCain’s Trump assassination comment, made in reference to Democrats’ impeachment efforts, as reported by TGP (video at end):

Meghan McCain: “…I will say, if you take this kill shot, Democrats, ya better not miss. (Co-host Joy Behar: “Yeah”) Ya better hit his jugular and if there’s even a finger still moving at the end of it you’re gonna ruin your chances in 2020. But you better do this well, if you’re gonna do it. And my faith in Democrats…”

Following a helpful clarification from co-host Whoopi Goldberg who interrupted to save her, McCain immediately apologized, saying, “I don’t mean literally! I’m so sorry! Oh my God! I’m so sorry! (Stuttering) I don’t mean…Oh my God! I mean like a metaphorical. I talk, I’m a shoo…, I’m a hunter and a shooter, I’m sorry about my metaphors. And I talk like a redneck, so sorry. But I will say, you have to, you have to, you have to definitely do this. If you’re gonna impeach him, you have to impeach him. It can’t just be proceedings that don’t end up successful. And again, please don’t take that the wrong way, that’s how I talk.”

PELOSI SAYS “TRUMP WANTS US TO IMPEACH HIM”: House Speaker Nancy Pelosi said on @JimmyKimmelLive that Pres. Trump actually wants to be impeached because he believes the Republican-controlled Senate would bail him out — the co-hosts discuss if they agree. https://t.co/2C0XhvyKnP pic.twitter.com/deHCsnePp6