Yes, the Terror attack on America was an Inside Job!
And there was help from the Saudi’s and others as well.

We are learning more and more as time passes. But will the traitors and criminals pay for what they did? As long as the same cabal stays in power they will continue to get away with it. Perhaps if Trump gets elected, heads will roll and ropes will swing! 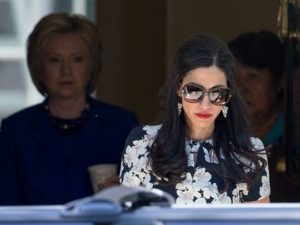 Brietbart News July 2016 – The declassified “28 Pages” released by Congress Friday afternoon concerning 9/11, terror funding, and Saudi Arabia contains a bombshell piece of information: The World Assembly of Muslim Youth (WAMY) is specifically named as having connections to terror funding and support for a number of worldwide terror groups.

As Breitbart News has reported exclusively, the “Abedin family business” is an academic group called the Institute for Muslim Minority Affairs that is based in the London offices of the World Assembly of Muslim Youth and its parent organization, the Muslim World League.Huma Abedin, born in the United States but raised in Saudi Arabia, has worked closely with Hillary Clinton since 1996 and is now Hillary Clinton’s closest aide and the vice-chairwoman of her presidential campaign. Abedin, who is married to disgraced former Congressman Anthony Weiner, is also at the heart of the Clinton email scandal.

According to the FBI. Abdullah Bin Ladin has a number of connections to terrorist organizations. He is the President and Director of the World Arab Muslim Youth Association (WAMY) and the Institute of Islamic and Arabic Science in America. Both organizations are local branches of non-governmental organizations (NGOs) based in Riyadh, Saudi Arabia.
According to the FBI, there is reason to believe that WAMY is “closely associated with the funding and financing of international terrorist activities and in the past has provided logistical support to individuals wishing to to fight in the Afghan War.” In 1998, the CIA published a paper characterizing WAMY as a NGO that provides funding. logistical support and training with possible connections to the Arab Afghans network, Hamas, Algerian extremists and Philippine militants.

Although the 28 Pages make no mention of Abedin at all, the information in the 28 Pages lays out a timeline of events during the planning and execution of the 9/11 terror attack that shows that, at all times, Huma Abedin was working for both Hillary Clinton and the WAMY organization the Institute for Muslim Minority Affairs.

In the past, all efforts to vet or ask basic questions about Abedin have been shut down by the mainstream media and politicians on both sides of the aisle, including Republican Sen. John McCain and Democrat Congressman Keith Ellison.

A footnote on page 24 of the 28 Pages is inconclusive but doesn’t rule out the possibility that WAMY’s senior leadership may have supported terrorism.

According to the FBI’s November 8th, 2002 response, although several officials in WAMY support Al-Qa’ida and other terrorist groups, the intelligence is insufficient to show whether the organization as whole and its senior leadership support terrorism.

Although the footnote makes it clear that the depth of WAMY’s full support for terrorism wasn’t fully known in 2003, the matter is clearly a subject that should have been both investigated and discussed, especially given the connection between New York Senator Clinton, and one of her top aides at the time, to the group.

Further, it’s very clear that WAMY supports the Wahhabist strain of Islam that is both the state religion of Saudi Arabia and is behind nearly every terrorist group today, including al-Qaeda, ISIS, Hamas, and the Taliban.

As Breitbart News previously reported exclusively, while Hillary Clinton was Secretary of State, she even admitted that Saudi Arabia was using the Muslim World League and WAMY to fund terrorism, writing in a 2009 memo:

Saudi Arabia has enacted important reforms to criminalize terrorist financing and restrict the overseas flow of funds from Saudi-based charities. However, these restrictions fail to include &multilateral organizations such as the International Islamic Relief Organization (IIRO), Muslim World League (MWL) and the World Assembly of Muslim Youth (WAMY.) Intelligence suggests that these groups continue to send money overseas and, at times, fund extremism overseas.

For decades, the Saudis have spent millions of dollars promoting Wahabbism through organizations like WAMY, its parent the Muslim World League, and other “charities” that promote Da’wa or Islamic evangelism throughout the world via activities such as building mosques.

The mainstream media has either ignored these clear connections between Huma Abedin and Saudi NGOs or, worse, smeared the people making the charges, most notably the Center for Security Policy’s Frank Gaffney and former Congresswoman Michele Bachmann.

Further, the fact that the Bush administration’s compliance with the Saudi’s request to bury the information that is damaging to The Kingdom raises new questions of what influence the Saudis has on President Bush. Read the rest here.