With the move to defund and disband police, we can now see the fulfillment of the long legged Mac daddy,  along with George Soros’ plan to cause race riots and the rise of a Brown Shirt Brigade! See video below! 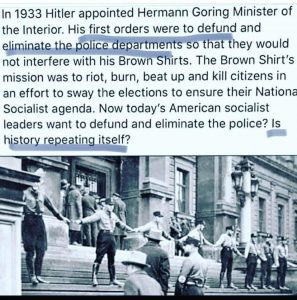 On July 2, 2008 in Colorado Springs Colorado, then Presidential candidate Barack Hussein Obama said in a speech, “We cannot continue to rely on our military in order to achieve the national security objectives that we’ve set. We’ve got to have a civilian national security force that’s just as powerful, just as strong, just as well-funded.” “People of all ages, stations, and skills will be asked to serve.”

Lee Cary | American Thinker  – July 20, 2008 – Barack Obama’s recent words to promote his image as Community Organizer in Chief were not about forming a paramilitary force of volunteer brown shirts. They were about turning America into one, giant, community organizer’s sandbox at enormous cost to taxpayers.

Senator Obama was nearly 17 minutes into his July 2 speech (yet another one where naming Dr. Martin Luther King, Jr. was required) in Colorado Springs, Colorado when he deviated from his pre-released script and performed without the teleprompter net saying,

“We cannot continue to rely on our military in order to achieve the national security objectives that we’ve set. We’ve got to have a civilian national security force that’s just as powerful, just as strong, just as well-funded.” (emphasis added)

The immediate context for that amazing statement was a preview of parts of his plan to vastly expand community service opportunities for Americans of nearly all ages. He said,

“People of all ages, stations, and skills will be asked to serve.”

The range of his community service initiatives was outlined in an earlier American Thinker article. In his campaign document entitled “The Blueprint for Change: Barack Obama’s Plan For America,” Obama’s “Service” section runs a close second to “Education” in complexity.  But, with his Colorado Springs’ statement, it grabbed first place in its projected costs to taxpayers. Obama did the cost projection himself.

He plans to double the Peace Corps’ budget by 2011, and expand AmeriCorps, USA Freedom Corps, VISTA, YouthBuild Program, and the Senior Corps.  Plus, he proposes to form a Classroom Corps, Health Corps, Clean Energy Corps, Veterans Corps, Homeland Security Corps, Global Energy Corps, and a Green Jobs Corps.  Here a corps – there a corps – everywhere a corps corps.
So it made sense in Colorado Springs when he said his call to community service “will be a central cause of my presidency.”  He couldn’t be clearer in signaling his intentions, including a Social Investment Fund Network to link local non-profits with the federal government.

The entire plan is breathtaking in its scope. But it does not, as at least one internet writer has suggested, portend a “giant police force.” It would be easier to rebut if it did.  As it is, it’s silly stuff born of naively fanciful dreams. Read more here