Look in those eyes. You can see the Jinn, the demons, looking out at you! This Muslim is Possessed!

Arizona: Muslim murders his wife and two daughters, says Allah told him to do it

Jihad Watch – “He said that the reason he shot these individuals is because in God’s eyes, it was all right for him to deal with someone in this manner who had been involved in adultery, extramarital affairs.” 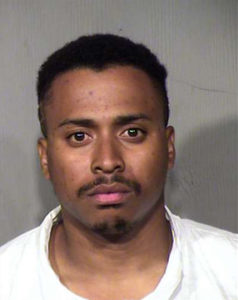 Apparently Smith was trying to cleanse his family’s honor, which is done by killing the offender. And there will be much, much more of this in America: Muslims commit 91 percent of honor killings worldwide. The Palestinian Authority gives pardons or suspended sentences for honor murders. Iraqi women have asked for tougher sentences for Islamic honor murderers, who get off lightly now. Syria in 2009 scrapped a law limiting the length of sentences for honor killings, but “the new law says a man can still benefit from extenuating circumstances in crimes of passion or honour ‘provided he serves a prison term of no less than two years in the case of killing.’” And in 2003 the Jordanian Parliament voted down on Islamic grounds a provision designed to stiffen penalties for honor killings. Al-Jazeera reported that “Islamists and conservatives said the laws violated religious traditions and would destroy families and values.”

Until the encouragement Islamic law gives to honor killing is acknowledged and confronted, more women will suffer.

PHOENIX (FOX 10/AP) – Phoenix police say a man has been arrested on suspicion of killing his wife, his two young daughters and a man who the suspect thought was romantically involved with his wife.

The couple’s three-year-old daughter was not hurt and was found hiding under a bed when police arrived at the scene. According to court documents released Friday evening, the youngest daughter was not killed because she reminded Smith of himself.

Police say the suspect killed his family at their home near 75th Avenue and Camelback before going to another location near 67th Avenue and Osborn and fatally shooting the man because he believed was having an affair with his wife.

Sgt. Thompson says the suspect was arrested while driving away from an apartment complex where the man had been shot dead and two others were shot and wounded. The suspect made an appearance in front of a judge Friday evening.

Neighbors say Smith was always very friendly, but the rest of the family kept to themselves.

“Helped the neighbors, ‘hey amigo, you need something’,” said Carmen Gallego. “He even gave my husband some jump started cables on Sunday for his truck.”

The suspect said his religion was a factor in committing the crimes.

“He said that the reason he shot these individuals is because in God’s eyes, it was all right for him to deal with someone in this manner who had been involved in adultery, extramarital affairs,” said Phoenix Police Sergeant Tommy Thompson.

Smith also told police he killed his seven-year-old daughter because she was “weeping for the wicked”.