They have Transformed Their Cities Into Crime-Ridden, Disease-Infested Wastelands!

– And Meanwhile, Over 1200 Medical Professionals ‘Cut Their Own Throats’ 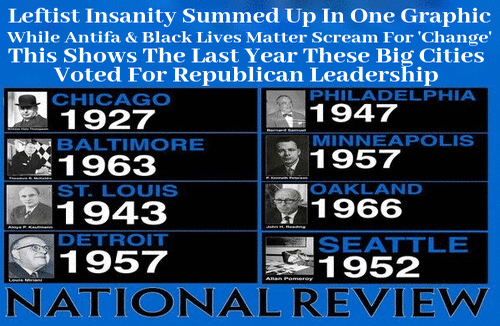 By Stefan Stanford – All News Pipeline – Live Free Or Die
If the definition of the word ‘insanity’ really is ‘doing the same thing over and over and over again, but expecting different results’, then 100’s of millions of Americans have proven themselves to be ‘insane’, with city-dwellers continuing to vote Democrats into office, for DECADES, but getting no ‘change’.

With literally millions of Americans now protesting in America’s big, Democrat-run cities for ‘change’, it’s not just a coincidence that Democrats have been running most of America’s big cities for decades as seen in the graphic above, as we’d also reported in this November 12th, 2019 ANP story.

Titled “Democrats Have Unleashed A ‘Blue State Blueprint For Disaster’ Upon America: Just Imagine What The Entire Country Might Look Like In The Future Should One Of THEM Win In 2020!“, we warned within it that should a Democrat win in 2020, exploding homelessness, poverty and 3rd world diseases would become ‘the new norm’ across America as they are in the cities Democrats run across the country.

And while that November ANP story was written prior to the arrival of covid-19 and months before ‘George Floyd riots’ took hold across the country, it foreshadowed parts of what we’re now witnessing in America while highlighting this August of 2019 story over at AMAC, the Association of Mature American Citizens. 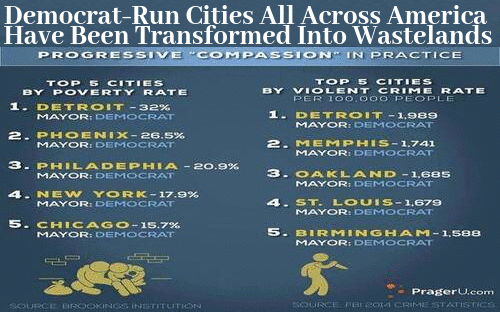 That AMAC story reported that America’s 25 worst cities are ALL run by Democrats. So why do the antifa/blm protesters now pushing for ‘change’ keep electing the same demons who got them into the mess they’re now in the first place? ‘Mass insanity’ across America?

The extended excerpt below comes to us from this AMAC story before we continue in the final section of our story with an exploration of an absolutely bizarre story that completely demolishes any argument by doctors across America that our country should be ‘locking down’ over Covid-19.

Simply put, well over 1,200 medical professionals across America have just disgraced their own profession by arguing it’s okay if the current protests/riots spread COVID-19 because racism is itself a public-health issue that needs to be addressed. We have embedded that letter for you to read at the bottom of this story, complete with the names of all of those ‘medical professionals’ signing it. From AMAC.

Considerable debate swirls over around crime, poverty and America’s cities – with politicians suddenly blaming each other, and generalizations flying.  Here are facts, which help deliver the truth.

First, while 535 members of Congress feud and fume over how much federal money to spend on federal entitlements, anti-crime, anti-poverty, anti-drug, and anti-social disintegration programs, a strong argument exists for focusing on local leaders – not Congress – for answers.

Mayors – more than US Senators, Congressmen, and even Governors – have a vested interest in finding solutions for the cities they are elected to lead.  Accordingly, this column reflects research into 55 cities, covering five studies, credible data bases, and mayoral records.

The findings are arresting – and a basis for rethinking how to pull America’s worst cities out of darkness.  Notably, Americans of all ages live in cities. Pew’s Research Center reports 97 percent of US counties – and cities – saw an increase of 65-and-older populations since 2010, a trend that is accelerating.  Older Americans are affected by these facts, along with younger.

What did I discover? (ANP: Keep in mind this was written prior to the covid-19 lockdowns!) America is experiencing the best economy in 50 years, lifting every major minority group with record low unemployment, growth, dollar valuation, and accelerating wages.  This should turn the tide in America’s cities – but the turn is slow.

Instead, we are witnessing higher homelessness in “sanctuary cities,” and policy stagnation across major impoverished, often unsafe cities – Baltimore to Buffalo, Birmingham to Brownsville.

So, one policy misfire is not thinking out implications of opposition to border security, while sheltering illegal migrants and blocking deportation of those facing final orders.  Another policy misfire is assuming that one-time shelter funding will stop the inflow of illegal migration; actually, offering safe harbor is having the opposite effect.

Bigger discoveries were made. Of the top-ten “most dangerous cities” in America, according to Forbes, all have Democratic mayors.  Those cities are Detroit, St. Louis, Oakland, Memphis, Birmingham, Atlanta, Baltimore, Stockton, Cleveland and Buffalo.

Race may have little to do with it, although poverty and unemployment are tied to violent crime prevalence.  Roughly half the mayors in this top-ten analysis were Caucasian, half African American.

And of the top 25 “most dangerous,” most are Democrat-led and all but one have poverty rates between 18 to 39 percent.  The national average is 12.3 percent.

So, these Democrat mayors are leading cities deep in poverty, weak on tax base, infrastructure, employers, trained citizens, and policies to attract corporate investment.  They lead the nation in murder, manslaughter, robbery and aggravated assault.

So, what does this tell us? On the numbers, ten incontrovertible things.

First, the top ten homeless cities are sanctuary cities, all led by Democrats.

Second, the top-ten “most dangerous” are led by Democrats.

Third, the top-25 “most dangerous” are mostly Democrat-led, and among the poorest and least employed, with weak infrastructure, tax base and incentives for private investment.

Fourth, among the 25 “most dangerous,” most face stifling poverty of 18 and 39 percent, against the national average of 12. 3 percent.  These Democrat-led cities are America’s poorest.

Fifth, most of these cities suffer unemployment rates from 4.4 and 9.3 percent, versus 3.7 nationally.

Sixth, of the 20 “least healthy” cities, all but four are Democrat-led.

Please read the rest of this must-read story by the Association of Mature American Citizens here. 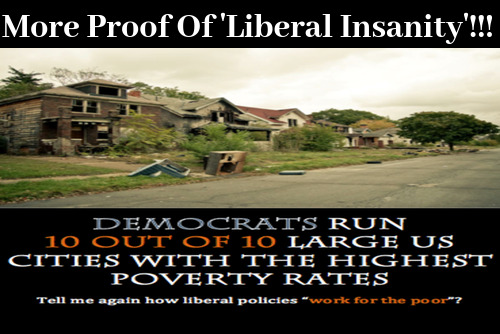 Yet as we mentioned in our opening, those living in big cities all across America keep electing Democrats, and as the numbers pointed out above prove, Democrats keep running their cities into the ground. So why do ‘black lives matter’, antifa and people living in the big US cities keep on electing those who are turning their cities into impoverished, crime-ridden and disease-infested wastelands?

And now we get the latest bit of absolute proof that this entire covid-19 ‘lockdown of America’ has been a huge sham as reported in this Daily Caller story As we also hear from Tucker Carlson in the 1st video below, so-called ‘health experts’ who’ve called for the lockdown of America over covid-19 also are backing the massive anti-police riots now going on across America, despite tens of thousands involved. The excerpt below comes to us from this National Review story.

Ramesh alluded to an open letter signed by over 1,000 “public health professionals, infectious diseases professionals, and community stakeholders.” The letter argues that it’s okay if the current protests/riots spread COVID-19 because racism is itself a public-health issue that needs to be addressed.

Let’s take that argument seriously for a moment and ask a follow-up question: Why, then, was there so much criticism of the anti-lockdown protests? The premise of those protests was that continuing lockdowns caused far more economic damage than was necessary. If anything is a public-health issue, surely record unemployment, social isolation, and bans on people going to hospitals for non-urgent care should count. Well, here is how the letter distinguishes between anti-racism protests and anti-lockdown protests:

. . . [W]e do not condemn these [anti-racism] gatherings as risky for COVID-19 transmission. We support them as vital to the national public health and to the threatened health specifically of Black people in the United States . . . . This should not be confused with a permissive stance on all gatherings, particularly protests against stay-home orders. Those actions not only oppose public health interventions, but are also rooted in white nationalism and run contrary to respect for Black lives.

It’s difficult to understand how any reasonable person could have committed those words to print. Even just, “Yeah, we’re hypocrites, so what?” would have been a more satisfying response. Ironically, the signatories do say they have “privately mourned the widening rift between leaders in science and a subset of the communities that they serve.” That rift is now a chasm. If these leaders do have any real expertise, how sad that it’s been lost within the all-consuming political correctness of our age.

And while we’ve been quick to criticize Dr. Anthony Fauci over the entire covid-19 fiasco, at least he pointed out that all of these protests could be ‘seeding’ covid-19 throughout communities though with so many ‘medical professionals’ alluding to the fact that spreading covid-19 for ‘social justice’ is ok, we actually get more evidence that the democrats/globalists simply want us all dead to complete their ‘depopulation agenda’.

So with gun sales skyrocketing now all across America as sane Americans get prepared to defend their families, loved ones, community and country from the leftists who are insanely burning their own cities and grocery stores to the ground, as we hear in the final video below also from Tucker Carlson, the ‘cultural revolution’ has come to America and we’re all now witnessing its devastating effects upon America and Americans being played out before our very eyes.