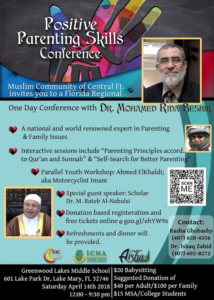 But there is nary a word about this in the Orlando papers. They’re much too busy tracking down and publicly shaming foes of jihad terror.

“Sheik Who Called For Gays and Jews to Be Killed ‘Special Guest Speaker’ At Orlando Middle School,” by Laura Loomer, Dangerous, April 13, 2018 (thanks to Blazing Cat Fur):

Less than two years after 49 people were slaughtered by an Islamic terrorist at a gay nightclub in Orlando, the Greenwood Lakes Middle School in coordination with Muslim community groups in Orlando have decided to host a Syrian sheik who has called for the killing of gays and all Jews.

In a flyer created for a “Positive Parenting Skills” conference, Islamic scholar Dr. M. Rateb Al-Nabulsi is listed as a “special guest speaker” at the event, which is being held by the Security Advancement Center (SAC), Islamic Circle of North America (ICNA), and Aisha Cultural Center in Orlando.

The event is described as a day-long conference with Muslim community organizers with an emphasis on parenting and family issues according to what is said in the Koran and Sunnah.

Al Nabulsi, the Muslim extremist guest speaker, is notorious for making anti-American, anti-gay, and anti-Jew comments, all of which have been caught on camera and translated into English.  Nonetheless, he has been invited back into the very same community that is still struggling to recover from a jihadi who wreaked havoc on innocents at the Pulse nightclub.

In April 2011 while speaking to a group of Muslims in the Middle East, Al Nabulsi said, “ Homosexuality carries the death penalty,” and explained why gays should be punished with death, calling homosexuality, “a filthy place that leads to the destruction of the homosexual.” In Islam, the death penalty for homosexuals is usually carried out by hanging a gay person from a crane, decapitation, and throwing gays off buildings.

During the same 2011 lecture, Al Nabulsi went on to criticize Western nations that allowed for gay people to have equal rights, even laughing at countries who have gay diplomats and leaders.

Al Nabulsi, who declared his opposition to gays during his lecture, added, “It’s frightening” how gays have equal rights to heterosexuals in Western nations such as Canada and the United States and said Muslims “are extremely lucky in [their] countries” that homosexuality is punishable by death.

Along with advocating for the death of gays, Al Nabulsi labeled all Jews as “legitimate targets” for suicide bombers and encouraged Palestinians to commit such attacks because he argued Palestinians have an overwhelming disadvantage in their fight against Israel.

As if that isn’t already enough to disqualify him form entering the U.S. and speaking at a middle school, on his website, Al Nabulsi stated that Muslims have a duty to carry out acts of jihad in their fight against what he views as evil Jews.

Al Nabulsi’s radical pro-Islamic terror beliefs have been well documented in places other than his website and YouTube. Aside from his homophobic lecture at the Al Aqsa mosque in 2011, he went on an 11 city tour of America with a U.S. State Department sponsored visa in 2014 that was co-sponsored by the Syrian American Council and Shaam Relief Foundation, who described Al Nabulsi as “an internationally-known Muslim scholar, renowned for his scholarship of Islam, who has lent his formidable clerical authority to support human rights, tolerance and respect for all.”

However, on his website, Al Nabulsi referred to Jews as “the worst enemies of God” and said “all Jewish people are combatants” who deserve to be attacked and bombed in acts of jihad….