Whether or not he had Sex with her is Classified Information!! 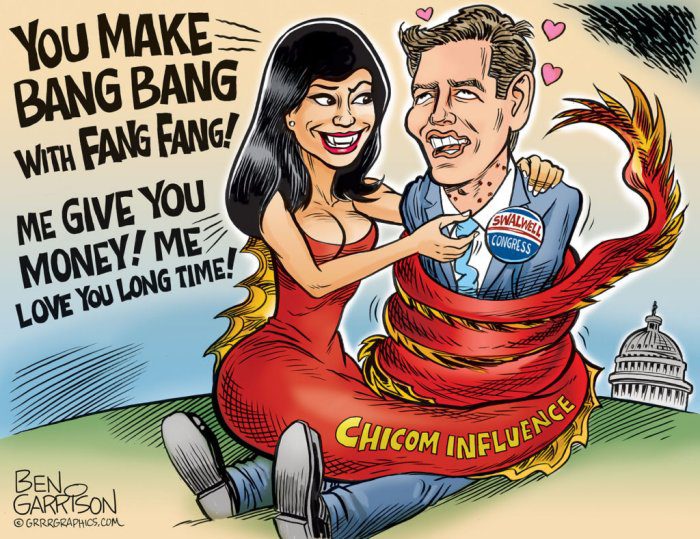 Tucker Carlson tells all about it in the Video below

Rep. Swalwell Called Trump a Russian Spy, His Fundraiser was a Chinese Spy

Daniel Greenfield | Front Page – Rep. Swalwell accused President Trump of being an agent of the Russians. And was one of the most obnoxious elected officials to beat that dead horse.

Rep. Eric Swalwell, D-Calif., reacted to the revelation that an FBI agent involved in the “Crossfire Hurricane” Russia investigation “actively listened” for certain topics during a briefing on election interference given to the Trump campaign in August 2016, saying “they were right to do it.”

“Does Trump act as a Russia agent? Yes,”  he tweeted back in September.

What happened next isn’t too surprising.

A woman suspected of being a Chinese intelligence operative allegedly targeted several local and national politicians in the first half of the last decade, including Rep. Eric Swalwell (D-Calif.), according to a report from Axios.

The woman, Fang Fang or Christine Fang, reportedly specifically attempted to curry influence with Bay Area politicians from 2011 to 2015, including participating in fundraising for Swalwell’s 2014 reelection campaign, according to the publication.

“Rep. Swalwell, long ago, provided information about this person — whom he met more than eight years ago, and whom he hasn’t seen in nearly six years — to the FBI,” Swalwell’s office said in a statement to Axios. “To protect information that might be classified, he will not participate in your story.”

It’s very convenient that Swalwell can’t discuss his own scandal because he claims that it’s classified.

Why would a Chinese spy have wanted to target Swalwell?

Swalwell rose to prominence rapidly, and in late 2012 became one of the youngest members of the U.S. House. In January 2015, Swalwell was assigned a seat on the House Permanent Select Committee on Intelligence, serving as the lead Democrat on the subcommittee on CIA oversight.

Remember, Fang hooked up with Swalwell before this. Why did Swalwell want to sit on the Select Committee on Intelligence? Or did his backers want him there?

Fang facilitated the potential assignment of interns into Swalwell’s offices, the political operative said. In at least one case, an intern recommended by Fang was placed into Swalwell’s D.C. office, this person said. A current U.S. intelligence official confirmed the intern placement.

Beyond Swalwell, this story provides some insight into foreign enemy operations in America.

Fang attended regional conferences for U.S. mayors, which allowed her to grow her network of politicians across the country.

She also engaged in sexual or romantic relationships with at least two mayors of Midwestern cities over a period of about three years, according to one U.S. intelligence official and one former elected official.

At least two separate sexual interactions with elected officials, including one of these Midwestern mayors, were caught on FBI electronic surveillance of Fang, according to two intelligence officials.

Her targets were, predictably, Democrats, and specifically lefties.

She volunteered for Ro Khanna’s unsuccessful 2014 House bid, according to a former campus organizer and social media posts.

Ro Khanna is under consideration by Biden.

Fang helped with a fundraiser for Rep. Tulsi Gabbard (D-Hawaii) in 2013, according to a flyer from the event Fang shared on Facebook. She appeared in photos over multiple years with a host of California politicians, including Khanna, Swalwell, Rep. Judy Chu (D-Calif.) and then-Rep. Mike Honda (D-Calif.).