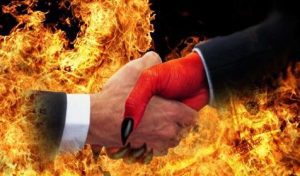 Decrepit multi-millionaire Speaker Of The House Nancy Pelosi, creepy Senate Minority Leader Chuck Schumer and their minions of anti-American media filth have bamboozled America into accepting the crumbs of a long and chaotically negotiated “stimulus package” benefiting other countries more than Americans.

Jon Bowne | Info Wars – Neglecting a United States rocked by Covid shutdowns and economic disaster, the career politicians broke the stalemate and put a gun to the head of the American taxpayer and their duly elected president.

The Democrats pushed the stimulus into the Christmas season knowing full well that President Trump would have no other option than to sign it or bear the brunt of carrying the burden of allowing 12 million Americans to lose their jobless benefits.

Billions of foreign aid will now pour out of our tax dollars filling the coffers of new world order pet projects.