It ain’t the 60’s anymore folks! Momma and Poppa have given birth to Communists, Socialists and Perverts!

What one generation allows in moderation, the next will practice it in EXCESS! – Jon Watkins

Steve Byas | The New American – The 1960s folk group The Mamas and the Papas used their harmonious voices in the song, “California Dreamin’” — a time when the Golden State was still seen as a destination point by many Americans, attracted by its mild weather, its beautiful beaches, and its dynamic economy.

But now, a January poll by Edelman Intelligence reveals that many of California’s own residents now regard it as “California Nightmare.” Fifty-three percent of 1,500 residents polled have said that they are considering leaving the state. This is in stark contrast to the days of the Great Depression, when hundreds of thousands of Americans from other states, seeking to escape the twin terrors of poverty and the Dust Bowl made their way to California. An estimated one million left Oklahoma alone — thus the name “Okies” came to be applied to many of the migrants. So many “Okies” moved to Bakersfield, it was facetiously referred to as the “third largest town in Oklahoma.”

About 62 percent of those polled said they believe that the best days of California are now over.

What caused such despair? The reasons are multiple. Seventy-two percent polled said that the high “cost and availability of housing is a very serious issue for California.” Heavy-handed environmental regulations are a huge contributing factor to the increased cost of housing, with high property taxes as another. When one just records the responses in the Bay Area, that number rises to 76 percent. Some of these Bay Area residents leave San Francisco, Oakland, and other cities and move to other parts of California, but others opt to simply leave the state.

Democrats ARE Enemies of God, Humanity, America and the whole world for that matter! The DNC Cesspool is full of Liars, Perverts, Hoaxers, Race-baiters and Fake News purveyors! YOU are Communist/Socialist Trash, and should be treated as such, until YOU repent, turn from YOUR wicked ways and become Born Again!

Mark 6:11 “And whosoever shall not receive you, nor hear you, when ye depart thence, shake off the dust under your feet for a testimony against them. Verily I say unto you, It shall be more tolerable for Sodom and Gomorrha in the day of judgment, than for that city.”

When one wonders why Texas has become less of a “red,” or Republican state — with the powerful example of the 2018 senatorial election, in which Republican Senator Ted Cruz eked out a victory over Democratic Congressman Beto O’Rourke by less than three percent — part of the answer is that Texas is a popular destination for these Bay Area emigrants. While they are attempting to escape the heavy taxation of California, particularly the area in and around San Francisco, they often take the liberal politics of the region with them when they move.

And there are other factors that are contributing to the exodus, and the consideration by others of joining the move out of the state. San Francisco has now earned the reputation of the city with piles of human excrement on its streets, with some people even defecating in front of residents’ homes. In 2015, there were over 60,000 complaints about this problem reported to police. Drug use is such a problem that free syringes are now made available to drug addicts by the city. Crime is rampant, including car burglaries — an average of 85 a day. Panhandling is ubiquitous.

Of course, as the productive move out, some are moving into the Bay Area, to take advantage of generous benefits offered to the homeless, such as food, shelter, and even $70 a month in cash.

It is not just the Bay Area. In Los Angeles, the “City of Angels” could justifiably be re-named the City of Rats. Across the city, residents have to contend with the exploding population of rodents, even in city offices.

Amazingly, one of the most frequently questions asked on Google by California residents was “Should I move out” of California? Read the rest at The New American

Yes, Get OUT NOW! It is a Shit-Hole full of Communists! All you have to do is look at the Ahab’s and Jezebel’s they have to represent them! Gadfly Gavin Newsom, Nasty Nancy Pelosi, Mad Maxine Waters, Kooky Kamala Harris etc! I am seeing ads here in Texas begging people to VISIT that Shit-Hole! Run People Run! Get out of the Shit-Hole before it is to late!

Be like Granny. Load your wheelbarrow and head on out!

Years ago I visited the Sodomy State and did not like it. Just like when I must go to Galveston Island here in Texas, I get an uneasy feeling and can discern the EVIL that is present. I do what I have to do and get off that Shit-Hole as fast as I can.

The last time we were in the Sodomy State, to move my mother and father in law here to Texas, I had that same feeling. Stayed there just long enough to load the trailer with their belongings and then hightailed it out as fast as I could!! 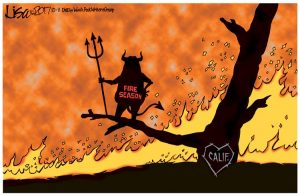 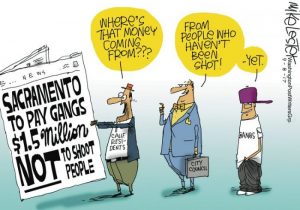