The Communist Democrats and the Flat Earth Lunatics have Commonality!! 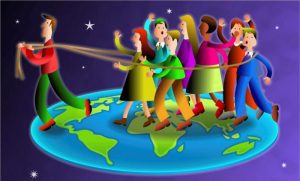 One Chart Shows How Radical Socialism Has Taken Over The Democrat Party With Moderates Begging: “Dems, Please Do Not Drive Me Away” The question posted in the bottom half of the New York Post cover shown above, was “Who wants to lose the election?“,  and it perfectly captures a theme we are noting in the aftermath of the first two Democrat debates held in Florida on Wednesday and Thursday. From “moderate” #NeverTrumpers that would be willing to vote for a Democrat rather than back President Trump for re-election, to “moderate” Democrat voters, which outnumber the radical online socialist Democrats 2 to 1, we are seeing shock and disgust over the socialist lurch to the left on the part of the Democrat candidates.

The reason the media, pollsters and liberals all across the Internet, failed so spectacularly in understanding candidate Trump’s appeal during the 2016 presidential election, was because they all ascribed to explain Trump supporters “intent,” while labeling them all “deplorables,” but they never bothered to ask us, the actual supporters, why we backed him.

They were blind-sided because of their own inability to see.

Rather than make the same mistake the aforementioned groups made of assuming intent, and pretend I understand the radical left’s mindset, I spend time on their websites, their forums, observe their social media interactions and read their articles, so that when I claim intent, or explain their thinking, I am using their own words, articles and explanations.

The same goes for moderates, of either party, and those “moderates” are speaking out about the lurch toward socialism from the democrat candidates running for President.

(If you appreciate stories like this, please consider donating to ANP to help keep us in this battle for the future of America.) According to Gallup, which has been polling on political ideology since 1992, as of the end of 2018, 35 percent of Americans describe themselves as conservative, 35 identify as moderate, and only 26 percent identify as liberal.

The break down of the demographics is extremely interesting and makes one wonder exactly who the candidates are polling before publicly lurching towards socialism in the manner that we heard from the first two debates.

In almost every demographic either conservatism has a net gain, or the moderates do, with only “democrats” topping 50 percent that consider themselves “liberal.” While the 2016 campaign proved that polling is not an exact science and pollsters suffer their own blinding biases, so the numbers should be taken with a grain of salt, these types of polls, taken over decades, do indicate patterns of behavior, which makes it clear that the Democrat candidates running for President in 2020, are quite literally prepared to play to their base of 26 percent of radical liberals, at the risk of alienating 70 percent of all Americans.

New York Times op-ed columnist David Brooks, described as a moderate, or centrist, headlined a column recently with “Dems, Please Don’t Drive Me Away,” where he highlights the Gallup poll and accurately states “The party seems to think it can win without any of the 35 percent of us in the moderate camp, the ones who actually delivered the 2018 midterm win.” (Archive.is link here)

Op-ed columnist for the WSJ, Peggy Noonan, highlights the same disconnect in an article titled “The 2020 Democrats Lack Hindsight,” stating “They ignore reality and march in lockstep with their base. Did they learn anything from 2016?”

Noonan describes her takeaway from the first debate night:

But what Night One did was pick up the entire party and put it down outside the mainstream and apart from the center.

This is what the candidates said:

They are, functionally, in terms of the effects of their stands, for open borders.

They are in complete agreement with the abortion regime—no reservations or qualms, no sense of just or civilized limits.

They’re all in on identity politics. One candidate warned against denying federally funded abortions to “a trans female.”

Two said they would do away with all private health insurance.

Every party plays to its base in the primaries and attempts to soften its stands in the general. But I’m wondering how the ultimate nominee thinks he or she will walk this all back. It is too extreme for America, and too extreme for the big parts of its old base that the Democrats forgot in 2016.

It was as if they were saying, “Hi, middle-American people who used to be Democrats and voted for Trump, we intend to alienate you again. Go vote for that jerk, we don’t care.”

Exemplifying that disconnect between the Democrat candidates and all but their radical liberal base, was the choice of socialist policy positions they highlighted in Florida, a state that has the highest concentration of Cuban Americans in the US, with over 1.2 million Hispanics of Cuban origin.

Cubans that fled socialist Cuba, or children of those that escaped the socialist nightmare….and what did the Democrat candidates do in Florida? They pushed for openly socialist policies, which Cubans in Florida say will “Destroy America.”

“I’ve been working and fighting against the communists since I was 11 years old,” said Emilio Izquierdo, a 71-year-old Cuban-American exile, as he stood outside the legendary Versailles restaurant in the sweltering heat of Little Havana.

For decades, people like Izquierdo have come to this place to see friends, eat authentic Cuban food and talk politics. On Wednesday, as patrons ordered Cuban sandwiches and café con leche, Izquierdo was getting fired up talking about the rise in socialism in the United States — something, he said in an interview with Fox News, he fears will “destroy America.”

Other Key quotes from Fox News:

• “They don’t like the socialism,” 81-year-old Antonio Roque, who was born in Cuba and came to America in 1962, said of the Cuban-American community while standing at the counter of Versailles, amid a steady stream of tourists and locals. “I don’t like it.”

• Another patron, 53-year-old Gonzalo Lopez, who was also born in Cuba, said he decided against watching the Democratic debates because “I don’t like any of the Democrats right now…I don’t like socialism.”

• “It’s a fight between democracy and socialism,” Lopez said. “I’ve got nothing to do with the second one.”

In the second night of the debates, every single candidate raised their hands in support of providing free healthcare to illegal aliens that American taxpayers would have to pay for.

A recent Rasmussen survey asked 1,000 likely U.S. voters their opinions of California’s latest law to provide free healthcare to illegal aliens under the ge of 26.

About 55 percent, or 5-in-9, likely U.S. voters overall said they opposed providing even the lowest income illegal aliens with taxpayer-funded health care in their state. Only about 31 percent of likely voters said they supported the giant subsidy program.

Related: The Democratic Candidates Are in a Bubble on Immigration

From totally unrestricted abortion “rights,” even up until birth, to unlimited illegal immigration and open borders, to “free stuff” for all, including healthcare and free college and wiping out student debt, the majority of Democrat candidates seem to be trying to lurch further towards socialism than the previous one, alienating large chunks of the American public.

One chart from the NYT gives a great visual as to how rapid a lurch to the left liberals took from 2008 to 2016.

The lines in blue and red are America’s political parties. That ladies and gentlemen is why Donald Trump won the 2016 Presidential election, and in the course of the last two years, the radical left has moved even further, directly into pure socialism.

Glenn Reynold’s over at Instapundit, highlighted a message left to him by a Facebook friend, stating “My biggest takeaway from the candidates in the Dem debates is there doesn’t seem to be any joy in any of them. They all seem to live in a perpetual state of anger, resentment and envy that absolutely poisons their lives. Those aren’t attractive qualities in political candidates. Say what you want about Trump but he rarely looks like he’s not having a good time. Optimism can be both attractive and contagious.”

This is yet another area where the candidates appear to be taking their cues from their online radical base, rather than the 2 to 1 number of moderates that do not share those radicalized ideas and positions. Online the anger, snark, hatefulness, threats, including death threats are the “norm,” from liberals, all the while claiming that any viewpoint that doesn’t match theirs is “hate speech.”

When Trump-haters like Joe Scarborough from Morning Joe, pan radical liberal positions taken during the debates, notice the screaming and anger, and call the debates a “disaster,” and conservative commentators highlight the same type of radical socialist ideology displayed, then you have a “bipartisan” conclusion that the Democrat candidates are completely disconnected with normal Americans, because they are playing to the most radical of their liberal base.