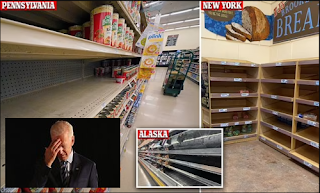 This important story over at the Epoch Times published July 1st titled “‘Doomsday Document’ Predicted Food Shortages Two Years Ago” holds enough information about ‘globalist pre-knowledge‘ of the current food catastrophe the world has been cast into to make anyone reading it become a ‘conspiracy theorist‘, oops, correction, a ‘truth seeker‘.

With the Rockefeller Foundation report and document from 2 years ago being all about the food shortages we’re witnessing now, including how they planned to wipe out the meat industry in favor of ‘fake foods’, after reading that report and PDF document from 2 years ago that largely hit the nail on the head about what we’re witnessing now across America and the planet one can only realize this has been a long-planned globalist operation.

As that Epoch Times story reports, while we’ve been told the food shortages we’re witnessing now are the results of ‘climate change‘ and the ‘Russia-Ukraine conflict,’ back in July of 2020, the Rockefeller Foundation had already predicted it, and was calling for a revamp of the food system as a whole to address it.

Warning the COVID pandemic would cause “a hunger and nutrition crisis” in the U.S. “unlike any this country has seen in generations,” it also called for the ‘U.S. food system to be “reset.”’

And with ‘Reset the Table’ published one month after the World Economic Forum (WEF) officially announced its plans for a “Great Reset,” and many of the contributors to the Foundation’s paper also WEF members, it’s easy to see what’s going on here if one only pays a little tiny bit of attention.

And with that document also promoting the idea that insects should be recognized as a healthy, sustainable protein alternative that can save the environment and solve world hunger, who reading this story will be thrilled to gobble down some grasshoppers, mealworms or crickets as the main staple of your meals in the future? Briefly, from this Epoch Times story before we continue.:

It seems nothing escapes the prophetic minds of the self-proclaimed designers of the future. They accurately foresee “natural disasters” and foretell coincidental “acts of God.” They know everything before it happens. Perhaps they truly are prophets. Or, perhaps they’re simply describing the inevitable outcomes of their own actions.

Right now, we’re told looming food shortages are primarily the result of climate change and the Russia-Ukraine conflict. Yet, back in July 2020, The Rockefeller Foundation had already predicted it, and was calling for a revamp of the food system as a whole to address it.

‘Reset the Table’ Is Part of The Great Reset

The document in question, titled “Reset the Table: Meeting the Moment to Transform the U.S. Food System,” published by The Rockefeller Foundation July 28, 2020, describes how the COVID pandemic had caused “a hunger and nutrition crisis” in the U.S. “unlike any this country has seen in generations.”

Mind you, COVID was declared a pandemic March 11, 2020, so by the time this Rockefeller report was published, the pandemic had only existed for four months, and while certain high-risk groups did experience food insecurity, such as children whose primary meal is a school lunch, widespread food shortages, in terms of empty shelves, were not widely prevalent or particularly severe in the U.S.

So as their story further points out, we’re clearly witnessing the Hegelian Dialectic at play, with the globalists causing the problem, waiting for the reaction from ‘the sheep‘ and then giving them ‘the solution’ they had planned out long ago. See how this works? In the first video at the bottom of this story from Epoch Times they break down for us how this has all been ‘manufactured‘.

(ANP FUNDRAISER: Due to heavy censorship by ‘big tech’ upon ANP articles, we’re running a fundraising drive. We also want to thank everybody who has donated to ANP over the years. With donations and ad revenue all that keep ANP online, if you’re able, please consider donating to ANP to help keep us in this fight for America‘s future at this absolutely critical time in US history. During a time of systematic, ‘big tech’ censorship and widespread institutional corruption, truth-seeking media and alternative views are crucial, and EVERY little bit helps more than you could know!)

According to this July 8th story over at Yahoo News titled “Grocery bill climbing? These graphs show how the price of staple pantry items has risen”, all across America consumers are paying much more for food with the consumer price index under Joe Biden and Democrats rising 11.9% in the last year alone, “the largest 12-month increase since the period ending April 1979 ” according to the U.S. Bureau of Labor Statistics.

Warning within their story that the ‘food categories‘ with the largest increase in prices include cereal, meats, eggs and dairy, their story failed to mention all of the ‘mysterious attacks‘ upon food processing plants and our food supply chain as we’d reported on in this June 22nd ANP story within which we warned that facilities tied to our ‘meat production‘ were being hit the hardest, and that at a time when globalists were quite literally pushing ‘crickets‘ as a ‘new superfood‘.

Yet with the mainstream media continuing to label all of these food processing plants being hit as a ‘conspiracy theory‘, if that’s the case, it aligns alarmingly with the goals of ‘Reset the Table‘.

Detailing for us nothing less than a drive to ‘resetting the table‘ towards ‘food tyranny‘, just imagine globalists half a world away telling you and your family what you have to eat and you’ll see another reason why its so important to make sure you’re fully stocked up and prepared for such a scenario now.

With it looking more and more like these globalists are working towards trying to ‘price‘ certain food items out of range for most Americans to purchase, instead pushing ‘crickets‘ as a cheap and ‘sustainable‘ protein alternative, look at the skyrocketing prices from this Yahoo story.:

White sugar average prices have increased from 58 cents to 68 cents package per pound. That’s a 10-cent jump or 17.2%.

So with that Rockefeller Foundation report proving undeniably the globalists had foreknowledge of the coming food catastrophe that America and much of the world have found themselves embroiled in, and the results we’re seeing now actually being the ‘intended results‘ of their ‘great reset‘ and drive to ‘reset the table‘, it doesn’t take too vivid an imagination to see where this is all headed, especially with the globalists long espousing the theory, “control the food…you control the people.”

According to this important July 8th story over at Barron’s, car repossessions are now exploding across America and ‘that’s a bad omen‘. Warning within that story all of these car repos are ‘an underappreciated ticking time bomb,’ that story also reported a perfect storm of people falling on hard times, the end of pandemic stimulus programs and skyrocketing car prices combined with shortages are driving America towards disaster despite “Everybody thinking the free gravy train would never end.”

Warning also within that story that ‘The bubble is beginning to show signs of bursting soon,‘ warning that ‘the increase in auto loans and the increase in delinquencies and defaults track an increase in defaults on personal loans and credit cards’ as well, that story also pointed out that people are often spending 30 to 50% or more of their income on their car payments alone, much less on housing and food, which have also seen prices going through the roof under Biden and the globalists in 2022.

So with anyone who falls into that category surely not investing their money in food and ‘survival’, and having much less money to spend on food in the current day, as Natural News recently reported, all of this is leading to violent attacks in grocery stores and fast food joints as seen in the 2nd video at the bottom of this story.

And with all of the issues discussed within this story showing us exactly why ‘food independence‘ is so utterly crucial to not only surviving but thriving in the days ahead, especially with it long warned that only 9 meals separate a civilized society from total anarchy, we can take huge steps to secure our families future now by stocking up on what’s still available with the following meats and other long term survival foods available as soon as a delivery to your house including.:

Bacon On The Go Variety Pack