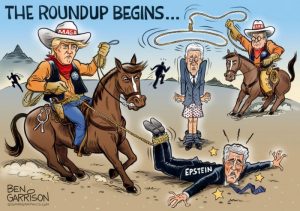 But before these sex scandals were the highlight of Epstein’s celebrity, he was better known not just for his financial prowess, but also for his extensive funding of biotechnological and evolutionary science. With his bankster riches, he founded the Jeffrey Epstein VI Foundation which established Harvard University’s Program for Evolutionary Dynamics.

Epstein, a former CFR and Trilateral Commission Member, also sat on the board of Harvard’s Mind, Brain, and Behavior Committee. He has furthermore been “actively involved in . . . the Theoretical Biology Initiative at the Institute for Advanced Study at Princeton, the Quantum Gravity Program at the University of Pennsylvania,” and the Santa Fe Institute, which “is a transdisciplinary research community that expands the boundaries of scientific understanding . . . to discover, comprehend, and communicate the common fundamental principles in complex physical, computational, biological, and social systems.”

Transhumanists believe that technologically “upgrading” humankind into a singularity will bring about a utopia in which “poor health, the ravages of old age and even death itself will all be things of the past.” In fact, eminent transhumanist Ray Kurzweil, chief of engineering at Google, believes that he will become “godlike” as a result of the singularity.

But the truth is that transhumanism is merely a more high-tech revision of eugenics conceptualized by eugenicist and UNESCO Director-General Julian Huxley. And when corporate philanthropists like pedophile Epstein—as well as Bill Gates, Mark Zuckerberg, Peter Thiel, and Google executives such as Eric Schmidt and Larry Page—are the major bankrollers behind these transhumanism projects, the whole enterprise seems ominously reminiscent of the corporate-philanthropic funding of American and Nazi eugenics.

In America, Charles Davenport’s eugenics research at Cold Spring Harbor was bankrolled by elite financiers, such as the Harriman family, as well as robber barons and their nonprofit foundations such as the Rockefeller Foundation and the Carnegie Institute of Washington. Davenport collaborated with Nazi eugenicists who were likewise funded by the Rockefeller Foundation. In the end, these Rockefeller-funded eugenics programs contributed to the forced sterilization of over 60,000 Americans and the macabre human experimentation and genocide of the Nazi concentration camps. (This sinister collusion is thoroughly documented in War Against the Weak by award-winning investigative journalist Edwin Black).

If history has shown us that these are the sordid bioethics that result from corporate-funded biosocial science, shouldn’t we be weary of the transhumanism projects of neo-robber barons like Epstein, Gates, Zuckerberg, Thiel, and the Google gang?

It should be noted that Epstein once sat on the board of Rockefeller University. At the same time, the Rockefeller Foundation—which has continued to finance Cold Spring Harbor programs as recently as 2010—also funds the Santa Fe Institute and the New York Academy of Sciences, both of which Epstein has been actively involved in.

And in 2013, the Rockefeller Foundation funded a transhumanistic white paper titled “Dreaming the Future of Health for the Next 100 Years,” which explores “[r]e-engineering of humans into separate and unequal forms through genetic engineering or mixed human-robots.”

So, considering that transhumanism—the outgrowth of eugenics—is being steered not only by twenty-first-century robber barons, but by corporatist monopoly men who are connected to the very transhumanist Rockefeller Foundation which funded Nazi eugenics, I suspect that transhumanist technology will not “upgrade” the common person. Rather, it will only be disseminated to the public in such a way—as Stanford University Professor Paul Saffo predicts—that converts social class hierarchies into bio(techno)logical hierarchies by artificially evolving the One Percent into a species separate from the “unfit” working poor, which will be downgraded as a slave class.

In his 1932 eugenic-engineering dystopia, Brave New World, Aldous Huxley (Julian’s brother) depicts how biotechnology, drugs, and psychological conditioning would in the future be used to establish a Scientific Caste System ruled by a global scientific dictatorship. But Huxley was not warning us with his novel. As historian Joanne Woiak demonstrates in her journal article entitled “Designing a Brave New World: Eugenics, Politics, and Fiction,” Aldous’ “brave new world can . . . be understood as a serious design for social reform” (105). In a 1932 essay, titled “Science and Civilization,” Huxley promoted his eugenic caste system: “in a scientific civilization society must be organized on a caste basis. The rulers and their advisory experts will be a kind of Brahmins controlling, in virtue of a special and mysterious knowledge, vast hordes of the intellectual equivalents of Sudras and Untouchables” (153-154).

With the aforementioned digital robber barons driving the burgeoning age of transhumanist neo-eugenics, I fear that Huxley’s Scientific Caste System may become a reality. And with Epstein behind the wheel, the new GMO Sudras will likely consist of not only unskilled labor slaves, but also child sex slaves who—like the preadolescents in Brave New World—will be brainwashed with “Elementary Sex” Education, which will inculcate them with a smash monogamy sexuality that will serve the elite “World Controllers.”

Jeffrey Epstein wanted to seed the population with his DNA in an effort to expand his hold over humanity.