Just like the Scarecrow in Fantasy Land Wizard of OZ, Fauci is confused about which way to go, left or right! He may just start seeing a Giant White Rabbit after the vaccine, IF IN FACT it was a real one and not a fake placebo, or a special non-harming concoction that is made special for the Luciferian’s!

By Geoffrey Grider| NTEB – It begs the question that if these vaccine are the ‘only way to stop the pandemic’ why pretend to get one? If they are so ‘safe’, why the dog-and-pony show? I think you know the answer to that one.

As all the various celebrities and politicians parade themselves on live television, making such a huge show about getting vaccinated with the “safe and reliable” vaccines from Pfizer and Moderna, the slip-ups in this COVID Theater are beginning to mount.

Such is the case of Anthony Fauci, who forget which arm he was injected in, and makes the fatal error on live TV.

Jeremiah 5:30-31 “A wonderful and horrible thing is committed in the land; The prophets prophesy falsely, and the priests bear rule by their means; and my people love to have it so: and what will ye do in the end thereof?”

In the video clip below from CBS News, we see phony Anthony Fauci appearing to be vaccinated in his left arm, but when being interviewed about it a short time later he points to his right arm as the place where he is experiencing “injection site soreness”.

Hmm, if his arm was so sore, you would think he would naturally point to the proper arm, but somehow he does not.

All criminals are liars, and when you tell lies it is hard to remember which ones are which. This is exactly what we see on display here.

So that begs the question that if these vaccines are the ‘only way to stop the pandemic’ why pretend to get one? If they are so ‘safe’, why the dog-and-pony show? I think you know the answer to that one.

We watched vice president Mike Pence pretend to be vaccinated in a shot that didn’t even appear to break the skin, we watch Benjamin Netanyahu pretend to get the COVID vaccine, but by a ‘doctor’ who forgot to wear gloves, who held the tip in the needle in his ungloved fingers, and used a diabetic syringe to boot!

Phony Anthony Fauci has been a card-carrying member of the New World Order with George Soros and the Rockefellers for decades, as well as having a leadership role in Bill Gates ‘Global Vaccine Action Plan’ dating back to 2010.

Phony Anthony Fauci is doing his part to deceive and trick you into getting the Messenger 33 vaccine. The only question is, will you fall for it? I can show you the truth, but I can’t make you see it. That part is up to you.

This 16-second clip will show you everything you need to know about how fake and phony the televised ‘vaccinations’ truly are.

Watch as Anthony Fauci appears to be vaccinated in his left arm, but when talking about “injection site soreness” later on, taps his right am as the place where he was vaccinated. Awake yet? 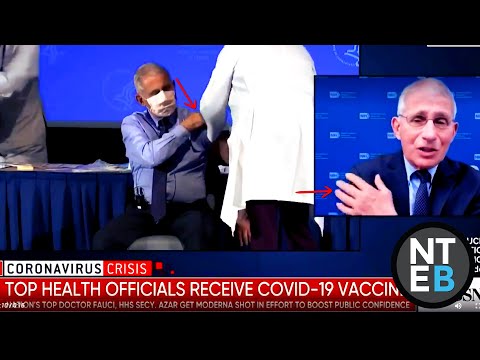