Michael Snyder – There comes a time when it becomes necessary to draw a line in the sand.

When the early settlers came to America, they were desperate to find a place where they could live in freedom.  And our Founding Fathers worked very hard to draft a Constitution that would guarantee that future generations of Americans would live in a nation where the freedom and liberty of the people were maximized.  Unfortunately, the way of life that our founders sought to establish is slowly being killed off by the progressive agenda of “the Liberal World Order”.  Just about every single element of their progressive agenda is diametrically opposed to the values and the principles that this country was founded upon.  And if they ultimately get everything that they want, our way of life will be eradicated for good. 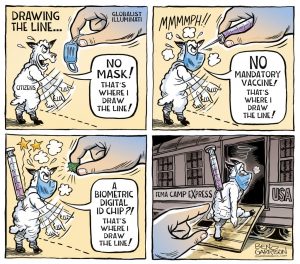 The term “Liberal World Order” is a phrase that is starting to be used quite frequently by the establishment.  It was used by the Washington Post to describe Barack Obama’s final speech to the United Nations, and Vice-President Joe Biden used it during his speech at the World Economic Forum in January.

But of course it is a term that doesn’t just apply to Democrats.  Many establishment Republicans also believe in the progressive agenda of the Liberal World Order, and that is why before Trump was elected nothing ever seemed to change very much in Washington no matter who was in power.

Sadly, the same thing is true all over the western world.  The Liberal World Order dominates most of the major political parties in just about every industrialized nation, and they are very much accustomed to getting their way.  That is one of the reasons why they hate Donald Trump with such a passion, because he is someone that they cannot fully control.

At this point, the Liberal World Order has almost complete control of our culture.  In addition to dominating the political system, they also have a stranglehold on the media, on the entertainment world, on most large corporations, on our system of public education, and even on many of our largest religious institutions.

In the end, their goal is not to just win elections.  I recently wrote that liberals hate “anyone that disagrees with them”, and even though they claim to be “tolerant” the truth is that they are some of the most intolerant people on the face of the planet.  When Kathy Griffin held up a bloody mock ‘decapitated’ head of Donald Trump, it really was a picture of what they want to do to our entire way of life.  They literally want to eradicate our worldview, and laws are slowly being put in place all over the western world that are moving us in that direction.

For the true believers in the Liberal World Order, government is a weapon to be used to achieve societal dominance.  That is why so many of them are drawn to law school.  I have often referred to law school as “seminary for liberals”, because that is essentially what it is.

Our legal system is absolutely infested with radical leftists from the top to the bottom, and that makes it a perfect tool for the left to advance their agenda.  Whether it is abortion, gay marriage or any other issue, the left often finds that the easiest way to achieve their goals is by going through the court system.

But every time government gets bigger, we lose more freedom and liberty.

Every law restricts freedom and liberty in some way.  Of course in some cases this is a very good thing.  For example, we don’t want the freedom to go around randomly murdering one another.  But we certainly do not need millions of laws.

We are supposed to be “the land of the free”, but most Americans seem to have forgotten what that really means.  If people want the government to tell them what to do every moment of every day, they can move to Europe.  Our founders guaranteed us a nation where liberty and freedom would be maximized, and the Liberal World Order has stolen this from us.

And of course having an enormous government is very expensive, and so we get to pay very heavily for the privilege of being oppressed.  I talk a lot about the income tax because that is one of my pet peeves, but that is only one of the taxes they hit us with.  In a previous article I listed 97 different taxes that Americans pay each year, and when everything is all said and done there are some Americans that end up handing over more than half of what they earn to various governmental entities.

But our leaders don’t use the term “socialism” to describe what is being done to us, because the American people aren’t ready to accept that reality quite yet.

Unfortunately, the control freaks that dominate our government always want more.  Our progressive politicians always seem to have another new tax up their sleeves, and earlier this year top Democrats in Congress proposed yet another payroll tax that would be taken directly out of our paychecks…

The Democrats plan, reintroduced in February by Sen. Kirsten Gillibrand (D, N.Y.) and Rep. Rosa DeLauro (D, Colo.), is The FAMILY Act, which would create a national fund to provide workers with two thirds of their income for up to 12 weeks, no matter where they live or work. The Democrats’ proposal would be funded by employee and employer payroll contributions, averaging less than $1.50 per week for a typical worker.

One of the primary reasons why my wife and I originally moved up to north Idaho was because we wanted to find a place where we could live free without someone constantly telling us what to do.  But we have come to realize that eventually the Liberal World Order is just going to take over everything if we don’t fight back.  If the America that so many in previous generations fought and died to defend is going to survive, we must take action now.

So I am calling on every man, woman and child that can hear me to engage in a new American revolution.  This isn’t a revolution with guns and bullets, but rather a non-violent cultural revolution that will be fought with votes, pens and keyboards.

We need to clearly communicate a vision for the future of America that is based upon the values and the principles that this nation was founded upon.  Those values and principles once made us the greatest nation on the entire planet, and they can do it again.

We also need to wrestle as much political power away from the Liberal World Order as we possibly can.  That means contesting Democrats and establishment Republicans on the federal, state and local levels.  Even capturing a seat on your local school board can make a tremendous difference, and so I am encouraging as many people as possible to become politically active.

If we do not take a stand now, eventually there won’t be anywhere left for freedom-loving Americans and their families to go.

Just like with the original American revolution, there are no guarantees that we will win.  At the time, very few could have imagined that the great British empire could have been defeated by a ragtag group of rebels, but it happened.  And the Liberal World Order is most definitely a formidable foe, and it will not be taken down easily.

All that it takes for evil to triumph is for good men and women to do nothing.

So let us be strong and courageous, and let us rise up and fight for the future of our nation.