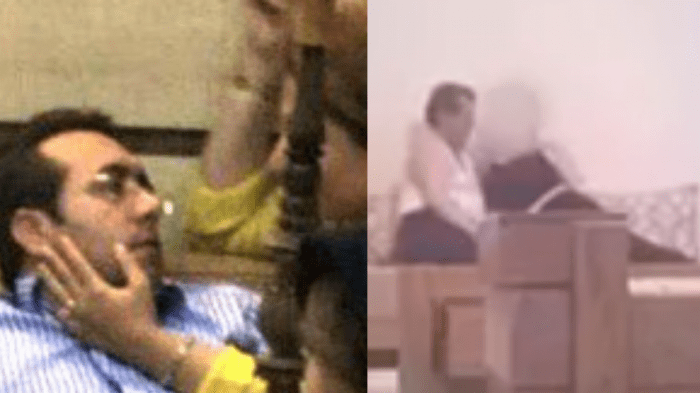 Yahoo News – In Iran, everyone is talking about the sextapes of two Iranian politicians that were leaked on social media in early August. This is the first time that such compromising videos of politicians have been leaked since the 1979 Islamic Revolution. For many Iranians, these videos highlight the hypocrisy of those who fervently defend Islamic morality.

The first sextape was posted online on August 4. The four-minute video, which was clearly filmed with a hidden camera, shows Ali Mohammad Ahmadi — the former governor of Kohgiluyeh and Boyer-Ahmad, a province in southwestern Iran — having sexual relations with a woman.

FRANCE 24 blurred this screengrab from the four-minute video that shows politician Ali Mohammad Ahmadi caught in the act.

Local media outlets, said to have close ties to Ahmadi, alleged that the politician had been set up by a foreign intelligence agency who tried to force him to travel to Canada and take part in a television program critical of the Iranian government.

These same media outlets claimed that Ahmadi refused and that the video was leaked as a result. A close associate of Ahmadi’s swore that the woman in the video was his “legitimate wife under Islamic law”. In reality, however, Ahmadi has been married to the same woman for years… and she is definitely not the woman who appears in the sextape.

On August 6, a second video of Ahmadi with the same woman was posted online. In the eight-minute video, the pair spend most of the time talking and kissing.

Ahmadi has been described as a centrist and a reformist and has close ties to the government of President Hassan Rouhani. Ahmadi recently resigned from his position as governor to start campaigning for the February 2020 legislative elections.

Second politician gets caught in the act

On August 9, another leaked sextape popped up on social media, this time featuring a different Iranian politician — Abbas Malekzadeh, the mayor of Sadra, a town of about 100,000 residents in the southern province of Fars.
A few days earlier, on August 5, he had been arrested with three people from the city council, all accused of corruption.

Unlike the videos of Ahmadi, which looked like they were filmed with a hidden camera, Malekzadeh filmed this video himself. In the video, he stands there naked, caressing the naked woman with him as she talks on the telephone.

In the days following the leak, the woman in the video posted two videos begging social media users to erase the sextape. She says it was filmed three years ago and could “ruin [her] life” as she is now married.

This screengrab was taken of the sextape featuring Malekzadeh. It was blurred by France 24.

Other photos of Malekzadeh have recently appeared online. In these images, he is seen smoking hookah with a woman named Zahra Jamali, one of his assistants at the city council, whowas arrested with Malekzadeh on August 5. In one of the photos, Jamali seems to be touching his cheek, a gesture between a man and a woman that’s forbidden by Islamic law, unless they are related.

Lili (not her real name) is an Iranian journalist who writes about society. She spoke to the FRANCE 24 Observers about how Iranians have reacted to these sextapes.

We already knew that lots of Iranian officials were living double lives — that’s not really a secret — but these videos are proof.

People see these videos as just more proof of government officials’ hypocrisy. These men have the right to have sexual relations, of course, and most people don’t really care who they do it with… but the men in question are officials of the Islamic Republic, a country with a morality police that arrests people for dating out of wedlock.

About a decade ago, a sextape featuring an actress on a popular TV series was leaked. It ruined her life. She was arrested, then eventually left Iran and moved to France. Because the men in the videos are politicians, they likely won’t face any legal repercussions for their actions. This hypocrisy is what makes people so angry, not their sex lives.

In 2007, the Iranian attorney general announced that Reza Zarei, the chief of police in Tehran, had been arrested in a brothel with six women. He spent four months in prison before being downgraded and then given early retirement.

Another scandal took place in 2003 when the mistress of Ata’ollah Mohajerani, a former Minister of Culture close to President Mohammad Khatami, said that she wanted to be recognised officially as his wife, which he allegedly refused (polygamy is allowed under Iranian law but it is a societal taboo). In the wake of the scandal, Mohajerani ended up resigning and then moved to the United Kingdom in 2004.

A precedent dating back to the Shah’s time

Before 1979, another famous sextape was released in the late 1960s under the Shah. SAVAK,  the Iranian intelligence agency at the time, ensnared several religious figures opposed to the Shah by getting a woman to lure them into a bedroom. The SAVAK agents then filmed the encounter.