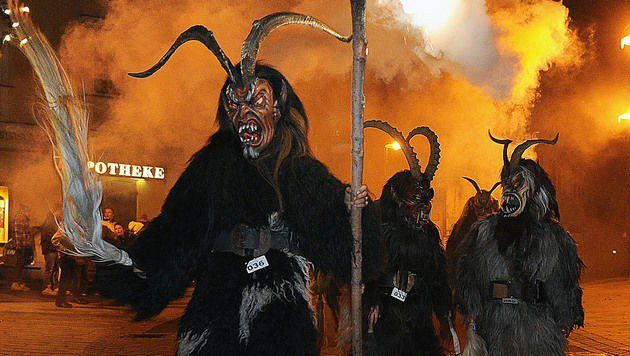 Breitbart News – A teenager from an Albanian background was arrested after attacking another teen dressed as Saint Nicholas’s demonic counterpart “Krampus” during a festive parade in Switzerland.

The attack took place at a Saint Nicholas parade in the Swiss municipality of Rickenbach in the district of Winterthur on Saturday and saw the Albanian-background teen (Muslim) attack a 17-year-old Swiss who was dressed as “Schmutzli”, the Swiss name for the demon Krampus, Austrian tabloid Kronen Zeitung reports.

The Swiss teen was slashed in the back with a folding knife and was taken to a local hospital where he required several stitches. The victim told local media: “I do not want to make a big story out of it and love to forget it as fast as possible.”

He went on to add that he did not provoke the Albanian-background youth (Muslim) and said the ordeal left him frightened because the attack had come out of nowhere. Police arrested the attacker but released him the next day. Read More at Breitbart News

Why don’t these people call these criminals what they are… Muslim Terrorists!

What in the world is a Krampus?

Krampus is the dark companion (an ELF) of St. Nicholas, (note they say “dark companion” of Santa) the traditional European winter gift-bringer who rewards good children each year on December 6. The kindly old Saint leaves the task of punishing bad children to a hell-bound counterpart known by many names across the continent — Knecht Ruprecht, Certa, Perchten, Black Peter, Schmutzli, Pelznickel, Klaubauf, and Krampus. Usually seen as a classic devil with horns, cloven hooves and monstrous tongue, but can also be spotted as a sinister gentleman dressed in black, or a hairy man-beast. Krampus punishes the naughty children, swatting them with switches and rusty chains before dragging them, in baskets, to a fiery place below. Source.

Santa’s Elves are not what they appear to be. What exactly are they in reality?

An elf (plural: elves) is a type of supernatural being in Germanic mythology and folklore. Reconstructing the early concept of an elf depends almost entirely on texts in Old English or relating to Norse mythology. Later evidence for elves appears in diverse sources such as medical texts, prayers, ballads, and folktales. Recent scholars have emphasized, in the words of Ármann Jakobsson, that the time has come to resist reviewing information about álfar en masse and trying to impose generalizations on a tradition of a thousand years. Legends of álfar may have been constantly changing and were perhaps always heterogeneous so it might be argued that any particular source will only reflect the state of affairs at one given time.
However, some generalizations are possible. In medieval Germanic-speaking cultures, elves seem generally to have been thought of as a group of beings with magical powers and supernatural beauty, ambivalent towards everyday people and capable of either helping or hindering them. However, the precise character of beliefs in elves across the Germanic-speaking world has varied considerably across time, space, and different cultures. In Old Norse mythological texts, elves seem at least at times to be counted among the pagan gods; in medieval German texts they seem more consistently monstrous and harmful.

Elves are prominently associated with sexual threats, seducing people and causing them harm. For example, a number of early modern ballads in the British Isles and Scandinavia, originating in the medieval period, describe human encounters with elves.
In English literature of the Elizabethan era, elves became conflated with the fairies of Romance culture, so that the two terms began to be used interchangeably. German Romanticist writers were influenced by this notion of the ‘elf’, and re-imported the English word elf in that context into the German language. In Scandinavia, probably through a process of euphemism, elves often came to be known as (or were conflated with) the beings called the huldra or huldufólk. Meanwhile, German folklore has tended to see the conflation of elves with dwarfs.

The “Christmas elves” of contemporary popular culture are of relatively recent tradition, popularized during the late nineteenth-century in the United States. Elves entered the twentieth-century high fantasy genre in the wake of works published by authors such as J. R. R. Tolkien, for which, see Elf (Middle-earth). Source

Go read all of Christmas: Is it Christian or Pagan? – Part 7 for more information