Same thing those Muslim Bastards (Hebrews 12:8) were doing on 911. Filming and celebrating!

Daily Wire – Multiples reports surfaced Friday night stating that six Saudi nationals have been detained for questioning near the Naval Air Station (NAS) in Pensacola, Florida, some who allegedly filmed an alleged member of Saudi military who went on shooting spree at the base earlier in the day. 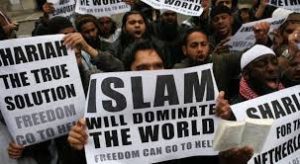 “Six other Saudi nationals were detained for questioning near the scene of the shooting, including three who were seen filming the entire incident, according to a person briefed on the initial stages of the investigation,” The New York Times reported.

Fox News reported that, according to a senior U.S. official, “the suspects were taken into custody and are being questioned about the shooting.”

The attacker killed three other people and wounded several others, including two police officers, in what authorities are investigating as a potential act of terrorism. The attacker was killed at the scene.

“The Pentagon told CBS News that the shooter had been in the country since August 2017 pursuant to a U.S. Air Force Foreign Military Sales training case funded by the Kingdom of Saudi Arabia and that he was scheduled to stay until August 2020,” CBS News reported. “He was enrolled in English, basic aviation, and initial pilot training at the station, the Pentagon added.”

Rep. Matt Gaetz (R-FL) said on Friday that the alleged attacker did not commit murder, but an act of terrorism.

“Major news organizations are now reporting the information that we began to learn earlier this morning that it was a Saudi Arabian military official in Pensacola, in our community for training, who committed these murderous acts and this terrible, terrible violence at NAS Pensacola,” Gaetz said. “I think it’s important for us to know a little bit about why Saudi Arabian officials are in our community.”

“This event represents a serious failure in the vetting process and in the way in which we invite these people into our community,” Gaetz continued. “So today, as we learn more as the investigation continues to unfold … I’m going to be very active in working with the Department of Defense and the Department of State to ensure that we have extreme vetting for the people that come into our country on our bases and in our communities.”

This was not a murder. This was an act of terrorism. pic.twitter.com/AJfTQOOE68