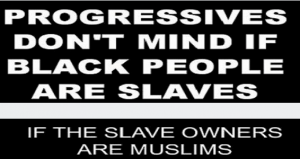 Bare Naked Islam – Islam and the prophet Muhammad not only have a sordid history of enslavement, beginning in the 7th Century, but also a historical record of systemic racism towards Black people. We need not quote any ‘anecdotal’ examples, we need only look to historical records of the Arab slave trade and widely accepted Islamic scriptures that endorse slavery.

Unofficially, around 11.5 to 14 million black slaves are being held by Muslim masters as part of a religious right given to those who pledge allegiance to Islam.

Nowhere on earth today can you ‘buy’ a Black person to be a slave…except in the Arab Muslim world.

The immense scale of the horror inflicted on black Africans by Arab Muslim invaders over 1400 years is stunning. And make no mistake, enslaving Black people is still continuing today in that world. Muslim scholars have been allowed to teach their own version of history to the non-Muslim World, which means the truth gets buried in political correctness. The Muslim trade slave trade began centuries before Western slavery and has carried on after long after Western slavery ended.

Black slaves were castrated by Muslims as they were believed to have uncontrollable sexual appetites. While most slaves bound for the Americas were brought for agricultural purposes, slaves bound for Arab countries were used for sex and the military. Twice as many women as men were enslaved by Muslims. But most of the children born to these women were killed. The death toll from 1400 years of the Arab slave trade is estimated to be between 112 and 140 million.

Fontpage Mag reports that many black slaves are abducted from Africa today. The difference is that Islamic countries have never warred over the moral standing that slavery violates the most basic human rights. 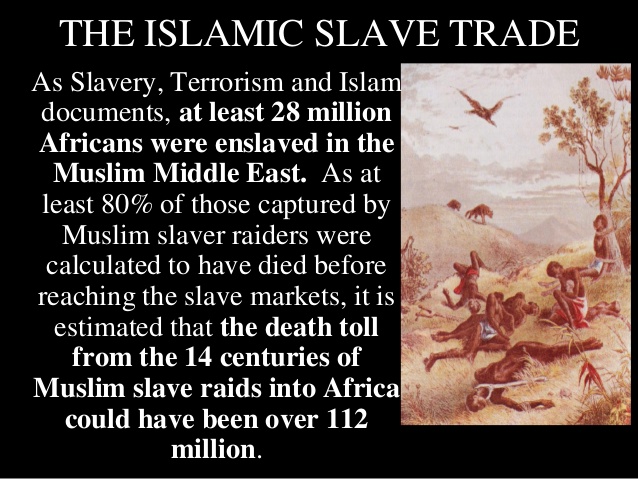 Slavery is an extremely profitable business for Muslims. Whether for sex or labor, slaves are often sold as soon as they hit puberty. Young girls are inspected for beauty, health, and other physical attributes that might contribute well to child-bearing. Young men are deemed fit for physical labor or other chores.

Much of North Africa is enslaved by Arab masters, but even those who are free still suffer racial apartheid. Although some Muslim countries have officially outlawed slavery, it is still rampant because Muslim authorities turn a blind eye to it.

While America still attempts to apologize and make reparations for decisions made by former generations that no longer exist, millions of Muslims are enslaving blacks as we speak.