Domestic Terrorist? Pro-CRT Parent Threatens School Board, “I Have 1,000 Soldiers Ready To Go, Locked And Loaded”

Kelen McBreen | Info Wars – Parents in Fort Worth, Texas say they felt threatened after a man defending the teaching of Critical Race Theory during a school board meeting claimed to have one thousand “soldiers” armed and ready for a fight.

The individual who made the remark, allegedly a former black militia member, told parents attending a Fort Worth Independent School District board meeting, “I got over a thousand soldiers ready to go.”

“For those who got an issue with this critical race theory equity, this is something I fight for, for my children,” he said. “How dare you come out here and talk about the things that my daddy and my grandparents went through, the lynching, the oppression, Jim Crow, and my kids are still being afflicted by this.”

The upset father told other parents his “First Amendment rights” allowed him to make such threats before adding, “I’m gonna bring my soldiers with me next time. Locked and loaded.”

A Far-Left activist in an FWISD Board meeting threatened parents all because they were criticizing CRT. The activist said that he would bring 1000 soldiers and that he will be "lock and loaded" next time. pic.twitter.com/VmqNaQQh10 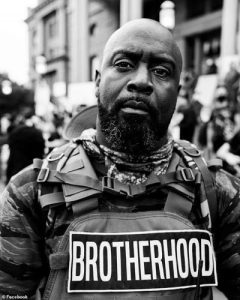 The pro-CRT parent, named Malikk Austin, has some people in the community worried he’ll follow through with the warning.

“Absolutely, it made me feel threatened,” a mother who attended the meeting told Fox News on Sunday. “I’m scared and I’m afraid he’s going to do something.”

A grandmother who was in attendance said, “Everyone there felt threatened,” and claimed Austin previously spoke at a school board meeting while wearing “tactical gear.”

“I was thinking about calling my husband and having him come to the parking lot because I was afraid to come to my car,” she told Fox News.

A video from an August FWISD board meeting shows Austin wearing a bulletproof vest and telling the board, “I’m a revolutionary!”

The liberal parent’s public threats come after the Biden administration revealed the FBI will be investigating parents who oppose CRT or mask mandates as potential “domestic terrorists.”

“Merrick Garland mobilized the FBI to intimidate parents without legal basis and, we now know, premised on misinformation he didn’t bother to verify,” Senator Josh Hawley (R-MO) tweeted after a DOJ memo on the subject made headlines.

So, conservative parents are being targeted by the federal government for speaking out at school board meetings as lunatic liberals are allowed to say they’re going to come to the next meeting with a thousand rifle-carrying militants.

No wonder parents across the nation are politically fighting back against CRT by winning school board elections across the country last month.

See the full November 9 FWISD school board meeting below:

Alex Jones predicted anti-vaxxers and patriots would be labelled ‘domestic terrorists’ long before the recent DHS claims that COVID restrictions and the arrival of Afghans could fuel domestic terrorism.