“We shall have world government whether or not you like it, by conquest or consent.” – Statement by Council on Foreign Relations (CFR) member James Warburg to The Senate Foreign Relations Committee on February 17th, 1950 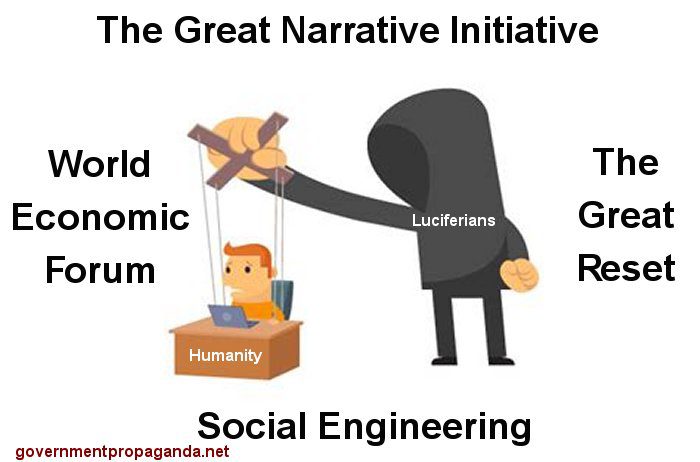 This is really nothing new (Ecclesiastes 1:9-11) as the Bastard Luciferians (Hebrews 12:8) have been manipulating humanity for centuries! They have accelerated their agenda recently. They know their time is short and are going to gaslight as many as possible right to the pit of Hell with them!

Social engineering initiative will serve as a blueprint for governments to accelerate their propaganda and target news organizations and journalists who defy their official narratives.

“We are here to develop the Great Narrative, a story for the future,” said Schwab on Thursday, joined by United Arab Emirates Minister of Cabinet Affairs Mohammad Abdullah Al-Gergawi.

“Here, I think the next two days, we will look [to] how we imagine, how we design, how we execute the great narrative, how we define the story of our world for the future,” he added.

Schwab blamed “self-centered” people and the “complexity of the world” for the globalists’ inability to completely control mankind’s future.

“People have become much more self-centered, and to a certain extent, egoistic. In such a situation it is much more difficult to create a compromise because shaping the future, designing the future usually needs a common will of the people,” he told the audience.

“The world has become so complex. Simple solutions to complex problems do not suffice anymore.”

“You have today, not anymore separation between social, political, technological, ecological — it’s all interwoven,” he added.

Describing the WEF’s history, Scwhab also claimed the organization’s “fourth industrial revolution” will “benefit” humanity, referring to his Great Reset initiative to deindustrialize the West in the name of fighting climate change.

“We felt it’s very important that we really work together on a global level to make sure that we use the potential of the fourth industrial revolution for the benefit of mankind because technology also has certain pitfalls and can be used to the detriment of humankind,” he said.

“I think what we are doing here is very important because you can cooperate if you define the common interests which we have, and if we show all the politicians that at the end, sometimes to make short-term compromises is in the long-term interest of every party involved.”

The Great Narrative meeting is a linchpin of the Great Narrative initiative, a collaborative effort of the world’s leading thinkers to fashion longer-term perspectives and co-create a narrative that can help guide the creation of a more resilient, inclusive and sustainable vision for our collective future.

Top thinkers from a variety of geographies and disciplines – including futurists, scientists and philosophers – will contribute fresh ideas for the future. Their reflections will be shared in a forthcoming book, The Great Narrative, expected for publication in January 2022.

Of course, any kind of information that counters the so-called Great Narrative will be targeted as disinformation and censored or worse.

This is just a continuation of the Great Reset agenda and a signal that the globalists are taking the information war against humanity to the next level.

Oceania has always been at war with Eastasia.