I WILL NOT BOW TO BAAL!! or any of their other false gods! 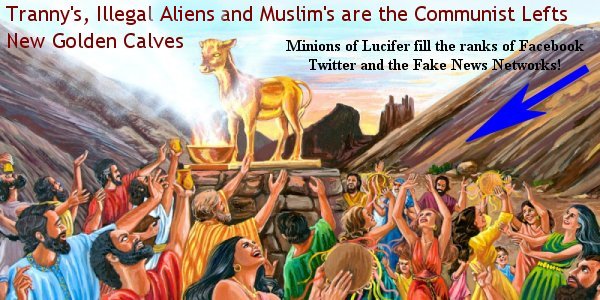 Bottom line first and you will see the meaning of this as you read on:

What do we do Folks? Sit back and let the Tech Giants Steal our Freedom of Speech, our Peas if you will, or do we go to battle with them IN THE NAME OF JESUS and win the Victory?

Many Conservatives and Christians are being Symbolically Slaughtered and offered to Baal on the Social Media Altar under the guise of Hate Speech and Bullying!

I have been banned, this time for 30 days on Fascist Book! Why? I posted an article to my Government Propaganda page and commented on it! I dared touch the Golden Calf and told the Truth.

3 strikes your out: 1.she is a Dirty lying Muslim, 2. she is a Communist Democrat, 3. she is a Bigamist and commits Incest with her brother!

It is EXACTLY the Same Way I posted it on Twitter:

Hate Speech according to Fascist Book:

a direct attack on people based on what we call protected characteristics — race, ethnicity, national origin, religious affiliation, sexual orientation, caste, sex, gender, gender identity, and serious disease or disability. We also provide some protections for immigration status. We define attack as violent or dehumanizing speech, statements of inferiority, or calls for exclusion or segregation.

EPIC QUESTION: If Islam is so wonderful, why do millions of Muslims keep fleeing to Christian countries in the west?

If these Muslims are allowed to incrementally take over seats in government, then Sharia law won’t be far behind! There are 90 Muslims currently running for office across America!

It is the goal of the Tech Giants, Communists, Socialist Leftist dogs to muzzle us in the lead up to the November elections, and get their minions in power.

Baal worshipers have their dirty fingers in the ban button! It has hit a fever pitch since I began gathering the info for this article.

What is MY, and others great Sin?

Who are the Devils behind the Curtain?

Looks like CAIR may be behind the banning of people on Fascist Book who speak the truth about Islam and Muslims! This group was labeled a Terrorist Organization yet they still recruit, operate, and have major influence inside of American Government!

These people who make up these Muslim organizations could very well be descendants of the Philistines!

Who are the Philistines?

The Philistines were an aggressive, warmongering people who occupied territory southwest of Israel between the Mediterranean Sea and the Jordan River. The name “Philistine” comes from the Hebrew word Philistia, and the Greek rendering of the name, palaistinei, gives us the modern name “Palestine.” The Philistines are first recorded in Scripture in the Table of Nations, a list of the patriarchal founders of seventy nations descended from Noah (Genesis 10:14). It is thought that the Philistines originated in Caphtor, the Hebrew name for the island of Crete and the whole Aegean region (Amos 9:7; Jeremiah 47:4). For unknown reasons, they migrated from that region to the Mediterranean coast near Gaza. Because of their maritime history, the Philistines are often associated with the “Sea Peoples.” The Bible records that the Philistines had contact with both Abraham and Isaac as early as 2000 B.C. (Genesis 21:32, 34; 26:1, 8).

After Isaac’s involvement with the Philistines (Genesis 26:18), they are next mentioned in passing in the book of Exodus shortly after the Israelites crossed the Red Sea: “When Pharaoh let the people go, God did not lead them on the road through the Philistine country, though that was shorter. For God said, ‘If they face war, they might change their minds and return to Egypt’” (Exodus 13:17).

The “road through the Philistine country” refers to a route later known as the Via Maris or “the Way of the Sea,” one of three major trade routes in ancient Israel. This coastal road connected the Nile Delta with Canaan and Syria and beyond, into the Mesopotamian region of southwest Asia.

The Old Testament indicates that around the 13th century B.C., during the days of Samuel and Samson, the Philistines moved inland from the coast of Canaan. There, they built their civilization primarily in five cities: Gaza, Ashkelon, Ashdod, Gath, and Ekron (Joshua 13:3). These cities were each governed by a “king” or “lord” (from the Hebrew word seren, also rendered as “tyrant”). These kings apparently formed a coalition of equals. Each king retained autonomous control of his city, such as when Achish, king of Gath, dealt with David (1 Samuel 27:5-7), but they worked in concert in times of national emergency (Judges 16:5).

The Philistines were known for their innovative use of iron, which was superior to the bronze used by the Israelites for weapons and implements. Even as late as the time of Saul (1050 – 1010 B.C), the Israelites were forced to rely on the Philistines to sharpen or repair their iron tools (1 Samuel 13:19-21). With their more advanced armaments and aggressive military policy, the Philistines continually thwarted Israel’s development as a nation. For nearly 200 years, the Philistines harassed and oppressed the Israelites, often invading Israel’s territory. The children of Israel simply could not deal with the Philistines’ overwhelming military might. This only came to an end when Samuel and then David, through the guidance of God, were able to defeat the Philistines (1 Samuel 7:12-14; 2 Samuel 5:22-25).

The Old Testament indicates that the Philistines worshiped three gods: Ashtoreth, Dagon, and Baal-Zebub—each of which had shrines in various cities (Judges 16:23; 1 Samuel 31:10; 2 Kings 1:2). Archaeological findings show that Philistine soldiers carried images of their gods into battle (2 Samuel 5:21). Apparently, they were also a superstitious people who respected the power of Israel’s ark of the covenant (1 Samuel 5:1-12).

The Israelites frequently referred to the Philistines as “uncircumcised” (Judges 15:18; 1 Samuel 14:6; 2 Samuel 1:20), meaning, at that time, those who had no relationship with God. They were not God’s chosen people and were to be strictly avoided as a contaminating evil.

Today, the word philistine is used as an epithet to refer to an unrefined, dull person. In truth, the Philistines of history were not unsophisticated or uncultured. They were an advanced seafaring people who, for several generations, were years ahead of Israel.

With the exception of Jeremiah chapter 47, there are very few prophetic references to the Philistines. In the end, the Philistines were assimilated into Canaanite culture. They eventually disappeared from the biblical record and from history altogether, leaving behind the name “Palestine” as a testimony of their existence. Source: Got Questions

The TECH Giants, the Philistines are Still in the Land and are in the Pea Patch

2nd Samuel 23:11-12 “And after him was Shammah the son of Agee the Hararite. And the Philistines were gathered together into a troop, where was a piece of ground full of lentiles: and the people fled from the Philistines. 12 But he stood in the midst of the ground, and defended it, and slew the Philistines: and the LORD wrought a great victory.”

While looking for commentary on Shammah, I came across this post. Since it is pretty much the same thing I would write and really can’t say it any better, I offer it here to you reader:

The children of Israel were in battle with the Philistines very often in the Old Testament, especially during the lifetime of King David, but one of the most memorable victories for Israel was when a man named Shammah chose to defend his field of lentiles, or, better yet, his pea patch.

I have heard Pastor Rod Parsley say, “Peas don’t mean much unless they are your peas,” and, in this case, Shammah’s peas meant a whole lot to him. This was a source of his livelihood, and he could not afford for the Philistines to take it over. Yea, they were giants and much bigger than Shammah, but Shammah did not care. He was defending exactly what belonged to him, even if it cost his life. Not only did he defend his pea patch, but Shammah slew the Philistines, as the LORD brought about a great victory!

We must take a stand and go to war in prayer and authentic evangelism. It may be our homes, businesses, schools, community, etc., but that territory belongs to the people of God, and what we must do is defend our pea patch and pursue our enemies.

We cannot run away from the giants because of their size and strength. The truth of the matter is that the God we service is much bigger and stronger. Why should simply hand over our source of livelihood to the enemy because of fear? Why not fight the good fight of faith in knowing who God is over us? We must be as Shammah and defend our pea patch with the confidence that when we step up and stand out for God, He will do the same for us, bringing to us a tremendous victory! Source: Sky Watch Ministries

In this case, the “Pea Patch” is Freedom of Speech, Telling the Truth and Standing against EVIL! 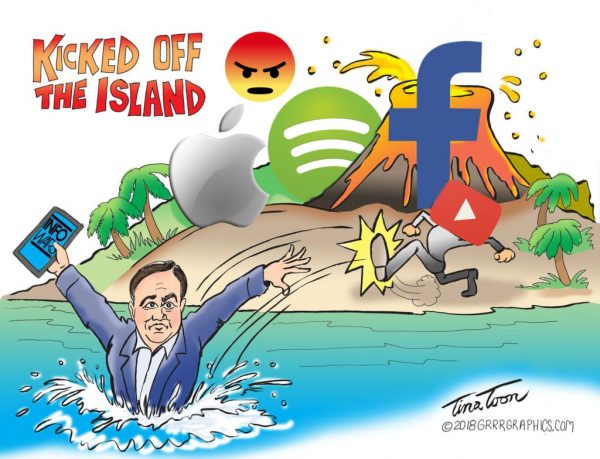 The Globalist far left Social Media corporations flexed their muscles and colluded together in order to kick a dissenting voice off their social media island.

This is chilling and a red alarm to those to value the freedom of speech and debate over issues that are so important to our lives.

Even if you do not agree with Alex Jones, you can speak out and support him in this battle of censorship against Group Think and Tyranny. See more 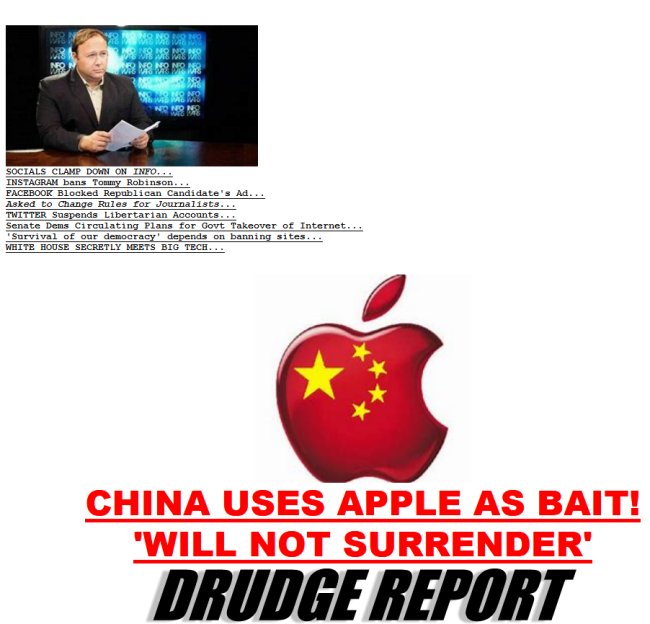 What do we do Folks? Sit back and let the Tech Giants Steal our Freedom of Speech, our Peas if you will, or do we go to battle with them IN THE NAME OF JESUS and win the Victory?