Pray for Joe. This has been their plan all along. Joe is a Catholic and will go to Hell if he dies before he accepts Jesus as his Lord and Savior! 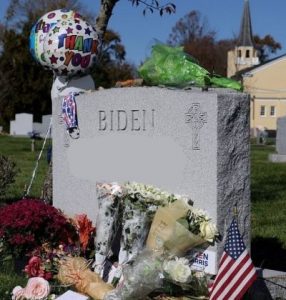 By PJ Media – The Left has, in an odd way, been transparent about their entire strategy during this election.

Among many other signals, Nancy Pelosi told us Trump would lead at the end of election night but would not win.

And now the ink was barely dry on the media anointings of Joe Biden as the president-elect when hints of the next phase began to appear: articles explaining what would or should happen if the president-elect died before the inauguration. Are Kamala and her backers that restless already?

The Los Angeles Times actually started the ball rolling several days before the election with an editorial raising questions about the health of the candidate who was vigorously traversing the country and holding several rallies a day, not about the condition of the doddering, cloudy, stumbling candidate who spent the campaign calling lids and napping in his basement (we know now that as he said, this was at least in part because he didn’t need our votes to get elected): “Trump’s COVID infection spotlighted a problem: What happens if a president-elect dies?”

Despite the article’s focus on Trump, it was clear that it had only been published because of Biden’s obvious and advancing dementia. Trump is president now, so the question of what would happen if the president-elect dies only becomes an issue if Biden’s media victory is confirmed.

Then on Saturday, Tim McDonnell, who is something called a “climate reporter” for Quartz, came out clearly with what this is all about. In an article entitled “What happens if a president-elect dies before inauguration?,” McDonnell wrote: “It may seem morbid, but given that Biden, at 77, will be the oldest president-elect in history and is running in the midst of a pandemic, it’s worth clarifying what would happen if he dies before taking office. If Joe Biden were to die before being sworn in as president, he would almost certainly be replaced by Kamala Harris.”

Quartz got some pushback for this, and later tweeted: “We deleted an earlier tweet of a story explaining what happens if the president-elect dies before taking office. We hoped to help those searching for the answer to this question. It was posted to our Twitter account in error.” It did not, however, take the article down.

Then on Sunday, journalist Emily France wrote another piece on this in as.com: “US Election 2020: what happens if a president-elect dies?” She suggested that Biden was vulnerable because of the coronavirus and those evil right-wingers: “It’s extremely unlikely to happen to Biden, but at 77 he’s also contending with a pandemic and a fiercely divided electorate, so nothing is impossible.” That “fiercely divided electorate” threatens Biden because, well, you know how violent conservatives are.

France goes on: “Now, it may seem a bit morbid given Biden has only just celebrated his win but, out of curiosity we’re going to explore what would happen if this worst case scenario did pan out.”

Yeah, “out of curiosity.” Emily France may have not put two and two together, or hopes that we haven’t, and that we don’t remember that just four weeks ago, Nancy Pelosi unveiled an elaborate proposal that would make it easier for Congress to use the 25th Amendment to remove a president it judged unable to discharge his duties. Pelosi emphasized: “This is not about President Donald Trump — he will face the judgment of the voters.”

Well, maybe, or maybe he’ll just face the judgment of the vote fixers. “But he shows,” Pelosi continued, “the need for us to create a process for future presidents.” Why, yes, of course! We need to take time in October of a presidential election year to craft a smooth and easy process for getting rid of presidents who are – in the judgment of Congress and the vice president – unable to act as president. A burning issue indeed — if Joe Biden were president. President Trump saw what was afoot immediately, tweeting on October 9: “Crazy Nancy Pelosi is looking at the 25th Amendment in order to replace Joe Biden with Kamala Harris. The Dems want that to happen fast because Sleepy Joe is out of it!!!”

Trump was right. Now that the media has decided that the election is over and a Democrat will be inaugurated as president on January 20, Quartz and the others are laying the groundwork for the possibility that the Democrat in question will be Kamala Harris rather than Old Joe. One thing the Democrats deserve credit for: they have been telegraphing their plans all along.

Alex Jones breaks down Joe Biden’s new task force plan and how he will try to force to President Trump to implement it.