Romans 1:26-32 “For this cause God gave them up unto vile affections: for even their women did change the natural use into that which is against nature: 27 And likewise also the men, leaving the natural use of the woman, burned in their lust one toward another; men with men working that which is unseemly, and receiving in themselves that recompence of their error which was meet. 28 And even as they did not like to retain God in their knowledge, God gave them over to a reprobate mind, to do those things which are not convenient; 29 Being filled with all unrighteousness, fornication, wickedness, covetousness, maliciousness; full of envy, murder, debate, deceit, malignity; whisperers, 30 Backbiters, haters of God, despiteful, proud, boasters, inventors of evil things, disobedient to parents, 31 Without understanding, covenantbreakers, without natural affection, implacable, unmerciful: 32 Who knowing the judgment of God, that they which commit such things are worthy of death, not only do the same, but have pleasure in them that do them.” 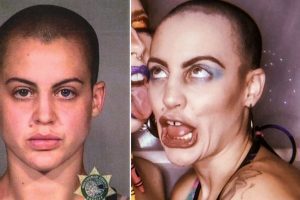 Portland police came under the usual assault by rioters’ using rocks, lasers, bottles, eggs and the usual battery of ballistics.

Rioters were told to disperse as they attempted to get at the Kelly Building which houses government offices and is a frequent target.

A news release by the Portland Police Bureau says that the rioters wouldn’t disperse and were warned “crowd control” would be used if they didn’t vamoose. They didn’t.

Another Antifa BLM Riot Is Declared

Officers stayed back a significant distance in the parking lot in an attempt to deescalate the situation.

Someone rolled a mock guillotine with a stuffed bear into the street (photo). The bear and multiple U.S. flags were burned. Paint balloons were launched at officers, as well as green lasers.

Officers initiated another push, attempting to convince the group to leave. This time, they went south on Southeast 47th Avenue to Southeast Stark Street. Officers disengaged again. Protesters lit traffic barricades, mattresses, a door, and other debris on fire in the intersection (photo courtesy @infopig).

Emergency calls were once again ignored while the children were throwing their nightly violent tantrum in Portland.

Between 45 and 50 officers had to be pulled from precincts to assist in the protest response. For most of the duration of this event, there were between 120 and 140 calls holding in the City of Portland. Calls included shots fired, assaults, alarms, threats, and suspicious circumstances.

Crowd control munitions were used during this event, however no CS gas was deployed.

Police say they arrested 14. Among them was Alice Elizabeth Johnson. The woman, who just celebrated her 28 birthday – Happy Birthday, Alice! – was charged with interfering with a Portland Police officer. She was let off on her own recognizance and required to post $0.00 bail. Zero. That’s a nice birthday present from the new DA.

At night, Alice appears to be an antifa warrior for the far Left. She leaves the comfort of home to take on imaginary fascists and racists. Fascists and racists are defined as people who don’t agree with her. For example, you’re a “fascist” and a “racist” if you support police officers.

She looks fierce with her shaved head and mean spirit.

Note: I say IT looks Deranged and Reprobate! 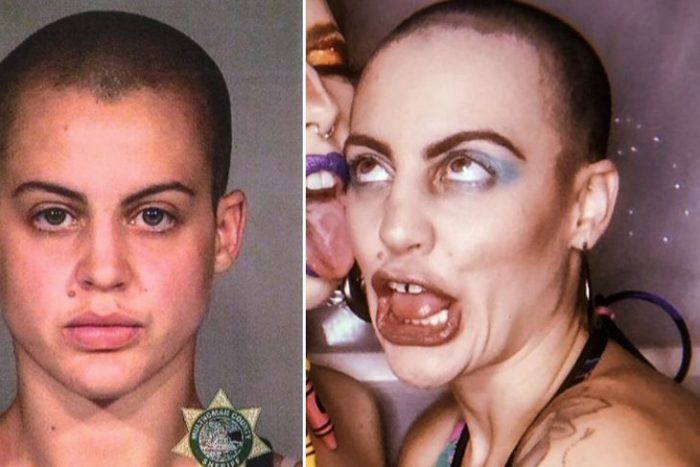 During the day Alice Johnson is a counselor, a “life skills coach” for New Avenues for Youth, one of the drop-in centers for drug addicts, homeless, and all manner of disaffected youth in downtown Portland. Coincidentally – and conveniently –  it sits just a few blocks away from antifa’s favorite riot staging area.

One can only imagine what kind of “counseling” Johnson must do with her young charges at the center.

Alice also has another side-hustle. When she’s not rioting and acting as a life coach for street youth, she also doubles as a “devil” under her stage name “Alice Phallus” at the popular downtown club “Dante’s Inferno,” a live music club which features a “F*ck Off Facists” sign on the side of the building. The kids must dig it.

Her Instagram page advertises, “Catch my devil act tonight at Sinferno! Still plenty of time to get here 😈 mention my stage name at the door and you get in for free!”