Those are the same jihadi brides that the establishment media is agitating about, demanding that they be allowed to return to the US and the UK.

The seizure of Infidel girls and their use as sex slaves is sanctioned in the Qur’an. According to Islamic law, Muslim men can take “captives of the right hand” (Qur’an 4:3, 4:24, 33:50). The Qur’an says: “O Prophet! Lo! We have made lawful unto thee thy wives unto whom thou hast paid their dowries, and those whom thy right hand possesseth of those whom Allah hath given thee as spoils of war” (33:50). 4:3 and 4:24 extend this privilege to Muslim men in general. The Qur’an says that a man may have sex with his wives and with these slave girls: “The believers must (eventually) win through, those who humble themselves in their prayers; who avoid vain talk; who are active in deeds of charity; who abstain from sex, except with those joined to them in the marriage bond, or (the captives) whom their right hands possess, for (in their case) they are free from blame.” (Qur’an 23:1-6)

The rape of captive women is also sanctioned in Islamic tradition:

It is also in Islamic law: “When a child or a woman is taken captive, they become slaves by the fact of capture, and the woman’s previous marriage is immediately annulled.” (Umdat al-Salik O9.13)

The Egyptian Sheikh Abu-Ishaq al-Huwayni declared in May 2011 that “we are in the era of jihad,” and that meant Muslims would take slaves. In a subsequent interview he elaborated:

Jihad is only between Muslims and infidels. Spoils, slaves, and prisoners are only to be taken in war between Muslims and infidels. Muslims in the past conquered, invaded, and took over countries. This is agreed to by all scholars—there is no disagreement on this from any of them, from the smallest to the largest, on the issue of taking spoils and prisoners. The prisoners and spoils are distributed among the fighters, which includes men, women, children, wealth, and so on.

When a slave market is erected, which is a market in which are sold slaves and sex-slaves, which are called in the Qur’an by the name milk al-yamin, “that which your right hands possess” [Koran 4:24]. This is a verse from the Qur’an which is still in force, and has not been abrogated. The milk al-yamin are the sex-slaves. You go to the market, look at the sex-slave, and buy her. She becomes like your wife, (but) she doesn’t need a (marriage) contract or a divorce like a free woman, nor does she need a wali. All scholars agree on this point—there is no disagreement from any of them. […] When I want a sex slave, I just go to the market and choose the woman I like and purchase her.

Around the same time, on May 25, 2011, a female Kuwaiti politician, Salwa al-Mutairi, also spoke out in favor of the Islamic practice of sexual slavery of non-Muslim women, emphasizing that the practice accorded with Islamic law and the parameters of Islamic morality.

A merchant told me that he would like to have a sex slave. He said he would not be negligent with her, and that Islam permitted this sort of thing. He was speaking the truth. I brought up [this man’s] situation to the muftis in Mecca. I told them that I had a question, since they were men who specialized in what was halal, and what was good, and who loved women. I said, “What is the law of sex slaves?”

“Is this forbidden by Islam?” I asked.

An imam in Quebec recently declared that the ruling allowing for slave girls was still in force. 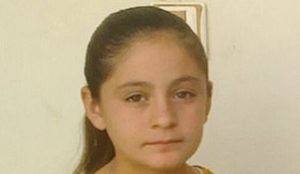 “Pregnant at just 10, girl is trapped as sex slave in ISIS capital as aunt reveals children are beaten with cables by jihadi brides and ‘raped by 100 men,’” by Ian Birrell, The Mail on Sunday, February 24, 2019:

Marwa Khedr was just ten years old when Islamic State jihadis swept into her village in the Sinjar region of Iraq and rounded up all the families at gunpoint.

The men were buried alive in a mass grave, while the women and children were taken to a nearby town in the north of the country, where they were divided up by age.

The most prized, taken off by senior IS figures, were those aged between ten and 20.

This petrified group included Marwa, a member of the Yazidi persecuted minority religion. She had turned ten shortly before the appalling events in August 2014.

Yesterday, her aunt Mahdya, who has just escaped from Baghuz, the last holdout of the IS ‘caliphate’, told me that the final time she saw her niece, she was huddled with others in a market close to Hardan, where she lived, before being taken to the jihadi ‘capital’ of Raqqa.

Months later, a friend told Mahdya she had seen Marwa again and she was pregnant, despite her young age – one more grotesque sign of the barbarism inflicted by IS. It is not known where Marwa is now.

‘There are a lot of girls like her,’ said Ziad Avdal, a former teacher who runs safe houses for Yazidis escaping IS.

‘It is not just terrible that she is pregnant – these young girls may have been raped by 100 men before they become pregnant.’

Mahdya, 29, who fled Baghuz with her two surviving daughters aged eight and nine, was one of almost 6,500 Yazidis kidnapped by the IS fanatics, who despise their ancient faith. Almost half are still missing.

She told a terrible story of being frequently sold, assaulted, forced to marry several times, threatened with having her daughters raped by older men, and seeing them beaten regularly with cables by jihadi brides. Another child was killed in a bombing.

‘I don’t know how many times I was sold,’ she told me.

‘One man only had me for three days, then sold me again. They also held me underground for two months. It was so dark I could not tell night and day.’

Among the men she saw trading Yazidi women and girls from a shop during her four-and-a-half-year nightmare was a white Westerner who joined IS after spending years in prison. He held Mahdya for ten days. ‘He was buying girls, washing them, dressing them in beautiful clothes and then selling them,’ she said.

Another fighter who bought her to clean his house and cook decided after four months that he was going to marry his Yazidi slave. ‘He told me that if I disobeyed, then he would marry my eight-year-old daughter or sell her to another man,’ she said.

Earlier this month, she finally managed to escape the besieged IS enclave and her latest husband, an Uzbek, after months of starvation. She was forced to eat sticks and animal droppings to stay alive. ‘I never thought I would survive,’ she said….

Posted with permission from Jihad Watch