Resistance is NOT Futile Folks! Like the Borg, the Luciferian’s would have you think it is and give up!

Fool me once, shame on you. Fool me Twice, Shame on ME!

Acts 5:29 “Then Peter and the other apostles answered and said, We ought to obey God rather than men.” 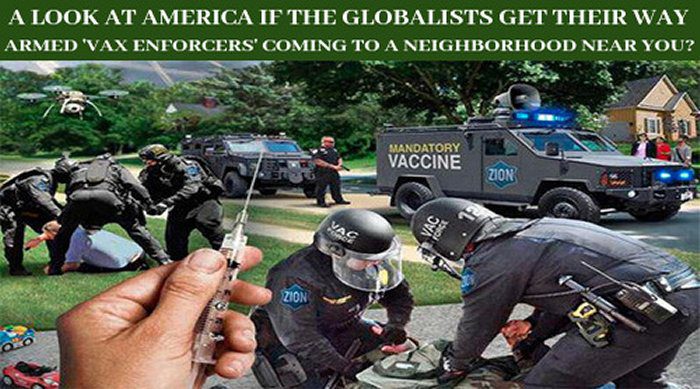 The Camels Nose got under the tent on September 11th 2001.

A small, seemingly innocuous act or decision that will lead to much larger, more serious, and less desirable consequences down the line. The term refers to an alleged Arab proverb that if a camel is allowed to get its nose inside of a tent, it will be impossible to prevent the rest of it from entering. Source

Now the head and part of the body that is Communism/Fascism has entered. If a club, or some other means, is not used to beat the hell out of the camels head, it will succeed in taking over the tent.

What do you do when a poisonous snake needs to be eliminated? You don’t go for the tail folks! You chop off the head of the damn thing!!

As Globalists Call For Anti-Vaxxers To Be Rounded Up And Shot, Americans Should Remain Loaded For Bear!

After reporting on December 9th in this story that the Prime Minister of New Zealand, Jacinda Arden, had recently claimed “we’re rolling out boosters and if someone hasn’t gotten a vaccine in six months, we need them to come back in or we need to go to them,” someone contacted us with a note saying ‘that could never happen here in America’. Yet more evidence emerges that it could if the globalists get their way, and if it does, it won’t be pretty.

With words coming from the mouth of CNBC crackpot host Jim Cramer that starting on January 1st of 2022, just weeks away, unvaccinated Americans should be ’rounded up by force by the US military‘ and subjected to vaxxes that are THEMSELVES killing people, should Cramer get his way, we’d have 100% proof that America had completely fallen to tyranny, thus putting all of America’s 475 million+  civilian owned guns in danger of being confiscated at a time when they’d be about the only thing that could stop America’s complete fall into tyrannical oblivion.

With Cramer just the latest ‘talking head’ in the mainstream media to put out a call for government sponsored violence and terrorism upon the American people over their refusal to take the ‘kill shot’, another ANP reader recently emailed us this story over at the Canada Free Press which reported one Erie, Pennsylvania school teacher is calling for practically the same thing as Cramer is, with Mollie Mumau calling for people who are seeking a religious exemption from the vax to be ’rounded up, shot and killed’.

Are you kidding us? Just the latest reasons why the American people should keep arming up for bear, I myself might even feel differently about taking ‘the vax’ if it really stopped people from getting COVID, passing COVID along to others or dying from COVID, but as we’ve seen over the past year+, it doesn’t.

So folks like Jim Cramer and Mollie Mumau, who is also a member of the Board of the National Education Association, want those who refuse to get vaxxed to be murdered by our own government for refusing to take something that DOESN’T WORK!  Liberal logic 101 in 2021 America.

As Steve Quayle has mentioned numerous times in SQnotes while linking to various stories on his website, “Shot in the arm, shot in the head, either way, you end up dead!” While we pray it never comes to that, no doubt 10’s of millions of very well armed Americans would rather go down fighting than as slaves on their knees. 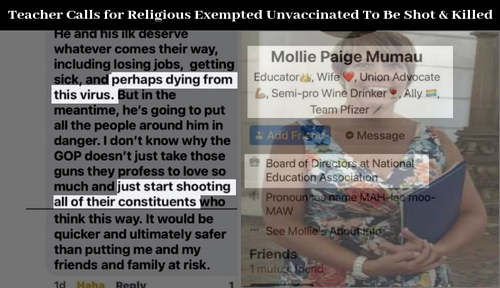 With the original intent and purpose of the 2nd Amendment as written into the US Constitution NOT being to ‘allow Americans to go deer hunting or bear hunting’ but to ensure that tyranny never flourishes here in America, who else would like to see Jim Cramer and Mollie Mumau themselves going door to door across America, attempting to give Americans shots that they don’t want to take?

With any such attempts absolutely something that would make ‘must-watch video’, videos that would surely go mega-viral on youtube as Cramer and Mumau attempt to ‘medically assault’ very well armed and well prepared Americans, many of who have been to Iraq and Afghanistan and fought for America, any attempts to physically force Americans to ‘take a vax’ that might kill them would be the final line in the sand for 10’s of millions of Americans, giving us absolute proof our ‘government of public servants’ has turned into a tyranny. From this DC Dirty Laundry story before we continue.:

Jim Cramer, regular host on CNBC has lost his mind and found a Nazi brain. The crackpot that gives terrible advice on stock trading wants to see the US military on American streets rounding people up starting January 1, 2022 and forcing them to take the experimental COVID shots with a gun to their head. I kid you negative.

Mad in the head Jim Cramer says it’s “psychotic” to let any US citizen walk around unvaccinated for Covid, and that there are no state’s rights when it comes to getting gene therapy clot shots. Nobody has “the right” to get other people sick, he says, so “it’s time that we have to go to WAR against Covid” – he obviously means war against the unvaccinated by having military swat teams hold people down with guns in their faces while being force injected with billions of blood-clotting prions that mimic deadly virus pathogens.

Let the military run the forced-vaccination campaign, says a guy who gives really poor stock-trading advice and hosts CNBC regularly. Plus, Cramer demands universal lockdown for all unvaccinated people, across the globe, enforced by the military and any weapons of mass destruction they may need to shoot everyone up with toxins that have yet to be proven to stop the injected from catching, spreading or dying of Covid. Great plan. This non-Covid expert (clown) needs to stick to what he knows, and that’s pushing weak stock advice (that nobody listens to) on TV. Cramer is going on wild rants demanding death by vaccination be enforced by military police around the world.

And briefly, from this story over at the Canada Free Press, of the post and person seen in the photo above.:

For all of those who choose not to be vaccinated due to religious exemption: this is the unhinged Pennsylvania high school English teacher who says you deserve to die or be shot.

This is Mollie Page Mumau, whose outrageous comments have now been deleted from her Facebook page—but will go on to live forever in a captured screenshot.

Until suddenly ‘disappeared’ from their published list, Mumau was a member of the board of directors of the far-left National Education Association (NEA).

“A member of the board of directors of the National Education Association (NEA) posted a message to Facebook that denounced unvaccinated individuals who claim religious exemptions and asserted they deserved to die, according to the Libs of Tik Tok social media account, which shared a screenshot of the post on Tuesday. (Breitbart, Dec. 7, 2021)

“Mollie Paige Mumau, a Pennsylvania teacher and member of the board of directors of the NEA, appears to identify herself as an “educator, wife, union advocate, semi-pro wine drinker, LGBTQ ally, and ‘Team Pfizer.’”

So, should we have ‘wannabe members of Team Pfizer’ and those who are giving ‘really poor stock trading advice’ deciding if Americans should be ’rounded up and shot’, just because we don’t want to ‘get vaxxed’? With liberal insanity running rampant in 2021, who’s to say that the totally loony-toons Biden administration might not think that to be ‘good advice’ to end the pandemic? Keep loading for bear, America! 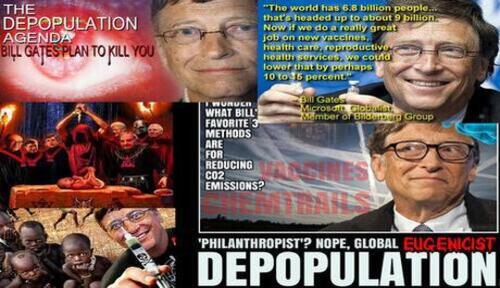 With little doubt remaining that the globalists depopulation agenda is in full swing in 2021 as we race towards 2022 and Jim Cramer’s hope that law-abiding Americans are rounded up and shot starting on January 1st of 2022, we’re only now a few years away from the year 2025, the year that Deagel.com long forecasted America’s population to be down to less than 100 million people, a huge drop of more than 227 million people from the year they made that forecast.

And with the globalists actually believing in their insane minds that they NEED to get the planet’s population down to approximately 500 million, a whopping drop of over 7 billion, to ‘stave off global warming’, what might they do to get there? ANP has published the following stories over the last several months detailing why we believe the globalists ‘depopulation agenda’ is now in full swing.

As They ‘Force Compliance Through Starvation’, Signs ‘Reeducation Camps’ Are Coming To A Place Near You With ‘Total Control Of Populations’ And ‘Depopulation’ Their End Game

The Deception Is Complete: Evidence ‘The Bioweapons Of Depopulation And Genocide’ Being Used On The World Were Developed Over Decades To Create Carnage And Catastrophe

The Bottom Line Is, The ‘Watchmen’ Were Right All Along – We Are Going Through Massive Depopulation As Deviously Forecast By Deagel And Called For On The Georgia Guidestones – Much More Evil And Mass Murder Will Be Carried Out By The Globalists To Complete Their Agenda

Even The MSM Is Now Warning ‘Thousands More People Are Dying Than Usual, But It’s Not From COVID’, As Deagel’s 2025 Forecast For Massive Depopulation Is Unfolding Before Our Eyes

These Charts Say It All: The Depopulation Agenda Is In Full Swing As More And More Americans Are Being Killed And Injured By ‘The Vax’ Being Heavily Pushed By The Genocidal Eugenicists

The common theme that ran through all of those stories? They clearly want us all dead, just as Jim Cramer and Mollie Mumau recently eluded to, though it would clearly be much more ‘efficient’ for the globalists to ‘cull the population’ via ‘the vax’ than by proving they are tyrannical terrorists via rounding up ‘the unwilling’, with any such proof immediately putting the 2nd Amendment and the 475 million+ guns owned by Americans into play.