Nope, this is NOT Satire or Fake News! These Lunatics have been given over to Reprobate Minds! When will the Demented Biden administration, led by that Fool Fauci, adopt the same Lunacy? 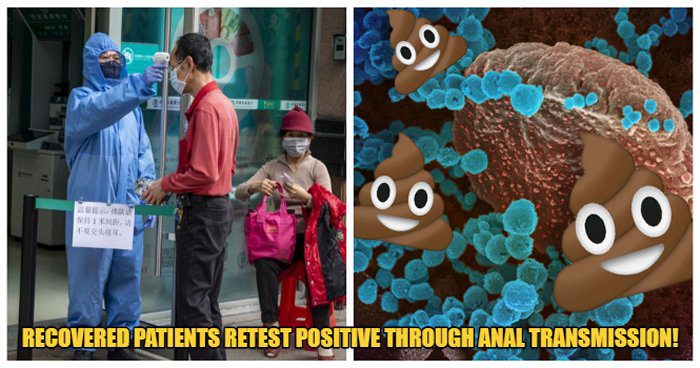 Infectious disease experts have reportedly claimed that the method is a more accurate way to detect the virus.

The New York Post reports: The derriere detection method is being used more frequently in Beijing after a 9-year-old boy tested positive for the highly contagious UK variant of the virus last month, Newsweek reported.

The swabs are inserted 3 to 5 centimeters 1.2 to 2 inches inside the rectum, according to the outlet.

Tongzeng said that the method can increase the rate of detectability and lowers the chances of missing a diagnosis.

“What we’ve found is that in some infected patients, the coronavirus survives for a longer period of time in their digestive tract or excrement than in their respiratory tract,” Tongzeng told the outlet. Source

Flight attendants in China have reportedly been urged to wear disposable diapers and to avoid using airplane bathrooms to help stop the spread of coronavirus.

Business Inider reports: The recommendation came alongside rules for other standard personal protective equipment, or PPE, like masks, gloves, and goggles. Those rules echoed those issued by the US Centers for Disease Control (CDC), which also call for flight crew to wear disposable gloves and facemasks.

The CDC guidelines including details on how to thoroughly scrub an airplane after each, and how to get rid of protective gear without spreading the virus. “After use, PPE must be carefully removed to avoid contaminating your skin or clothing,” said the guidelines.

In October, data showed flight attendants and other airline workers had lower rates of COVID-19 infection. Airlines said at the time that it illustrated how effective PPE was.

The US Association of Flight Attendants-CWA meanwhile urged flight staff to “wear a mask, wash hands frequently, and use all the safety tools at our disposal to remain healthy.” In June, the union said face masks were essential for building customer trust.

The Chinese guidelines went a step futher, however, saying that by wearing disposable diapers, cabin crew could avoid the usually tight airplane bathrooms. They said the tiny spaces could be hotspots for the spread of coronavirus. The recommendations were meant for flight attendants in areas with especially high infection rates.

Meanwhile, pilots and other members of the flight crew were asked to wear goggles and masks, but not diapers, per Bloomberg.  Source