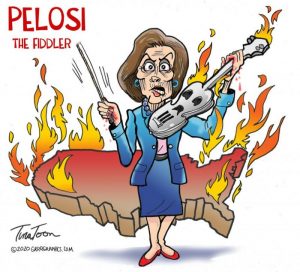 Niamh Harris | News Punch – After condemning the storming of the U.S. Capitol building on January 6, House Speaker Nancy Pelosi’s hypocritical comments from 2011 have now come back to haunt her.

Following the 2011 invasion of the GOP-led Wisconsin State Capitol, Rep. Pelosi went on record praising the storming as an “impressive show of democracy in action.”

Shortly after the storming of the Capitol earlier this month, Pelosi introduced the second impeachment against President Trump for “inciting” the violence.

The invasion was an attempt to block a vote on collective bargaining reform.

Thousands of demonstrators illegally entered the building by violently breaking down doors and breaking windows.

The attack garnered much praise from Pelosi and other senior Democrats at the time.

@WeGotEd @thelastword I stand with the students & workers of #WI, impressive show of democracy in action #solidarityWI

Foxnews.com reports: The occupiers were praised publically by Pelosi for their “impressive show of democracy in action.” The House Speaker took to Twitter to express her “solidarity” with the activists as they attacked the Capitol, and sent senators into hiding until police managed to remove them from the building.

Fox News contributor Mark Thiessen highlighted Pelosi’s previous remarks in a column for the Washington Post earlier this month, oberving that “in other words, Democrats were for occupying capitols before they were against it.”