Sesame Street’s Count Von Count had to be called in to help the inept, incompetent Ass Clown Democrats count their vote for them! 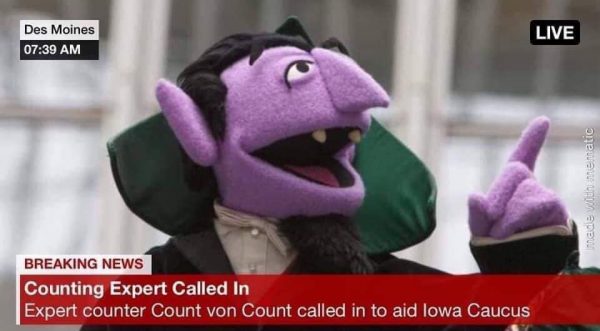 Rumor has it that Bert and Ernie were meeting with Homosexual Mayor Pete Buttigieg to help him with his victory speech!

Meanwhile the Cookie monster was handing out Milk and Cookie Crumbs to the losers! Mr. Snuffleupagus and Big Bird were waiting in the wings should they be needed to stop and potential Suicidal maniacs from hurting themselves! 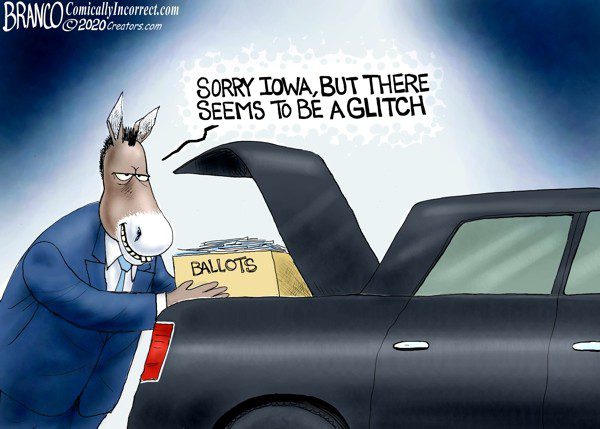 You just have to mock and have some fun sometimes!!

Michael Snyder – The rest of the world is laughing at us. After what just took place in Iowa, we certainly do not have any right to lecture other nations about how to run their elections. It was a dumpster fire of epic proportions, and the entire globe is talking about it. Apparently the Democrats have decided to run their elections the same way that they run their cities. The Iowa Democratic Party had just one job to do, and they failed in spectacular fashion. Collecting voting results and reporting them to the public shouldn’t be complicated, but these days incompetence has become the norm. From one end of the country to the other it seems like people are competing to see who can be the most incompetent, and our population is becoming more “dumbed down” with each passing day.

The debacle in Iowa is being blamed on a faulty app, and I suppose that we shouldn’t be surprised.

After all, just about everything that we put on our phones and computers these days must be constantly “fixed” or “patched” due to endless errors.

This app that the Democrats were using did not have to be complicated. It simply needed to accurately relay data from the precincts to the Iowa Democratic Party, but thanks to “a coding error” that did not happen…

Due to a coding error, the app, created by a company called Shadow Inc., wasn’t reporting the correct data, according to the Iowa Democratic Party. The error resulted in the Democrats delaying all public reporting of the results of Monday’s caucuses, and has sown chaos and confusion in a hotly contested and deeply important primary.

After all of the hot air that the Democrats have been blowing around about “the integrity of our elections”, you would think that they would have their act together for the 2020 election.

But instead they just showed the rest of the world what not to do.

And it isn’t as if this was a complete surprise. According to CNN, it was clear well in advance that the app “was not working properly”…

Precinct captains from across Iowa began realizing days before the caucuses that the app was not working properly. Some complained to their county party leadership, others said nothing and hoped it would work at the needed moment and some just planned to call in their results, as has been done in the past. And most county party chairs openly worried about the lack of training on the reporting system.

In fact, only about one-fourth of all precinct chairs were able to successfully download the app…

Only a quarter of nearly 1,700 precinct chairs even successfully downloaded the app, according to a Democrat familiar with the matter.

“I couldn’t get it to work,” said Jane Podgorniak, the Worth County party chair. “I tried and tried.”

There never was any training for the precinct chairs, and there was mass confusion among local party officials. In Polk County, the chairman of the Democratic Party told his precinct chairs to simply call in the results, but that didn’t work either. The following comes from the New York Times…

So last Thursday Mr. Bagniewski, the chairman of the Democratic Party in Iowa’s most populous county, Polk, instructed his precinct chairs to simply call in the caucus results as they had always done. But during Monday night’s caucuses, those precinct chairs could not connect with party leaders via phone. Hold times stretched past 90 minutes. And when Mr. Bagniewski had his executive director to take pictures of the results with her smartphone and drive over to the Iowa Democratic Party headquarters to deliver them in person she was turned away without explanation.

Some precinct chairs were on hold with headquarters for two or three hours on Monday night, and it is still not clear why Iowa Democratic Party officials were not more responsive.

Needless to say, this was a complete and utter embarrassment for the national Democratic Party, and DNC Chair Tom Perez is pledging that such a debacle will never happen again…

“What happened last night should never happen again,” Perez wrote in the statement. “We have staff working around the clock to assist the Iowa Democratic Party to ensure that all votes are counted. It is clear that the app in question did not function adequately. It will not be used in Nevada or anywhere else during the primary election process. The technology vendor must provide absolute transparent accounting of what went wrong.”

Hopefully they can get their issues ironed out, but the truth is that the Democratic Party has a long history of complete and utter incompetence.

Of course the Republican Party is not much better. In fact, I could tell you stories about Republicans in my area that would make your hair stand on end.

Sadly, the truth is that we have become a raging “idiocracy” where people can’t seem to do much of anything right. At one time we were a shining example to the rest of the world, but today we are a horde of entertainment-addicted zombies that never learned what it means to grow up and act like adults. For example, just consider what is happening at one of our most prestigious universities…

Students at Yale University are being encouraged to participate in a variety of programs offered by the Chaplain’s Office, including a weekly “Cookies and Coloring” hour and a campus “Bouncy Castle” during nice weather.

The children’s activities are promoted as opportunities for adult students to relieve anxiety and disconnect from technology at the Ivy League institution.

The more mindless our entertainment, the more we like it. The number of alcohol-related deaths has doubled over the past 20 years, the suicide rate has soared to a record high, and we are taking more legal and illegal drugs than ever before. And in just about every category of immorality that you can possibly imagine we are either leading the world or we are in very close contention for the top spot. We are a complete and utter mess, and we on a road that inevitably leads to national ruin.

Of course if anyone dares to offend our snowflake sensibilities by confronting us with the truth, many of us instantly melt down and start throwing a temper tantrum.

Needless to say, what I have just said does not apply to everyone. But overall our society is rapidly degenerating all around us, and our nation has no future if we stay on this path.

Posted with permission from Michael Snyder