Yep, the Lunatic Leftists have gone Looney! They are the Enemy’s of Humanity and will NOT STOP pushing their Lunatic Luciferian Agenda!! 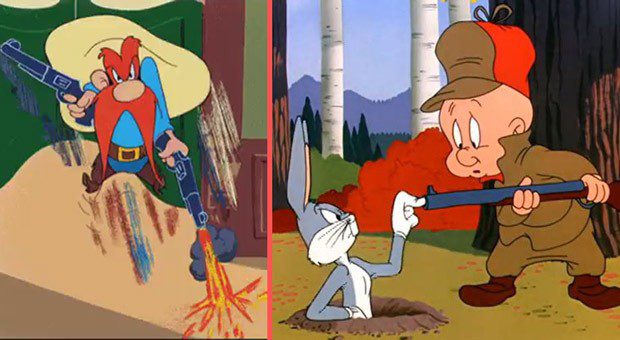 Yosemite Sam and Elmer Fudd are being stripped of their guns

Neon Nettle – Looney Tunes has announced it is stripping guns from their popular cartoon characters Yosemite Sam and Elmer Fudd as producers vow to tackle violence in America.

Elmer Fudd will no longer use his rifle to hunt Bugs Bunny in a new “woke” version of the Warner Bros classic Looney Tunes cartoon series on HBO Max.

And Yosemite Sam, who is instinctively described as “gun-toting,” will no longer carry his pistols.

The latest change to the iconic animated series is a response to the gun violence in the US, the Telegraph reported.

Historically the toons largely revolve around Fudd’s never-ending chase of Bugs Bunny, with his classic catchphrase, “What’s up, Doc?”

“Wabbit” hunter Fudd gets outsmarted by Bugs at every turn, even though he always carried his trusty shotgun — until now.

“But we can do cartoony violence — TNT, the Acme stuff.

“All of that was kind of grandfathered in.”

According to The Daily Mail, frustrated hunter Fudd will still get a scythe to hunt Bugs Bunny instead of his classic firearm.

The series airs on HBO Max and premiered last week.

Each episode will last between one and six minutes.

Yosemite Sam, who traditionally carried pistols, is also an enemy of Bugs Bunny.

“As much as we possibly could, we treated the production in that way.”

“Looney Toons is pretty much the antithesis of that.

Read more about these Communists here