Update 10/23: Well, I have to say I am very surprised and must admit that Kristen Welker did a Fair Job as moderator. I have not checked, but I am sure her Communist Colleagues with Trump Derangement Disease are not happy at all. I am sure they will hate on her for being fair! I give her an “A”!!

Instead of a battle, the Girly-Men (and women) of the Debate Commission has made it to be like the Tiny Tim song “Tip Toe through the Tulips”!

The Debate Commission Will Silence Microphones in Final Debate

The Debate Commission is Full of Democrats and Never Trumpsters. There is supposed to be an EQUAL number of Democrats and Republicans. Just because there is an “R” after the RINOs name, that means NOTHING! 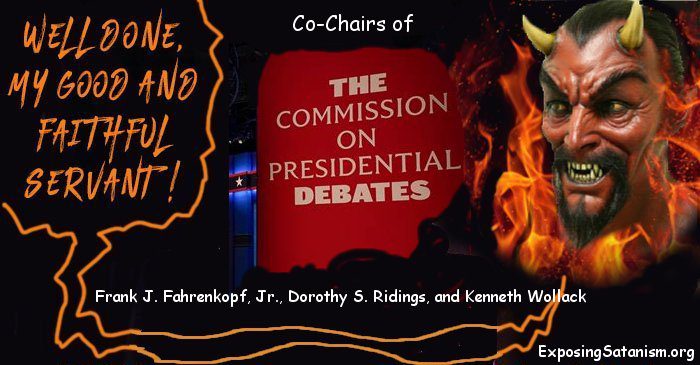 The Commission on Presidential Debates (CPD) has adopted a new rule ahead of Thursday’s second and final presidential debate and will silence the microphone of the candidate who does not have the floor during the uninterrupted two-minute periods at the start of each segment.

The Commission cited their prior announcement to consider “additional structure” to future debates following the first presidential debate with moderator Chris Wallace. The first debate saw several interruptions from both candidates and Wallace. While Joe Biden (D) set the tone by interrupting first, Wallace later stated that Trump bore the “primary responsibility” for what occurred during the debate.

“The Commission has determined that it is appropriate to adopt measures intended to promote adherence to agreed upon rules and inappropriate to make changes to those rules,” it said in a statement, detailing its plan to enforce the rule:

Under the agreed upon debate rules, each candidate is to have two minutes of uninterrupted time to make remarks at the beginning of each 15 minute segment of the debate. These remarks are to be followed by a period of discussion. Both campaigns this week again reaffirmed their agreement to the two-minute, uninterrupted rule. The Commission is announcing today that in order to enforce this agreed upon rule, the only candidate whose microphone will be open during these two-minute periods is the candidate who has the floor under the rules. For the balance of each element, which by design is intended to be dedicated to open discussion, both candidates’ microphones will be open.  Read the rest at Breitbart News

How about It? If tough guy Joe Biden can stand up to Corn Pop, why can’t he stand toe to toe with President Trump? He did say he wanted to take him out behind the gym!

“Corn Pop was a bad dude. And he ran a bunch of bad boys,”

With all the revelations coming out about the Pervert Biden Family, maybe ole Pedo Joe wanted to sniff and grab hold of the President!

This next debate will be NO different that the previous ones where Chrissy Wallace and Jezebel  Savannah Guthrie were in charge. Trump will once again have to debate Two clowns, but more so Jezebel Fake News Purveyor Kristen Welker.

President Trump has ripped final debate moderator Kristen Welker as “extraordinarily unfair” after highlighting an exposé in The Post about her family’s ties to the Democrats.

“She’s always been terrible & unfair, just like most of the Fake News reporters, but I’ll still play the game,” the commander in chief tweeted Saturday after son Don Jr. shared The Post’s story.

“The people know! How’s Steve Scully doing?” he asked, a sarcastic reference to the C-SPAN political editor who was suspended after lying about being hacked after being called a “never Trumper.”

Trump also went after Welker during his Saturday night rally in Janesville, Wisconsin, after sarcastically referring to “totally unbiased anchors.”

“We have another one of them coming up next week,” he said, then naming the NBC News White House correspondent.

“I’ve known her for a long time, she’s extraordinarily unfair but that’s all right,” the president told the crowd. Read more at the New York Post

Kristen Welker, The Next Debate Moderator, Got Caught Tipping Off Hillary Clinton in 2016