Is This Obama’s Birth Certificate?

by Rev. Austin Miles – The biggest hoax on earth took place when Billionaire Communist George Soros maneuvered Barack Hussein Obama into the Oval Office as (hard swallow), President of the United States. This writer had questioned how he was able to be elected first as a United States Senator since he was not born in the U.S. but in the African Land of Kenya. But he was. The Kenya newspapers were thrilled with this news story that proclaimed: “Kenya is proud to learn that Barack Hussein Obama, who was born and raised right here in Kenya, one of us, has been elected as a United States Senator.!” Then to prove their point for the world to see, that newspaper posted his birth certificate to back up their claim that Obama was indeed a Kenyon….’one of us.’ That birth certificate would prove the claims.

This writer had gone into the newspaper archives and found the birth certificate. I was to check back to make a copy of that document. By the time I did, within a day, that certificate had been scrubbed so nobody could see it. I kicked myself through three states, being mad at myself for not copying it immediately. The second line at the top of the certificate does show that he was born in Kenya, not the U.S. Obama is such a phony that he is not even fully black. He had a white mother.

Indeed, when Obama produced (yes, ‘produced’) that bogus birth certificate from Hawaii, it listed the name of a hospital that was not even there when he was born. The real evidence for this columnist was that in the “Race” box, it stated that he was…African American. Wrong! The term used in the early 50s for a black person was NEGROE. The African American ID came much later. So that was a clear tip off to the phoniness of that so-called deceptive “birth certificate.”

Obama was like a Manchurian Candidate. Nobody really knew anything about him. But he had a huge assignment. To sabotage America and make the U.S. pliable for Communist take-over. As to why he received so many votes for POTUS was pure manipulation.,Soros, the evil master-mind got it out in the media, (that he owns and controls),that because of “white guilt”and rightfully so over slavery, (SHAME ON AMERICA!) people who would not vote for him would be confirmed as racist. A master touch of deception.

Soros was so confident that Obama would be swept into the Oval Office that he put down a million dollars to secure the Grant Park facilities in Chicago. for Obama’s “Election Night Victory Party.” And that million bucks was paid SEVERAL MONTHS BEFORE THE ELECTION. They KNEW that the election had already been manipulated. And why was this columnist the only one to notice and inquire how they were able to get the stage fixed and decorated with thousands of seats set up in Grants Park just as the election concluded? They couldn’t. This was a ‘done deal’ all planned in advance.

Readers, please send this to your representatives. This proves Obama was a fraudulent president who had crashed his way into the Oval Office, which means that every government action he instigated must be cancelled. including Obamacare. The government must confiscate every thing of wealth he has accumulated by scamming the U.S. including the mansion he bought after the election within walking distance of The White House.

Again, the attached birth certificate that was sent to me by an anonymous reader absolutely matches the one I saw on the Kenya Newspaper archives. It is totally possible that this is it. To borrow a phrase, ‘We report-you decide.’ 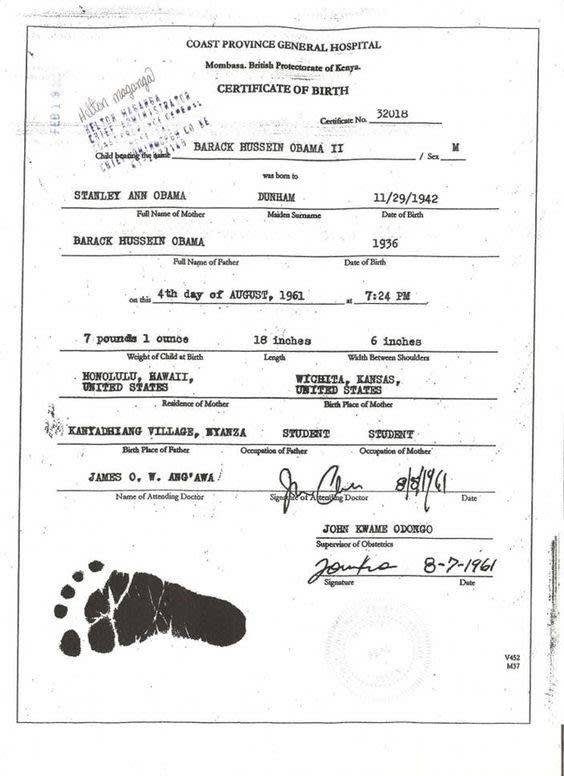