Got this as a story submission,  so I figured I would have a bit of fun with it in this Sin Sick Crazy World we live in these days! 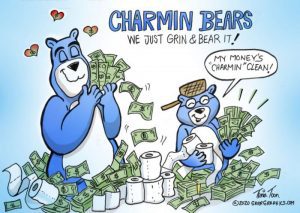 Rev. Austin Miles – We’re sure you’ve already heard about the man who hoarded toilet paper, having been filled with the horrific idea that there would be no more available as this pandemic continues. That scenario alone scared the man to such an extent that he would especially need the product he sought. And this virus, it is said, will go on for a loooooong time. The product, of course, is a necessary commode commodity that was far better suited for the need represented than sandpaper, so the rattled man decided to take no chances.

He bought, now get this, $10,000 worth of Mr. Whipple’s product. Later he realized that the purchase of all this toilet paper wiped out his savings, so he went back and tried to get a refund but was refused while he was left standing in line.

We will try and get an address for this man in case someone gets hit with a cramp while driving in his area.

There are many crazy things to consider while navigating this life, especially considering the political climate of today. All candidates employ a remarkable skill of talking out of both sides of their mouth which takes some practice. Meanwhile, this writer admittedly still has many things to learn.

Not fully understanding how a “stimulus package” works, Reader Ed Culbertson galloped to the rescue and educated me on the details. Here is the story:

It is a slow day in the small Saskatchewan town of Pumphandle, and streets are deserted. Times are tough, everybody is in debt, and everybody is living on credit.

A tourist visiting the area drives through town, stops at the motel and lays a $100 bill on the desk saying he wants to inspect the rooms upstairs to pick one for the night. As soon as he walks upstairs, the motel owner grabs the bill and runs next door to pay his debt to the butcher.

The butcher takes the $100 and runs down the street to retire his debt to the pig farmer.

The pig farmer takes the $100 and heads off to pay his bill to his supplier, the Co-op.

The guy at the Co-op takes the $100 and runs to pay his debt to the local prostitute who has
been facing hard times and has had to offer her “services” on credit.

The hooker with the hundred dollar bill rushes to the hotel and pays off her room bill with the hotel owner.

The hotel proprietor then places the $100 back on the counter so the traveler will not suspect anything.

At that moment the traveler comes down the stairs, states that the rooms are not satisfactory, picks up the $100 bill and leaves. No one produced anything. No one earned anything.

However, the whole town is now out of debt and now looks to the future with a lot more optimism.

And that, ladies and gentlemen, is how Stimulus Package works.

Once again, our thanks to Ed Culbertson for setting us straight on this puzzling political action that seems to work.

Ain’t what you thought is was huh, and don’t you wish it really worked that way?

Anybody want to lay a couple thousand on my desk instead of a measly $100? I won’t guarantee you will get you $2000 back, but I will be a happy camper at least!