What is a Hypocrite? In simple plain English; Someone who goes around whining about something, then does the same thing they are whining about!

If everyone would just heed this one Scripture, the World would be a better place!

Got Questions – In essence, “hypocrisy” refers to the act of claiming to believe something but acting in a different manner. The word is derived from the Greek term for “actor”—literally, “one who wears a mask”—in other words, someone who pretends to be what he is not.

The Bible calls hypocrisy a sin. There are two forms hypocrisy can take: that of professing belief in something and then acting in a manner contrary to that belief, and that of looking down on others when we ourselves are flawed.

The prophet Isaiah condemned the hypocrisy of his day: “The Lord says, ‘These people come near to me with their mouth and honor me with their lips, but their hearts are far from me. Their worship of me is made up only of rules taught by men’” (Isaiah 29:13). Centuries later, Jesus quoted this verse, aiming the same condemnation at the religious leaders of His day (Matthew 15:8-9). John the Baptist refused to give hypocrites a pass, telling them to produce “fruits worthy of repentance” (Luke 3:8). Jesus took an equally staunch stand against sanctimony—He called hypocrites “wolves in sheep’s clothing” (Matthew 7:15), “whitewashed tombs” (Matthew 23:27), “snakes,” and “brood of vipers” (Matthew 23:33).

We cannot say we love God if we do not love our brothers (1st John 2:9). Love must be “without hypocrisy” (Romans 12:9). A hypocrite may look righteous on the outside, but it is a façade. True righteousness comes from the inner transformation of the Holy Spirit not an external conformity to a set of rules (Matthew 23:5; 2nd Corinthians 3:8).

Jesus addressed the other form of hypocrisy in the Sermon on the Mount: “Why do you look at the speck of sawdust in your brother’s eye and pay no attention to the plank in your own eye? How can you say to your brother, ‘Let me take the speck out of your eye,’ when all the time there is a plank in your own eye? You hypocrite, first take the plank out of your own eye, and then you will see clearly to remove the speck from your brother’s eye” (Matthew 7:3-5). Jesus is not teaching against discernment or helping others overcome sin; instead, He is telling us not be so prideful and convinced of our own goodness that we criticize others from a position of self-righteousness. We should do some introspection first and correct our own shortcomings before we go after the “specks” in others (cf. Romans 2:1).

During Jesus’ earthly ministry, He had many run-ins with the religious leaders of the day, the Pharisees. These men were well versed in the Scriptures and zealous about following every letter of the Law (Acts 26:5). However, in adhering to the letter of the Law, they actively sought loopholes that allowed them to violate the spirit of the Law. Also, they displayed a lack of compassion toward their fellow man and were often overly demonstrative of their so-called spirituality in order to garner praise (Matthew 23:5–7; Luke 18:11). Jesus denounced their behavior in no uncertain terms, pointing out that “justice, mercy, and faithfulness” are more important than pursuing a perfection based on faulty standards (Matthew 23:23). Jesus made it clear that the problem was not with the Law but the way in which the Pharisees implemented it (Matthew 23:2-3). Today, the word pharisee has become synonymous with hypocrite.

It must be noted that hypocrisy is not the same as taking a stand against sin. For example, it is not hypocrisy to teach that drunkenness is a sin, unless the one teaching against drunkenness gets drunk every weekend—that would be hypocrisy.

As children of God, we are called to strive for holiness (1st Peter 1:16). We are to “hate what is evil” and “cling to what is good” (Romans 12:9). We should never imply an acceptance of sin, especially in our own lives. All we do should be consistent with what we believe and who we are in Christ. Play-acting is meant for the stage, not for real life.

John 8:32 “And ye shall know the truth, and the truth shall make you free.” 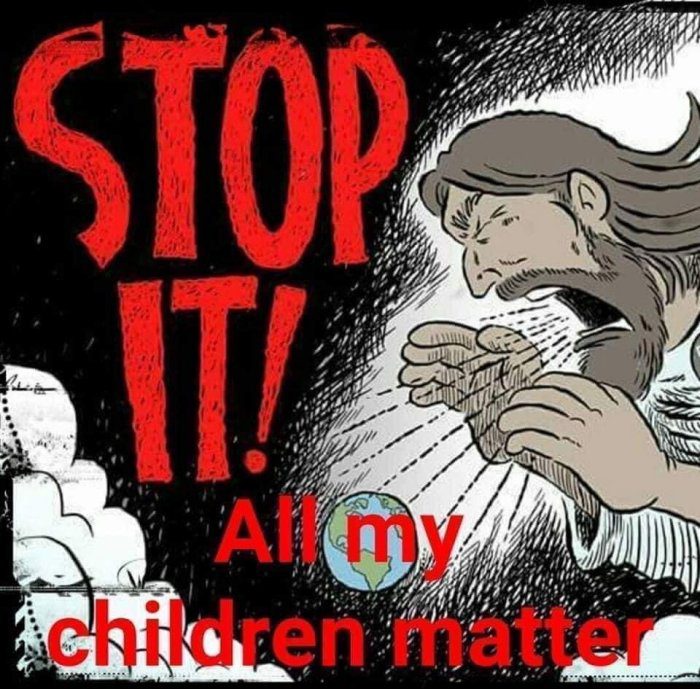 Info Wars – In another example of anti-white racism, the Black Lives Matter group forced allied white protesters to the back of the march during a rally in Seattle, Washington.

Reports from the protest on Friday reveal that the BLM organization created a “black-led march” to the Antifa-controlled Capitol Hill Autonomous Zone (CHAZ) in the heart of downtown Seattle.

One participant told The Gateway Pundit:

I attended today’s Black Lives Matter march in Seattle, which started downtown before making its way to the Capitol Hill Autonomous Zone.

As an early supporter of BLM I was saddened and disheartened to see that the organizers were requiring all Whites to go to the back of the march, with protest leaders shouting, screaming and shoving, militantly ordering “Whites to the back!” Later, I was told this had been published in advance on their website and any surprise on my part was my own fault. Upon checking, this turned out to be factual.

I truly felt this is inconsistent with the message of diversity, inclusion and equity of BLM and an afront to civil rights pioneers like Rosa Parks.

Sure enough, the Black Lives Matter Seattle chapter website explains the order to force whites to the back of the march.

Not only that, but BLM activists are also pressuring whites to pay $10 each in “reparations” in order to stay at CHAZ.

All white people are required to give $10 to one black person in the CHAZ autonomous zone. pic.twitter.com/LRETSvOzci

Isn’t this the kind of racist behavior that compelled civil rights icon Rosa Parks to refuse to sit in the back of the bus in Alabama in 1955?