If they do, only 39 will be fired and none will hit the target…. again! But as Steve Quayle comments on a headline at his website:  “HERE COMES THE BURDEN OF DAMASCUS AND ISAIAH 17” 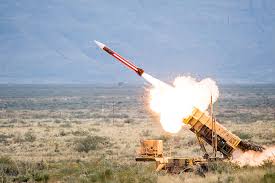 Multiple outlets are reporting that Russia has delivered a message to the Israel government on behalf of Syria’s Assad regime stating that any more Israel Air Force strikes into Syrian territory will be answered with a barrage of Scud missiles. In particular, it describes what will be targeted and why. If a Israel air strike hits civilian infrastructure, Syria will launch missiles aimed at Israel’s port in Haifa as well as its nearby petrochemical plant. If strikes hit Syrian military-related targets, the Scud missiles will be targeted at Israel Defense Force bases. Read more here.

I remember in Desert Storm, 1991, Saddam Hussein firing 39 Scud Missiles into Israel. I also remember the late J.R. Church saying there would not be another scud missile fired because of Psalms 91 and Jewish Law. In Biblical times, people received 40 lashes for a crime. So to not break the law, in case they miscounted, they would administer 39. If I remember correctly, he said that 40 missiles would mean that God had taken his protection away and did not love them any longer.

Deuteronomy 25:3 states that a criminal should not receive more than forty lashes. In order to avoid possibly accidentally breaking this command, the Jews would only give a criminal 39 lashes. The Apostle Paul mentioned this practice in 2 Corinthians 11:24, “five times I received from the Jews the forty lashes minus one.” Source Got Questions and also see Flogging

So a 40th missile would mean all hope for Israel was gone! It is also interesting that NO ONE, not one Jew died from all those 39 missiles! Most never hit the target and went off into the desert! The greatest fear the people had was that Saddam would tip the missiles with chemical agents. Thus every time the air raid sirens would go off, all citizens would don their gas mask and hurry to a shelter or a room they had gas proofed!

Psalms 91 “He that dwelleth in the secret place of the most High shall abide under the shadow of the Almighty.2 I will say of the LORD, He is my refuge and my fortress: my God; in him will I trust.3 Surely he shall deliver thee from the snare of the fowler, and from the noisome pestilence.4 He shall cover thee with his feathers, and under his wings shalt thou trust: his truth shall be thy shield and buckler.5 Thou shalt not be afraid for the terror by night; nor for the arrow that flieth by day;6 Nor for the pestilence that walketh in darkness; nor for the destruction that wasteth at noonday.7 A thousand shall fall at thy side, and ten thousand at thy right hand; but it shall not come nigh thee.8 Only with thine eyes shalt thou behold and see the reward of the wicked.9 Because thou hast made the LORD, which is my refuge, even the most High, thy habitation;10 There shall no evil befall thee, neither shall any plague come nigh thy dwelling.11 For he shall give his angels charge over thee, to keep thee in all thy ways.12 They shall bear thee up in their hands, lest thou dash thy foot against a stone.13 Thou shalt tread upon the lion and adder: the young lion and the dragon shalt thou trample under feet.14 Because he hath set his love upon me, therefore will I deliver him: I will set him on high, because he hath known my name.15 He shall call upon me, and I will answer him: I will be with him in trouble; I will deliver him, and honour him.16 With long life will I satisfy him, and shew him my salvation.

Yes it may indeed bring the Destruction of Damascus to a “Ruinous Heap” which is Prophesied in Isaiah 17:1 “The burden of Damascus. Behold, Damascus is taken away from being a city, and it shall be a ruinous heap.”

For you heathen who do not have a Bible here is a link to Isaiah 17!