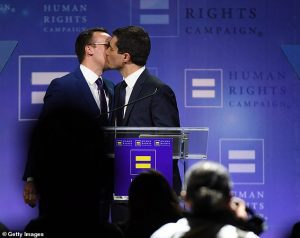 Matt Margolis | PJ Media – Pete Buttigieg manufactured a feud between him and Mike Pence, declaring Pence a bigot and a homophobe—despite their apparent cordial working relationship while Pence was governor of Indiana and Buttigieg was mayor of South Bend.

It turns out that’s not the only thing Buttigieg has manufactured for the sake of his presidential campaign. On May 1, the Washington Post profiled Buttigieg’s “husband” Chasten, which claimed that when Chasten came out as gay to his family that they didn’t accept him, resulting in his estrangement from his family, forcing him to be homeless for a period of time. It’s the kind of story that really tugs and the bleeding heartstrings of liberal Democrats and they eat it up.

And it’s all a fabrication.

According to Pete Buttigieg’s brother-in-law Rhyan Glezman, the stories reported by the Washington Post aren’t true, and the Glezman family has always been supportive of Chasten. The lies about his family were manufactured to create a compelling backstory. “A mayor from a small city and his husband, a child who grew up with nothing and his parents kicked him out … it makes a perfect political story for the campaign,” Rhyan Glezman said in an interview with the Washington Examiner. “To me that’s very sad. If that’s all you have to stand on, you’re not fit to be president of the United States.”

According to Glezman, no one in the family was actually shocked when Chasten came out, and he was not banished from the family and forced into homelessness afterward. “He went away,” Glezman explained. “He was struggling for a time. But there was nothing on the family end that said he had to leave.”

Glezman was particularly angered, he added, by accounts suggesting the family was poor and that Chasten went without as he was growing up. It was little more than an example of playing the “victim card” for political gain.

“The story makes it look as if he came from nothing, a poor family,” he said. “Chasten had everything, from cellphones paid for, car insurance paid for.”

Glezman’s bond with his brothers, added the married father of one, was marked by a tattoo of a cross on his arm inscribed, “Forever.” And he explained how he treated his younger brother to a trip to an amusement park for his 21st birthday. “Would I do that if we didn’t have a relationship?”

They last hugged at the funeral for their grandmother a year ago. Glezman said he has hosted his brother’s previous boyfriends and that he went to a baseball game with Chasten and Pete Buttigieg last year.

According to the Washington Examiner, Glezman “was not prepared for the reaction to the Washington Post story and how what he views as a lie spread like wildfire online.” The false narrative, likely crafted by the Buttigieg campaign, has resulted in Glezman being flooded with death threats and other angry messages via text, email, and social media.

Buttigieg has managed to distinguish himself from other candidates by exaggerating his and Chasten’s backstories to play the gay victim card and win over potential voters. Pete Buttigieg is basically taking a page right out of Barack Obama’s playbook. Obama used any opportunity he got to call this country racist and to claim himself a victim of racism. Just swap racism with homophobia and you’ve got Buttigieg’s campaign strategy. Apparently, smearing family is okay if it can earn you sympathy votes. There’s a reason why Chasten has become a pseudo-celebrity amongst the left (he has over 330,000 Twitter followers), while most people probably can’t even name the spouses of other Democratic candidates. Chasten is being thrust into to spotlight to help remind Democratic voters that this is their opportunity to elect a gay man president. Make no mistake about it, if Pete Buttigieg wins the Democratic nomination, his running mate won’t be whomever he picks to be his vice president, his running mate will be Chasten.

Read it all at PJ Media