He is surely one of the Traitorous Judas’ and Jezebels that are in Satan’s Service!! 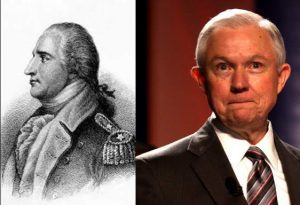 Jim Hoft | Gateway Pundit – During his interview with CBS on Friday Attorney General William Barr disclosed that the Huber investigation was over.

Huber was assigned to look at FISA applications and the electronic surveillance during the 2016 election and actions by Hillary Clinton.

Huber did not even start his investigation.

He didn’t do a damn thing!

AG Barr said this morning on CBS News that Huber did nothing and his work was taken over by the team he set up under US Attorney John Durham:  (You can see the video at the CBS link above)

JAN CRAWFORD: Um, what’s the status of Huber’s investigation in Utah? I think the former Attorney General Sessions had asked him to look at this.

WILLIAM BARR: Right, so Huber had originally been asked to take a look at the FISA applications and the electronic surveillance but then he stood back and put that on hold while the Office of Inspector General was conducting its review, which would’ve been normal for the department. And he was essentially on standby in case Mr. Horowitz referred a matter to him to be handled criminally. So he has not been active on this front in recent months and so Durham is taking over that role. The other issues he’s been working on relate to Hillary Clinton. Those are winding down and hopefully we’ll be in a position to bring those to fruition.

JAN CRAWFORD: So he won’t be involved in this really at all then?

JAN CRAWFORD: This is his role, it’s done?

JAN CRAWFORD: And now Durham is going to pick up–

We reported this on Huber three days earlier from an interview of Joe diGenova and AG Barr has confirmed it.

This confirms what we long suspected.  Jeff Sessions was part of the coup against President Trump.

We first published this over a year ago in November of 2017 – and each day it became more and more apparent that Jeff Sessions was failing America and his duties as Attorney General.

Benedict Arnold is the name that goes down in US history as the greatest traitor to the nation. According to biography.com –

Benedict Arnold was born in Norwich, Connecticut, on January 14, 1741. A member of the Sons of Liberty, Arnold rose to the rank of general in the Continental Army during the Revolutionary War. Frustrated by the lack of recognition, he subsequently switched sides to the British and plotted the surrender of West Point. When his traitorous plans came to light, Arnold escaped capture and eventually made his way to England. He died in London on June 14, 1801.

We believe that the US today is in perilous times. President Trump was voted into office by the American people in November 2016 on an electoral landslide. Before the 2016 election he was attacked, but since the election the prior Obama Administration, the Clintons, the Democratic Party, the mainstream media (MSM), Hollywood, some elitist Republicans and the ‘deep state’ have tried to steal his win. This concerted attack in large part is because liberals in the US don’t want President Trump to uncover their illegal and traitorous actions when Obama was President.

The only thing stopping President Trump for two years was his own Attorney General Jeff Sessions. Sessions recused himself from any investigations into Russia allowing a corrupt investigation into the President’s actions with Russia and/or any other dirt the investigators can come up with. The investigation is not founded in US law, it’s a farce. The investigators are biased, former Hillary and Obama team members and supporters and many, if not all, are involved with the Uranium One scandal.

Uranium One refers to the sale of 20% of US uranium to the Russians by the Obama Administration and his Secretary of State Hillary Clinton. The Clintons made $146 million on the deal and no doubt Obama did too. Sessions’ Assistant Attorney General, Rosenstein approved the Uranium One deal and then he hired Mueller to clean it up. At the time the deal was approved there was a special FBI investigation ongoing into the deal and it was covered up until only a few weeks ago. The Clintons know Uranium One was a big deal as reported in a leaked email from the Clinton campaign.

Many experts in the case believe that the Uranium One deal is the biggest scandal in American history. But Jeff Sessions did nothing.  Because of this Jeff Sessions will go down as the greatest traitor in US history – even worse than Benedict Arnold himself.

Since that time the Mueller Special Counsel has committed a series of criminal acts that will change the US legal system for generations to come.  Some people on the Internet claimed Sessions was stealth and behind the scenes working on some grand plan to come out and catch and unveil all the bad guys.  Some thought he was working with the imaginary Q who on the Internet was assuring followers of Sessions being in charge.  This was never close to the truth.  Sessions did nothing.

Sessions is the main reason for the deep state still in full place and the Mueller investigation being created and still ongoing in spite of obvious unconstitutional and criminal actions.

AG Sessions –  Your legacy is clear.  You were part of the Deep State by your actions alone.  AG Sessions will go down as one of the biggest traitors in US history.