Bolshevik Bernie Sanders entered the crowded Democrat Swamp with his Comrades, the other Snakes and Rats on Tuesday, February 19, 2019

This comes after President Trump’s historic speech against Socialism on Monday in Miami. Source

Bernie speechless when asked about Venezuela 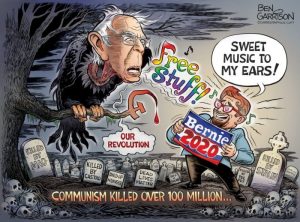 Will they cheat him once again? He is not the darling, Kooky Kamala Harris is right now!

The 77-year-old independent senator from Vermont, who started his political career as a gadfly perennial candidate, remains a pacesetter of progressive politics in America, helping to craft a liberal agenda that includes everything from Medicare for All to a $15 minimum wage to free college tuition. “Three years ago, during our 2016 campaign, when we brought forth our progressive agenda we were told that our ideas were ‘radical,’ and ‘extreme,'” Sanders said in the email. “These policies and more are now supported by a majority of Americans.” Read more here

Bolshevik Bernie has joined arms with the Muslims and other Jew haters!

Bernie Sanders to Muslim Rep. Ilhan Omar’s anti-Semitic tweets: “We will stand by our Muslim brothers and sisters”

Sen. Bernie Sanders (I-VT) on a conference call hosted by Jim Zogby, Co-Chair of the DNC’s Ethnic Council, when asked about the controversy over Rep. Ilhan Omar’s tweets about AIPAC:“I talked to Ilhan last night to give her my personal support. We will stand by our Muslim brothers and sisters.” See whole article here

Another Socialist, Communist, Jihadist also said that Muslims were His brothers and sisters. That being none other than the False Prophet Pope Francis!

During the popes visit to America he stopped by a “Synagogue of Satan” formally known as St. Patrick’s Cathedral, an incubator of the disease. Revelation 3:9 “Behold, I will make them of the synagogue of Satan, which say they are Jews, (substitute supposed Catholic Christian) and are not, but do lie; behold, I will make them to come and worship before thy feet, and to know that I have loved thee.

The first words out of mouth of the false prophet, according to the ABC News Transcript, were to his Muslim brothers and sisters.

“I would like to express two sentiments for my Muslim brothers and sisters: Firstly, my greetings as they celebrate the feast of sacrifice. I would have wished my greeting to be warmer. My sentiments of closeness, my sentiments of closeness in the face of tragedy. The tragedy that they suffered in Mecca. In this moment, I give assurances of my prayers. I unite myself with you all. A prayer to almighty god, all merciful.” Read more at  The Disease of False Religion Part 1

What does ole Bolshevik Bernie believe?

From God Voter – Bernie Sanders is Jewish by birth and upbringing but is hardly one today. Born in New York to a Jewish father who immigrated from Poland and a US-born Jewish mother, Bernie Sanders grew up attending a public elementary school in the morning and a Hebrew school in the afternoon.

As is traditional for Jewish boys, Bernie Sanders celebrated his bar mitzvah – the coming of age ceremony that marks the age of accountability – on his 13th birthday.

During his early 20s, he traveled to Israel and even lived in a kibbutz – the Jewish collective community – for a few months.

As his adulthood progressed, however, Bernie Sanders drifted away from Judaism. At 47 years of age and 22 years after his first marriage to a Jew ended in divorce, he married a Roman Catholic (see Bernie Sanders background).

What does Bernie Sanders believe today?

He recently declared during a speech at a Christian university:

“I am motivated by a vision which exists in all of the great religions – in Christianity, in Judaism, in Islam, Buddhism and other religions – and which is so beautifully and clearly stated in Matthew 7:12. And it states: ‘So in everything, do to others what you would have them do to you, for this sums up the law and the prophets.’“ – Bernie Sanders, Liberty University, September 22, 2015

While he correctly quoted the words of Jesus (see Jesus Resurrection Proof), Bernie Sanders’ assertion is unfounded. In sharp contrast to Jesus’ command above to treat all human beings fairly, Islam’s Mohammed, for example, commanded “infidels” – i.e., non-Muslims – to be killed and oppressed:

“Kill the infidels wherever you find them and capture them and besiege them and sit in wait for them at every place of ambush.” – Quran 9:5

Who is the God of Bernie Sanders?

“I think everyone believes in God in their own way. To me, it means that all of us are connected, all of life is connected, and that we are all tied together.” – Bernie Sanders, The Washington Post, January 27, 2016  Source

Also see Bernie Sanders Platform as it is the same as the Democrat platform. Bernie claims to be an Independent!

🚨Uncovered video🚨@BernieSanders in 1985 praising the Communist Castro regime in Cuba and admitting on camera that he traveled to Nicaragua to advise the Ortega regime on how to successfully fight the United States. pic.twitter.com/qYtpvbVvCS

Bernie also went to Russia on his honeymoon with his Catholic wife that doubled as an official trip while mayor.

Sen. Bernie Sanders admits that he went to Yaroslavl, Soviet Union to establish a “sister city” program after he got married when he was mayor of Burlington, Vt.

Question? Why did he go to a Communist Country, with 10 of his fellow Communists from America, to establish a “sister city”? Why not pick a city here in America? I think we can surmise the answer to that question!

Both of them can be seen drunk and shirtless singing with Russians in the video below. What were they singing? “This land is your land”!

This is prophetic in that they were singing to the Russians that THEY would help give America over to Communism.

“This land is your land and this land is my land, From California to the New York island, From the redwood forest to the Gulf Stream waters, This land was made for you and me”