Dave Hodges | Common Sense Show – Please let me remind everyone of Trevor Louden’s work, Enemies Within, in which Trevor showed proof that many Democratic leaders belong to front groups for the world’s largest terrorist organization, the Muslim Brotherhood, and/or the American Communist Party. 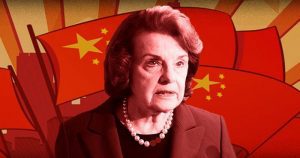 In 2007, the FBI attempted to solicit information from citizens in Chinatown regarding Communist Chinese subversion directed at the government of the United States. The FBI ran an ad, in three Chinese language newspapers operating in Chinatown, asking for informants to come forward. Instead of obtaining informants the FBI drew criticism from Rose Pak and her close ally, Senator Dianne Feinstein who criticized the FBI for their prejudicial behavior. This issue solidified the relationship between Communist Chinese agent Rose Pak and Sen. Feinstein.

The New York Times, the Washington Post and the LA Times has never seen fit to report the story that Senator Dianne Feinstein had employed a Chinese spy for over two decades. This major media blackout is as concerning as the event itself. Of course we know that the Bezos (ie Amazon) ownership of the Washington Post had previously entered into a $600 million deal with the CIA. So much for journalistic integrity. This media collusion speaks to the fact that the left, including their mainstream media minions are seeking to overthrow this country.

From the Weekly Standard:

Five years ago, Senator Dianne Feinstein, the California Democrat who then chaired the Intelligence Committee, was approached by the FBI. The bureau had learned that a staffer in her San Francisco office was a Chinese operative “run” out of Beijing’s consulate in that city

… no charges were filed against the driver. Feinstein’s press secretary ignored requests for comment on this story; her office has issued standard boilerplate to media outlets saying that the senator was “mortified” by the revelation that she had a spy on her payroll.

Feinstein and her husband have a long relationship with China and enormous personal and professional investments. Few media outlets have pointed out that Feinstein has had Chinese spies in her office before. So it was not a surprise to those who follow this odd Chinese love affair that yet again a spy was found in her office — her driver and office manager of 20 years.

If China is embedding spies in the Senate offices of people willing to advance the agenda of the communist state, one must assume they are actively influencing other industries as well.

Feinstein’s husband, Richard Blum, has made billions with regard to investing in the Communist Chinese country. He has used his wife’s senatorial contacts list from China in order to facilitate further business with Communist China.

Perhaps a reminder is in order when I remind everyone that a virtual state of war exists between the United States and nation of Communist China. Communist China has attempted to illegally close the South China Sea to trade. The Communist Chinese have troops in Venezuela, they are in the Middle East and Africa and they are there to oppose what they call “American imperialism”. The Chinese have repeatedly threatened the United States with war. Presently, the United States is locked in a vicious trade war, which often precedes a shooting war. As Alexandra Daley, Marilyn Rupar and myself have conclusively presented the facts that demonstrated conclusively that the Communist Chinese run the Sinoloa drug cartel which controls the politics, law enforcement, drug trafficking, and human trafficking in Humboldt, CA. Feinstein is complicit in this unholy alliance.

I recently interviewed Chris Kitze and Chris clearly demonstrated that the Communist Chinese Party runs Chinatown inside the United and until her recent death, Rose Pak was the Chinese key agent. Paul Preston validated most of Chris Kitze stated on the CSS.

Both of my sources indicated that the late Rose Pak had deep ties both Kamala Harris when she was the Alameda County District Attorney and she was close with Senator Dianne Feinstein! A sitting US senator had a chummy relationship with Rose Pak an agent of the Communist Chinese.

Before Pak’s death in 2016, she controlled the police, the politics and the underworld in San Francisco. This point was not lost on the local politicians. A case in point, can be found with Mr. Aaron Peskin, the San Francisco Board of Supervisors member who proposed the name, has previously criticized Pak, identifying her as an agent of China. In short, the Pak forces got to Mr. Peskin and “persuaded” him to change his mind on naming the new subway after this communist subversive. However, Supervisor Peskin’s knowledge of Paks ties to Beijing were well documented:

“Rose Pak has been able to work with people to get undue influence in gaining city contracts and in gaining land use approval to build new buildings in San Francisco. “It is really about the political influence and how political influence works, and that even includes working with and representing the interests of outside governments from San Francisco. I am happy to name those names, and those names include the People’s Republic of China.”

Peskin made the preceding comment in an interview with New Tang Dynasty (NTD) Television during the 2011 San Francisco mayoral election.

The only reason for the controversy over naming the station after the Communist Chinese serving Pak was the grave concern about her close ties with Beijing’s communist regime and her involvement in corruption in local politics with San Francisco’s underworld.

Feinstein Mourns the Passing of Pak

Is anyone surprised at the fact that Feinstein and Pak were friends?

“I am deeply saddened by the passing of Rose Pak, one of Chinatown’s and San Francisco’s leading public figures‎.

“I have known Rose for decades and observed with great admiration her tireless efforts to improve the lives of San Francisco’s Chinese community.

“No one could question Rose’s unparalleled devotion to her community—she gave every ounce of her being to serving others.

“Rose was always spirited and determined. She made her positions clear and did all she could to achieve her goals. Whether or not you agreed with her, there is no question that she was an indefatigable leader.

“We will all miss her ‎indomitable spirit. May she rest in peace.”

Finally, I have covered, on multiple times about how Richard Blum has bought up distressed farmland from farmers that have been driven from their land by either the BLM or the EPA, only to have Blum sell the distressed land to the Chinese. This practice has greatly helped the Communist Chinese government effectively deal with their national food shortage.

Please keep in mind that these farmers are represented by Senator Feinstein!

Can there be any doubt that Senator Dianne Feinstein, just like the late Rose Pak, is an agent of the Communist Chinese government.  She is guilty of violating the Logan Act and she is a traitor. People of California, why is she still in office 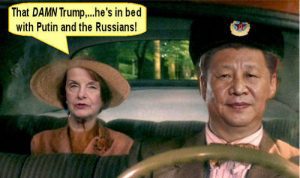