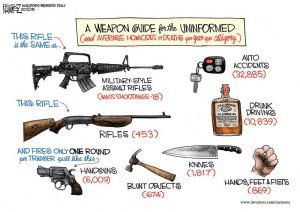 An article about the report in Guns in the News made an interesting point:

Before we go on, it is important to mention that handguns were responsible for the majority of firearms deaths. It is also important to point out that all firearms deaths combined made up the majority of all murders in the United States. Of the 14,123 murders in 2018, 10, 265 of them involved firearms — a 7 percent drop from the previous year. That being said, the number of rifle deaths is extremely important given that this is the weapon most often targeted by gun grabbers.

These statistics show the illogic of the recent calls by “progressive” politicians to ban so-called assault-type rifles such as the AR 15. “ Hell, yes, we’re going to take your AR-15, your AK-47,” 2020 Democratic presidential candidate Beto O’Rourke recently said to a crowd in Houston, Texas.  Read more at Zero Hedge

Church Of England: The UK Must Ban “Pointy Knives”

Mac Slavo | SHTFplan – The Church of England is demanding that the United Kingdom use force and violence to ban pointy knives. A religious organization is now insisting that crime be reduced by further enslaving the population.

Last year, London’s murder rate briefly overtook that of New York City, a feat likely to be repeated as crime continues its decline in the U.S. while the latest U.K. figures show an increase in violent crimes committed with both guns and knives. In spite of all the laws restricting ownership of anything that could constitute a weapon, violent crimes are getting much worse. Instead of giving people more freedom and the human dignity of being able to defend themselves against these attacks, religious organizations and the government want to take steps to make sure only those committing violent acts have the means to do so.

“We the undersigned are professionals and community leaders from across the UK who call on Government to see the sale of pointed domestic kitchen knives as a thing of the past,” reads the not-a-parody open letter from the Diocese of Rochester, signed by church leaders, lawmakers, psychiatrists, academics, and the like. “Historically we needed a point on the end of our knife to pick up food because forks weren’t invented. Now we only need the point to open packets when we can’t be bothered to find the scissors.”

When the human condition resists perfection through legislation, the answer always seems to be more – and stupider – laws.

Just months ago, a Conservative member of Parliament made headlines when he took a different, but equally restrictive, approach to regulating sharp pieces of metal, reported Reason.

“Every knife sold in the UK should have a GPS tracker fitted in the handle,” insisted Scott Mann. “It’s time we had a national database like we do with guns.”

Mann took a lot of ribbing for the proposal, and even admitted that it was “a bit of a shit idea.”

But that’s just because he was a step ahead of the mob. If he’d stuck with grinding off the pointy bits, he would likely have been hailed as a model of responsible opinion.

UK: Kitchen Knives Are Too Sharp! Filing Them Down Will Stop Stabbing Violence

Knife control is supposed to be a joke—where control freaks take their next efforts when gun laws prove unenforceable and criminals decline to discontinue their efforts just because they’ve been rendered even more illegal. But British politicians took that joke and turned it into national policy. Now they want to double down on that policy because the bad guys still won’t play along.