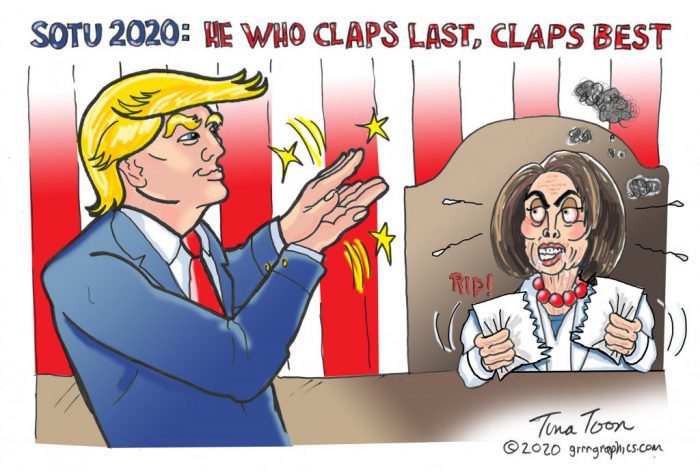 By John C. Velisek – US Navy, Retired – All News Pipeline

Nancy Pelosi succeeded in making a total fool of herself and the rest of her cabal at the State of the Union the other night. In a pre-planned move, she showed her pettiness at the end of the speech. During the speech, she made a point of acting like she could care less what the President had to say. The entire spectacle was pre-planned for no other purpose than to make the President look bad and made it all about her.

What happened instead is that it made Pelosi look senile, petty, and totally out of touch with the conditions we have in this country. She claims she did it to point out how everything the President said was not true, and she did it to get the attention of the American people. It definitely did that and showed the insanity that runs the party. She is right; she doesn’t need any lessons from anybody; she is the vile old lady that she has always been, void of dignity or any moral compass.

Acting as if she is superior to anyone else, she claims her morality is above reproach. To believe that, she has to hope that she and her husband can explain dealing with the Presidio Partners and later the Presidio Trust. Interesting is how her son was also a part of that and also was a board member of a Ukrainian energy company, much like Hunter Biden.

She later sent out her pet gerbil bobblehead Drew Hammill to spit venom at the Vice President, perhaps not knowing that there was a video of Her Highness tearing the pages ahead of time during the speech. Videos that show the tears that Pelosi put in the papers that would make it easier for her to tear for her big moment.

Hammill stated that there was conspiracy between the Vice President in saying that he thought the entire episode was pre-planned. Hammill needs to leave his position and not discuss the Constitution. After all, it was his party that tore up the Constitution in an effort to remove our President. And just a point you may want to keep in mind little Drew, don’t ever call anyone else a puppet while you sit there slobbering and bowing to your Highness, the senile Pelosi. 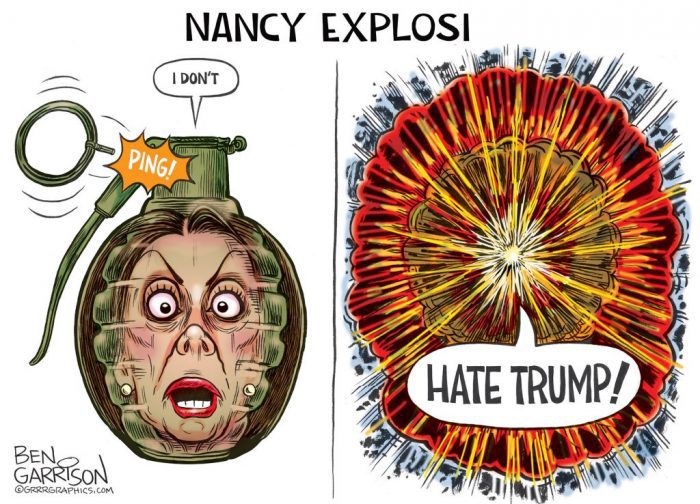 (ANP EMERGENCY FUNDRAISER! Following Susan Duclos’ recent heart attacks and hospitalization, All News Pipeline will need some financial help in the days and weeks ahead. So if you like stories like this, please consider donating to ANP to help keep us in this ‘Info-war’ for America at a time of systematic censorship and widespread corruption.)

(ANP: All of the cartoons in this story thanks to Ben Garrison and Tina Tune at GRRRGraphics.)

Acting like nothing more than a senile old bitty, this harridan went out of her way to attempt to steal the thunder of the State of the Union. She whined and complained about the President, not shaking her hand. It is said that President Trump may not have seen it, I honestly don’t know. Even if he did, if it was me, I wouldn’t shake her hand.

Even putting the impeachment and all its lies aside, I wouldn’t want anything to do with a bible-thumping, “prayerful” Catholic who supports abortion on demand. What the progressive socialists won’t tell you is that she purposefully truncated the traditional introduction for the President. Not saying “I have the high privilege and distinct honor,” the traditional opening of all State of the Unions since the first one. Even the New York Times called it petty and vindictive.

Pelosi has shown her high degree of partisanship by presenting the State of the Union by President Trump as a manifesto of mistruths. That she could find a single page without a lie on it is the reason she tore it up. Her statement has caused me to ask some questions. Was it a mistruth when President Trump lauded a 100-year-old Tuskegee airman or was the awarding of a scholarship to a six year old girl to attend the school of her choice an untruth. Was the survival of a child born as 21 weeks a mistruth, or a military man reunited with his family, was that untrue?

Pelosi wants nothing more than she wants the power of the government on her side, to use as she wishes, and to hell with the people. She showed long ago and proved every day that her acting as a harridan was to be her legacy. She even went so far as to claim she thought President Trump was sedated at the State of the Union, something that had no basis.

She used Charlottesville once again, although it was shown to be a leftist lie pushed by the media long ago. 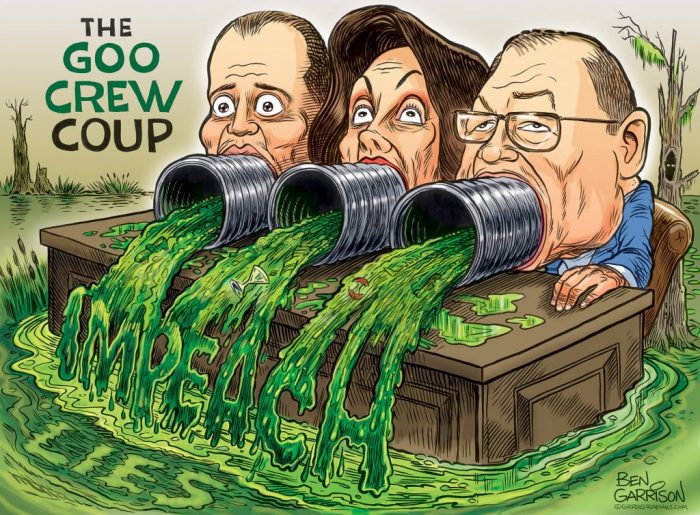 But like the leftists are prone to do and have done since the 2016 election, they will lie. Just like the lie that the President is impeached forever is a lie. The progressive socialists will use the fact that prissy Adam Schiff lied badly and held the impeachment process in the House to the lowest standard possible. The impeachment was a farce from the start, and they all know it. Following the progressive socialist line instead of the truth is more important to them.

Nothing that they can do at this point will ever keep the temper tantrums the progressive socialists have shown ever to be forgotten. Pelosi, Schiff and the other lackeys in the plot have been trying to remove Trump for three years and will continue to do so. The Pelosi hissy fit may have made her white shrouded acolytes in the audience happy, but disgusted those who believe in the values we have in our country, including some Democrats. And contrary to the whining of Rashida Tlaib, Petty Pelosi, and many other members of this swarm, President Trump was acquitted and is not impeached forever. Besides, do they think saying that will make a difference after what the American people have been subjected to? You can railroad the President as much as you like, the American people know better.

Pelosi has gone so far as blaming Mitch McConnell, the Senate Majority Leader, as being in cahoots with the President in hiding the Russian plans for the 2020 election. Claiming that they have done nothing to stop election meddling, perhaps she should look at what this administration has done. The safeguards in place are much more than in 2016. But of course, Petty Pelosi will say nothing about the illegal alien voter fraud throughout the United States. Knowing that these illegal aliens will vote for those giving them all the benefits they want will be a boon to the progressive socialists.

It is time for the moderate democrats to speak up, to take back the party they have worked all these years to bring to this point. Full-term abortion, opening of all borders, Medicare for all, the New Green deal, are turning your party against itself. More and more Democrats will vote for President Trump because of all the progress our country has made over the past three years. It is time for the Democrat Party to throw off the progressive socialist and show that they care for our country again. It is time to get back to the core democratic values in our country.