What does this say about Hillary Clinton or the rest of the Clowns? 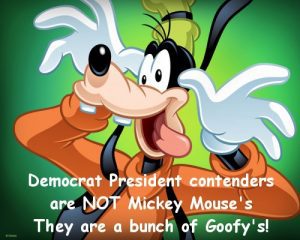 Problem is there are no Mickey Mouse’s running. There are a bunch of Goofy’s though!

In an interview with MSNBC’s Morning Joe Tuesday, Biden, 77, claimed President Trump is so bad that even Bernie Sanders’ socialist policies could beat him if he were to secure the Democrat nomination.

“I refuse to suggest any Democrat can lose,” Biden said, adding, “I think we could run Mickey Mouse against this president and have a shot.”

A studio audience erupted in applause at the comment.

Considering Hillary Clinton lost to Trump in 2016, it’d be interesting to hear what she’d think about Biden’s remark.

"You’re a lying dog-faced pony soldier." – @JoeBiden to a young woman voter in NH who asked him about Iowa caucus. This really happened. 😱👀pic.twitter.com/Z4LcZqj4dD