Skip to content
Illegal Aliens Regret Crossing Into US After Son
‘Our child is worth a lot more than this country.’
Adan Salazar | News Wars – A Honduran family is regretting their decision to cross illegally into the US after the journey cost their son’s life.
In an interview with Rio Grande Valley ABC affiliate KRGV, the Bonilla family recounted the tragic circumstances that led to their seven-year-old son Ezequiel’s death, and said they would have reconsidered making the trek if they’d known the devastating toll it would require.

“His parents say the hope of something better is now gone.”
The Bonillas said they were living a good life in northern Honduras until debt from medical bills began piling up, at which point they chose to attempt illegally crossing into the US not knowing the dangers of Texas’ natural southern border, a 50-100 yard stretch of brown water known as the Rio Grande River.“
[The human smugglers] put a lot of people in the raft, but it was broken and it was overweighted so halfway down the river the raft flipped over,” the boy’s mom said.
The boy’s uncle reportedly screamed for help as he watched him sink into the murky waters.
Border Patrol agents recovered the boy’s 10-month-old cousin, who also died that day, but Ezekiel’s body didn’t turn up until a week later, when the boy’s clothing, including socks and shoes, were discovered.
“We can blame ourselves for coming here, but that’s not going to bring my child back,” Ezekiel’s mother lamented.
On KRGV’s Facebook, however, readers placed the blame squarely on the irresponsible parents. 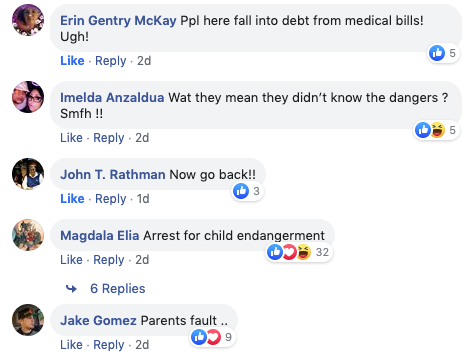 It is unclear what, if any, charges the parents will face, but their story should serve as a cautionary tale for others intent on risking their families’ lives to violate US immigration laws.
If you go to the store to buy Meat, don't run to the Milk section or the Junk Food aisle looking for it!!