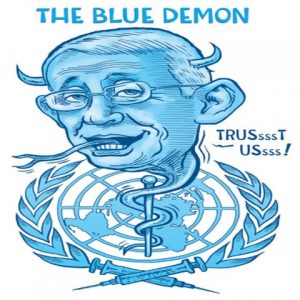 The transfer agreement was signed by multiple parties between December 12th and 19th of 2019.

According to the official narrative, the World Health Organization (WHO) became aware of a pneumonia outbreak in the city of Wuhan on December 31, 2019.

Not until January 9, 2020 did WHO release an official statement regarding the novel coronavirus found in a hospital patient in Wuhan.

One of the signees of the transfer agreement, Dr. Ralph Baric of UNC Chapel Hill, has extremely close ties with the Wuhan Institute of Virology.

In the material transfer form, Fauci and Moderna ask Baric to “perform challenge studies with the mRNA vaccine in a (redacted) model as described on Exhibit A.”

However, “Exhibit A” is also redacted in the document.

Dr. Shi Zhengli, infamously known as the Wuhan “Bat Woman,” was a lead researcher alongside Baric until she left the UNC-Chapel Hill lab for the Wuhan Institute of Virology.

In fact, Zhengli and Baric published a paper in 2015 describing, “A SARS-like cluster of circulating bat coronaviruses shows potential for human emergence.”

How would they know the cluster specifically associated with the Chinese horseshoe bat shows potential for human emergence?

Well, in their own words, they “built a chimeric by encoding a novel, zoonotic CoV spike protein—from the RsSHC014-CoV sequence that was isolated from Chinese horseshoe bats.”

While “gain-of-function” research was banned in America in 2014, the 2015 Baric/Zhengli paper admits, “Continuation of these studies was requested, and this has been approved by the NIH.”

Interestingly, a note at the end of the research paper explains the authors originally omitted the fact that EcoHealth Alliance (EHA) funded their work.

EHA is the same group Fauci’s NIH used to funnel money to the Wuhan Institute of Virology where Baric’s co-worker Dr. Shi Zhengli is the lab director.

EHA’s president, Peter Daszak, was also the only American sent to Wuhan to “investigate” the lab leak theory, which he unsurprisingly dismissed.

In fact, as lead investigator for the WHO investigation, Daszak determined within 3 hours of visiting the Wuhan lab in February 2021 that there was “nothing to see here.”

With Daszak’s obvious conflict of interest regarding the Wuhan lab and gain-of-function research now making headlines, he was just recused from his position as head investigator looking into COVID origins for the medical journal The Lancet.

After Dr. Ralph Baric experimented with gain-of-function research, he created the coronavirus treatment drug Remdesivir for pharma giant Gilead, a company that has received over $6.5 billion from Fauci’s NIH in the past few years.

Now, Baric has teamed up with scientists to create another money-maker in what they call a “universal vaccine” that targets coronaviruses.

“The vaccine has the potential to prevent outbreaks when used as a new variant is detected,” said Baric.

“With this strategy, perhaps we can prevent a SARS-CoV-3,” a co-creator of the universal vaccine ominously stated.

In 2018, Baric spoke at a conference on the 100-year anniversary of the 1918 Spanish Flu Pandemic and explained one day somebody could sell vaccines to people who want to vaccinate themselves at home.

“Most likely, somebody will come up with a way to sell that in a legal way, not a safe way,” he said.

Could the “universal” coronavirus vaccine he just helped create be marketed for at-home use?

Baric even detailed how one could hypothetically “make money in the next pandemic,” providing a “global catastrophe opportunities” chart.

See the full speech below.

Another entity that would like to keep the origins of COVID-19 a secret is the Chinese military, which was on the record conducting secret research at the Wuhan Institute of Virology.

A new report by the Washington Post, an outlet that previously denied the lab leak theory, acknowledges classified military research was carried out at the lab and that records will almost certainly remain sealed by the Chinese government for two decades.

“The secrecy may help to explain why efforts to confirm or disprove the lab-leak theory of the pandemic’s origins have made little progress,” the report admits.

As Rep. Mo Brooks (R-Ala.) recently asked, why would a group of scientists intentionally take dangerous viruses that don’t harm humans and alter them in order to do so if not for military purposes?

This reporter didn’t see it coming

By the way… if anyone was wondering why the internet overlords are censoring the lab leak theory, it could be the fact that Google has been funding EcoHealth Alliance for over a decade.