I guarantee you there are Communists in EVERY school, and University across America! They are even in the So-called Christian Schools and Universities!!

They are brainwashing your Children and Grand-children to be hard core Socialists, which WILL turn them into hard-core Communists if not STOPPED NOW!

This COMMUNIST, and ALL like him, should be arrested, charged with insurrection, convicted, and properly hung! 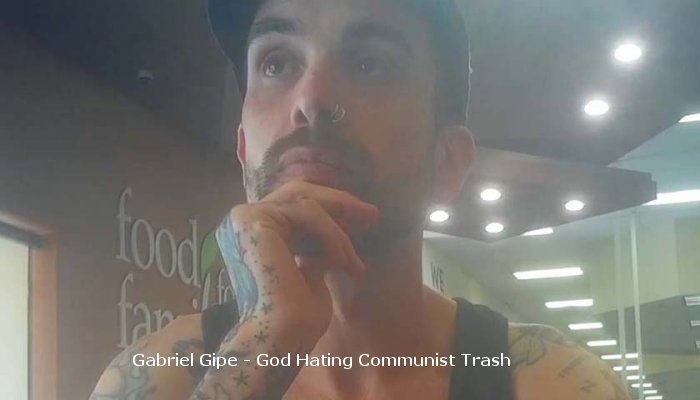 Poor Lamb! Antifa Teacher on the Run, Claims He Fears For His Safety and Job After Project Veritas Blows His Cover

Kevin Downey Jr. | PJ Media – As I reported yesterday, the heroes at Project Veritas released an undercover video showing a proud antifa communist teacher bragging about how he has 180 days to indoctrinate his students and make them Marxists. How does he do it? He “scares the f*** out of them.”

Now the proud commie peacock is running scared. He refused to defend himself to another Project Veritas reporter. He claims he fears for his safety, and is worried about his teaching gig, which means he KNOWS what he was doing is wrong.

Even his fellow Antifa clowns aren’t happy with him.

In the tweet below, fellow antifa stains bemoan Gipe’s willingness to spill his commie guts to an undercover Project Veritas reporter. They also question his over-zealous approach to indoctrinating young high school kids and turning them into fellow Marxist comrades.

Some highlights from the undercover video:

There is a school board meeting scheduled for tonight. Gipe’s lawyer suggested he not show up.

Some of the #antifa accounts are furious @NatomasUSD teacher Gabriel Gipe accidentally exposed what they're up to. They also say he was too overt in introducing students to far-left extremism. He should have been more subtle to avoid detection in the classroom, they say. pic.twitter.com/1bZV9puNYV

A Project Veritas reporter tried to speak with Gipes, clad in a communist t-shirt, as he was taking a walk with his wife and dog. He didn’t have much to say. The same reporter went to the school principal as well as the school district for interviews. He was blown off by everyone, as can be seen in the Twitter videos below.

Antifa extremist & @NatomasUSD teacher Gabriel Gipe was approached by a black journalist. He & his wife, Elaine Nye (who he says shares his beliefs) walk away. Project Veritas also approached school for comment & they called police on the black reporter. pic.twitter.com/6aBXqpiHLV