Yea, you can feel the changes coming alright. A change just like the slogan of the Muslim Barack Obama. A change from Freedom and Prosperity to a Communist dictatorship with starvation and slavery which is the final product of ALL Communist and Socialist countries!

So just what is Comrade Warren Wilhelm Jr.’s change?

H/T to StanDeyo.com for the image and link to verified info on Comrade de Blasio! 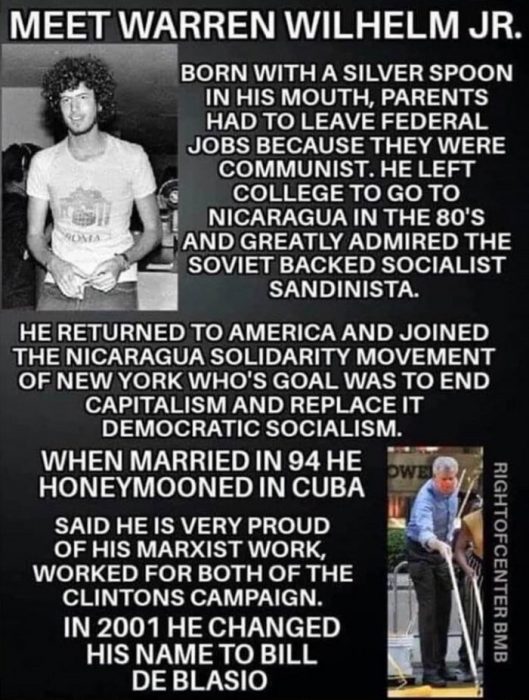 De Blasio’s policy initiatives have included new de-escalation training for officers, reduced prosecutions for cannabis possession, implementation of police body cameras, and ending the post-9/11 surveillance program of Muslim residents. In his first term, he implemented free universal Pre-K in the city. De Blasio has called attention to what he calls stark economic inequality in New York City, which he described as a “tale of two cities” during his first campaign. He has supported socially liberal and progressive policies in regard to the city’s economy, urban planning, public education, police relations, and privatization.

In 1984, de Blasio worked for the Urban Fellows Program at the New York City Department of Juvenile Justice. In 1987, shortly after completing graduate school at Columbia, de Blasio was hired to work as a political organizer by the Quixote Center in Maryland. In 1988, he traveled with the Quixote Center to Nicaragua for 10 days to help distribute food and medicine during the Nicaraguan Revolution. De Blasio was an ardent supporter of the ruling socialist government, the Sandinista National Liberation Front, which was opposed by the Reagan administration at the time. After returning from Nicaragua, de Blasio moved to New York City, where he worked for a nonprofit organization focused on improving health care in Central America. He continued to support the Sandinistas in his spare time and joined a group called the Nicaragua Solidarity Network of Greater New York, which held meetings and fundraisers for the Sandinista political party. De Blasio’s introduction to city politics came in 1989, when he worked as a volunteer coordinator for David Dinkins‘ mayoral campaign. Following the campaign, de Blasio was an aide in City Hall. In 1990, he described himself as an advocate for democratic socialism when asked about his goals for society.

The NUT did not fall far from the tree!

His mother, Maria de Blasio, attended Smith College, served in the Office of War Information during World War II and authored The Other Italy: The Italian Resistance in World War II (1988). His father, a Yale University graduate, worked as a contributing editor at Time Magazine and also served in World War II. In 1942, he enlisted in the U.S. Army and was sent to the Pacific War. During the 82-day Battle of Okinawa, a grenade detonated below his left foot, and his leg was later amputated below the knee. After receiving a Purple Heart, he married Maria in 1945, and became a budget analyst for the federal government. During the 1950s, at the height of the Red Scare, both Maria and Warren were accused of having a “sympathetic interest in Communism” Source: Wikipedia

McCray published an essay in Essence in 1979 entitled “I Am a Lesbian”. In that essay, McCray “frankly discussed her sexuality and expressed gratitude that she came to terms with her preference for women before marrying a man” McCray met Bill de Blasio in 1991, when they both worked at New York City Hall for then Mayor David Dinkins. At the time, de Blasio was an aide to a deputy mayor and McCray was a speechwriter. McCray and de Blasio were married in 1994 in Prospect Park, Brooklyn. Asked about her sexuality, McCray has stated that she hates “labels”. In 2012, when asked about her 1979 essay, she commented: “In the 1970s, I identified as a lesbian and wrote about it. In 1991, I met the love of my life, married him.” Source: Wikipedia

He Loves Pedophiles too!

An employee under the De Blasio administration and president of Manhattan Young Democrats has been arrested for allegedly being in possession of thousands of files containing child pornography. Jacob Schwartz, 29, was taken into custody on last week after investigators found on his computer more than 3,000 images and 89 videos depicting children engaging in sex acts on an adult.

He had been under investigation since March after willingly handing over his laptop. Schwartz surrendered himself on Thursday, and his father told the New York Post following his arraignment that Schwartz is obtaining therapy.

“How [the police] came to him I do not know,” he told the New York Daily News. “He’s going to be undergoing psychosexual therapy to get to the root of this issue.”

“If the alleged actions are true, it really seems like a product of someone with a psychological problem calling out for help—not to evade the law,” Roth asserted. “He surrendered his computer and gave them consent to search.”

My oh my what interesting stuff you find when you turn over rocks!

Dermot Shea, NYPD Commissioner, blames the rise in crime on policies that released inmates from Rikers Island during the coronavirus pandemic and cut $1 billion from the NYPD’s $6 billion annual budget.

Neighboring police departments are refusing to aid/assist the New York police because they feel the New York’s new policies are putting to much strain on their departments, and placing their officers at risk of litigation if they find their knee in someone’s back or chest during a lawful arrest.  The State Troopers are responding in the same manner.

“It opens them up to criminal and civil liability for restraining a person during a lawful arrest in a manner that is consistent with their training and is legal throughout the rest of the state. Furthermore, this legislation will prevent Troopers from safely and effectively arresting resistant subjects,’ he continued.  ‘Anyone who has ever arrested anybody who has fought and struggled knows that there is a good chance that your knee may end up on someone’s back,’ Monahan said earlier this month, according to NY1. ‘It’s a big issue to our cops.’

Monahan called the new law ‘insane’ and predicted that crime would continue to rise if police were barred from using force on suspects who resist arrest.  Source: Daily Mail

I have to ask, on what data/facts/evidence does “Delusional de Blasio” base his opinion that “Says Emptying Prisons Made NYC Safer Than Ever”?  Is he an idiot? Or simply doing his job, promoting the Socialist Agenda?

‘We now have fewer people in our jails than any time since World War II, and we are safer for it and better for it,’ the mayor said.  Ya, there are fewer people in jail because they are being let loose in outrageous numbers across the nation, even as honest citizens are being threatened with jail/prison time just for refusing to wear a mask.

Let us not lose sight of the fact that there are still a lot of people who are not even on the street due to the COVID 19 scare and mandatory lockdowns.  What will happen when our streets are once again crowed on a daily basis and all those criminals are loose among us, with no police protection available?

Further Info on Emptying Jails: Emptying jails is a dangerous fantasy: The city must remain safe an keeping violent people on Rikers Island is no ‘death