Do you wonder why the Criminals, Pedophiles, along with other Sexual Perversion is rampant and nothing is being done? 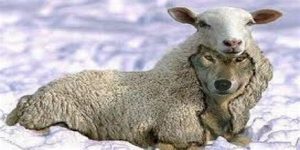 It is because MOST of those in LAW ENFORCEMENT and POLITICS ARE the Criminals, Pedophiles, and Satanic Deviates.

It is the Lunatics running the Insane asylum!

It is a pack of Wolves watching over the Sheep!

It is the Foxes guarding the Hen house! Damn it People open your eyes and wake the HELL up!

And that is why these BASTARDS (Hebrews 12:8) get away with what they get away with! It is one of their buddies they are protecting! The DOJ will not identify this SOB!

The Fake News Outlets will not aggressively pursue and identify this SOB either. Their ranks are filled with Pedophiles, Homosexuals, Lesbians, Trannys and other Deviates!

In fact, he whole damn system is filled with them and includes Luciferian’s, Satanist’s and Witches! Now wonder God is letting this plague and other disasters happen!

WE ARE UNDER JUDGMENT PEOPLE! WHAT PART OF THAT DO YOU NOT UNDERSTAND!

Survey: Most people are  COWARDS and won’t talk about Politics!

Chuck Ross | Daily Caller – A senior FBI intelligence analyst admitted during a polygraph test that he viewed child pornography of girls as young as nine years old, according to a report of the investigation obtained by the Daily Caller News Foundation.

The analyst, who is not identified in the report, was fired from the FBI, but the Justice Department and its child exploitation unit declined to file criminal charges against him.

The report goes into greater detail about the investigation into the analyst than did a summary of the probe released by the Justice Department’s inspector general in April.

That summary said that the supervisory intelligence analyst (SIA) admitted to viewing and downloading child pornography several years earlier, but did not give any other details about the nature of the content.

The investigative report, which the DCNF obtained through the Freedom of Information Act, paints a more disturbing picture of the analyst’s activities.

The analyst admitted during a routine counterintelligence polygraph that “viewing and downloading [child pornography] of girls ranging in age between 9 and 17,” the report said.

The analyst initially said he preferred pornography of girls between 15-17, before eventually acknowledging to having a preference for images of girls as young as 9 years old, and those “just starting to show signs of maturation,” according to the report.

The report said that the polygraph examiner conducted an interview with the analyst after he showed countermeasures, which are tactics intended to cheat a polygraph test.

The report said that investigators with the inspector general’s office substantiated that the analyst knowingly possessed child pornography, a felony violation, but the Justice Department and its Criminal Division’s Child Exploitation and Obscenity Section declined prosecution.

No identifying details of the SIA are included in the report. His position as a top intelligence analyst would suggest he worked for years at the bureau.

The FBI did not respond to requests for comment about the report, or the SIA’s identity.

This story originally was published by the Daily Caller News Foundation.