They sure look alike! Justin Trudeau is a Bastard Spawn of some Communist! 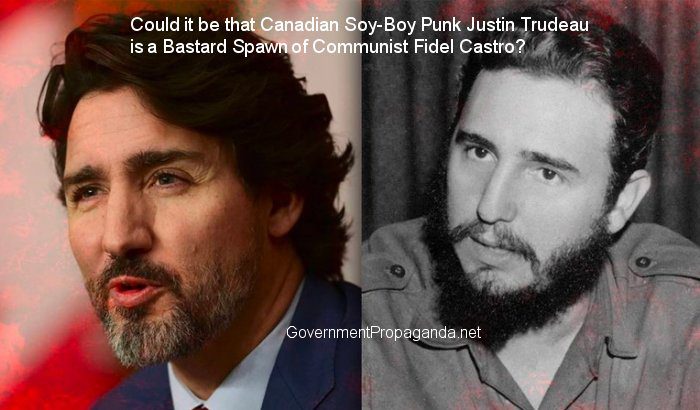 Like Castro, Canadian prime minister has transformed his country into a dictatorship — but there are other more compelling similarities.

And if you did not know, the Sins of a Father are handed down to his offspring! Its where the saying “Like Father, Like Son” comes from!!

If not biologically, then certainly ideologically!

Ben Garrison got it right! 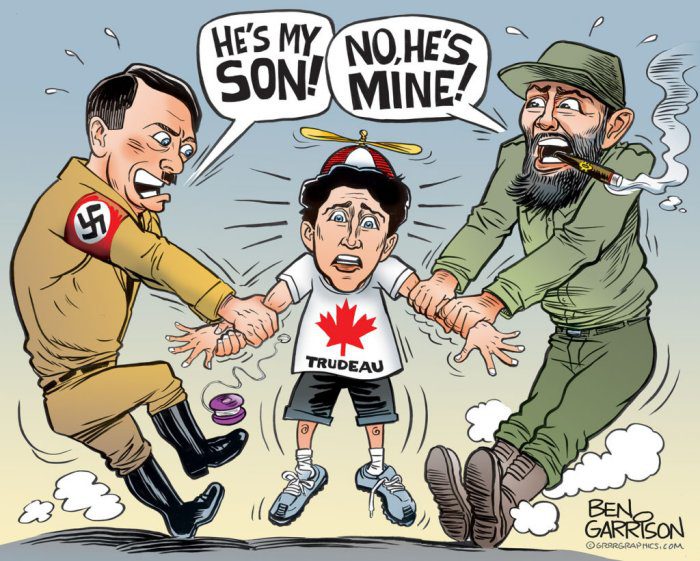 Robert Spencer | Jihad Watch – The rumors have been circulating for years: it’s easy to find side-by-side photographic comparisons of Fidel Castro and Canadian Prime Minister Justin Trudeau, showing the strong physical resemblance between the two. This rattles the establishment media to the extent that they “debunk” it regularly. Last Saturday, the New York Times ran a piece entitled: “An old falsehood resurfaces: that Justin Trudeau is Fidel Castro’s son.” On Tuesday, the Daily Beast chimed in with “Truckers Resurrect Bananas Theory About Trudeau’s Real Dad.” True to form for the establishment media, neither addressed the points journalist Karen Leibowitcz made in favor of the claim in 2020, but while the question is interesting, what is far more important is that whatever the true story of his parentage may be, in bringing authoritarian rule to Canada, Justin Trudeau has now shown himself to be the ideological son of Fidel Castro.

No one should be surprised by this. Trudeau has a long record of affinity for authoritarian governments. In 2013, before he was prime minister, he was asked what country he admired most. Trudeau answered, “You know, there’s a level of admiration I actually have for China because their basic dictatorship is allowing them to actually turn their economy around on a dime and say ‘we need to go green fastest…we need to start investing in solar.’ I mean, there is a flexibility that I know Stephen Harper must dream about, of having a dictatorship that he can do everything he wanted, that I find quite interesting.”

And when Fidel Castro died in 2016, Trudeau’s statement gave no hint of the bloodthirstiness and repression of the Communist regime in Cuba. Instead, Trudeau was fairly gushing with praise for “Cuba’s longest-serving President.” He declared that “Fidel Castro was a larger than life leader who served his people for almost half a century. A legendary revolutionary and orator, Mr. Castro made significant improvements to the education and healthcare of his island nation.”

Trudeau acknowledged that Castro was a “controversial figure,” but insisted that “both Mr. Castro’s supporters and detractors recognized his tremendous dedication and love for the Cuban people, who had a deep and lasting affection for ‘el Comandante.’” He said that his family was joining “the people of Cuba today in mourning the loss of this remarkable leader.”

Now we can see that this was not just an ill-considered outpouring of grief for a man Trudeau obviously loved dearly. His praise for China and for Castro have in common an admiration for the authoritarian’s ability to get things done with no regard for the opposition or the give-and-take of the democratic process. China was able to go green and Castro was able to make significant improvements to education and healthcare (in Trudeau’s view, not in real life) because they didn’t have to deal with all the carping and compromise that working with parliaments and voters entails.

And now Trudeau can rid himself of the Freedom Convoy, and seize the protesters’ bank accounts, without having to wait for court orders and worry about due process. If old Fidel can look up from his fiery grave and see what Trudeau is doing, he must be pleased. What’s even worse, however, is the silence of the world. One of the world’s foremost free republics is turning into a police state before our very eyes, and Trudeau has not been denounced by anyone. Old Joe Biden’s handlers, of course, aren’t going to say anything, because they would do the same thing to dissidents here if they thought they could get away with it. But none of the other leaders of ostensibly free societies seem to care either. Maybe they’re all Leftists who, in the indelible words of David Horowitz, harbor within themselves a totalitarian who is screaming to get out.

In a sane world, the Canadian opposition would already have secured a no-confidence vote against Trudeau, with significant assistance from members of Trudeau’s own party who oppose authoritarian overreach and the denial of civil rights to Canadian citizens. Trudeau would also be up for condemnation at the United Nations and by international human rights organizations. Ironically, if he were a prime minister in Africa or Asia and did exactly the same thing that he did in setting aside the civil liberties of his political opponents, those condemnations would be raining down. But for some reason, Justin Trudeau doesn’t appear to be in political trouble either domestically or internationally, at least thus far. It’s a sign that other countries in the once-free West are almost as bad off as Canada is.

Justin Trudeau is a tyrant. He is the sort of tyrant that the United States of America was founded to oppose. Canada, of course, is the country of the North Americans who opposed the American Revolution, so perhaps it is fitting that it would be the first of the two countries to fall into tyranny. But Canada also has a proud tradition of freedom and respect for human rights and the rule of law. May it prevail now, against the ideological son and heir of Fidel Castro, Justin Trudeau. Posted with permission from Robert Spencer