Proverbs 21:19 “It is better to dwell in the wilderness, than with a contentious and an angry woman.” 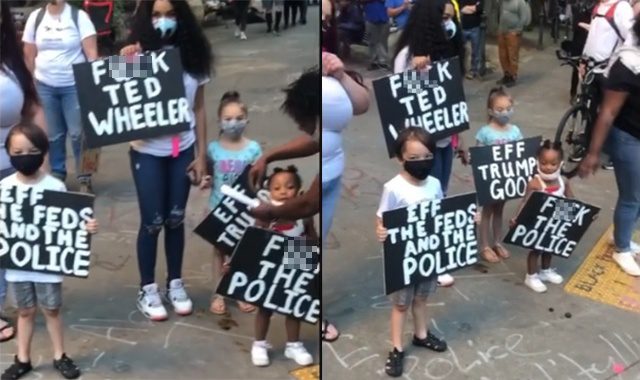 Video shared on social media Wednesday shows Black Lives Matter activists brought toddlers to the Portland federal courthouse where riots were taking place and had them hold vile signs saying “F**k the police” and repeat the slogan on cue.

Luke 17:2 “It were better for him that a millstone were hanged about his neck, and he cast into the sea, than that he should offend one of these little ones.”

As Andy Ngo noted, one toddler threw up the black power fist.

Toddlers and very young children are marched outside the Portland federal courthouse. They carry signs and say, “F— the police” on cue from the adults. One toddler does the black power fist. #BlackLivesMatter pic.twitter.com/Xr4ubMrKZs

Other Portland “moms” were seen using their unborn children as human shields to protect the rioters:

Nothing like putting your fully formed baby at risk by bringing your 9 month preggo belly to a riot for woke points. pic.twitter.com/AYCxmWxfDd

Proverbs 22:6 “Train up a child in the way he should go: and when he is old, he will not depart from it.”

This is not new. These dregs of society have been training their children to be racists and hate any kind of Law for a long time!

And then you have this!